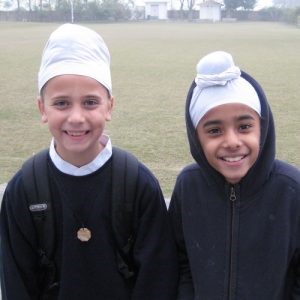 Excerpt from a post by Gurumustuk Singh on January 16, 2010

During my days in Amritsar I spent most of my time at Miri Piri Academy and being with Narayan. I was really impressed with how Miri Piri Academy has grown. The school is beautiful and the kids are really great. Every afternoon after school I had fun playing sports with the kids which was great. I wish I had a school like this when I was in boarding school 25 years ago in India. Whenever I see parents with kids I always try to encourage them to check out the school.

Often times other parents can’t believe I would send my kid away to boarding school. Generally people feel that having your kid in a school in America would be much better. My experience is that sending your child to MPA isn’t just about getting a good education, it’s so much more! The school has a great balance of typical school education with spiritual development which you would never get at home. It’s one of those things that is hard to explain. When you see the kids who go it is self evident. This year Jugat Guru Singh (Chardikala Jatha) took a much larger leadership role in the school as Co-principal and is doing a great job!

It was really nice seeing my son and how he had changed so much in the 4 months that he had been in India at MPA. It’s amazing how much he changed in just this short period of time. When I first saw him at the airport in Delhi running towards me it was like seeing a different kid that was much more grown up.