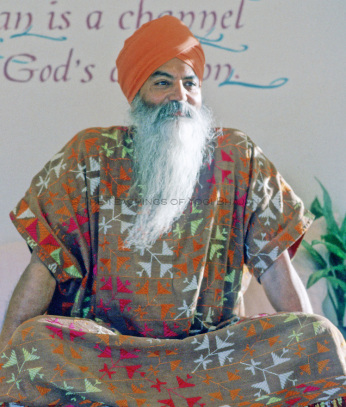 As a professional in the Hotel-Hospitality-Food Service Industry, I had the divine blessing of serving Yogi Bhajan at La Scala Restaurant & Boutique on Canon Drive in Beverly Hills during 1990 and 1993.

With Guru Singh of Yoga West in West Hollywood as his driver who came to dine with him, along with usually 8 or10 others in his entourage, Yogi Bhajan would come in for the famous Chopped Salads, minus the salami and cheese, extra garbanzo beans.

He frequented the restaurant 2-4 times a week. We would know in advance when he’d be coming by a considerate phone call ahead of time. With or without that phone call, the right or the left booth by the window was automatically held open for him until after 12:45pm before releasing it to other guests, as he had a standing reservation with us.

He’d usually arrive at around 1pm when it was swiftly announced to me and the other staff that, “The King is coming!” When Yogi Bhajan came through that door, the entire room could not only feel, but see his presence, all 6 foot 4 of it!

We addressed him as Harbhajan or sir, but secretly, among the staff, we called him “The King” to communicate the needs at table 11 or 31, whichever the case may be. Upon arriving he’d come up to the counter with a warm smile for me and the others while I was usually making Cappuccino’s or Latte’s. He never left his humor at the door, but instead, hurled it with snippets of hidden teachings attached.

Often he’d start with, “How come you drink so much coffee?” I’d always reply, “The coffee is for my guests sir.” “Who is drinking all that coffee? Do they know that they will be over stimulated by such caffeine? Maybe you will encourage them to drink Yogi Tea! Much better for the body,” he’d say, then wave and smile as he’d go on to be seated.

From the onset, I always wondered who these beautiful people were. Gracefully dressed in white and so respectful of everyone in their presence and each other. I never inquired formally back then. I felt I didn’t want to disturb the blissful flow of service while dining. I simply served what they’d asked for and gently observed from a distance.

I could definitely sense that these people were breaking bread with the higher power that I was still seeking to know but hadn’t yet grasped. I was fresh faced with 4 years of sobriety and could always feel an emotion of uplift in his presence, while feeling strangely safe. He was authentic!

His attitude and altitude cut through that of the mostly pretentious and celebrity clientele of the day. I could see the love emanating from his aura and the spirit of his entourage was blatantly different and I can remember how it felt—warm like the sunshine upon my face on a summer day in Southern California.

I phoned my mother after some months who had been a follower of Paramahansa Yogananda since the 60’s. I asked her who the people dressed in white were. She knew of them and immediately informed me that they were Western Sikhs and he was Harbhajan Singh from India. She said, “Continue to do your homework and simply observe.” My mother spoke well about Yogi Bhajan and the Sikhs, telling me they are a good people with great values. Her words to me were: “Rub elbows with them. Their Grace will be upon you!”

It wasn’t until nearly 21years later that I found Kundalini Yoga. I was in search of something deeper than what I had known as my truth. I was divinely guided to Golden Bridge, Hollywood, for my first class.

I have since been to India twice in two years, where I attended Teacher’s Training with Gurumukh and Gurushabd in Rishikesh the first year. Just this past January I met up with a small group at Amritsar’s Golden Temple, prayed at the 84 steps at Goindwal, visited Anandpur Sahib, Keshgarh Temple, and many other beautiful, historical and ancient sites.

One of the loveliest highlights was being blessed to stay at the ashram at Yogi Bhajan’s home at Dashmesh Sahib while attending one of the first Sikh Dharma Ministry Yatras. It was plentiful with depth and weight.

I have been called. I took Amrit in July during the ceremony at Summer Solstice at Ram Das Puri, Espanola. As one beautiful soul to another put it so firmly to me, “It’s like going to the school on the first day to register. Now the practice, discipline and study has begun and continues for a lifetime.”

My life is off and running, or perhaps I shall say, I’m often sitting still while staring at my nose and vibrating the cosmos. I am in gratitude that I remain teachable and to be able to practice the teachings by way of Yogi Bhajan is my daily bread…a gift!

I am grateful from the bottom of my big toe’s to the tip of my tenth gate.
In honor of Yogi Bhajan, I have been blessed, Wahe Guru!