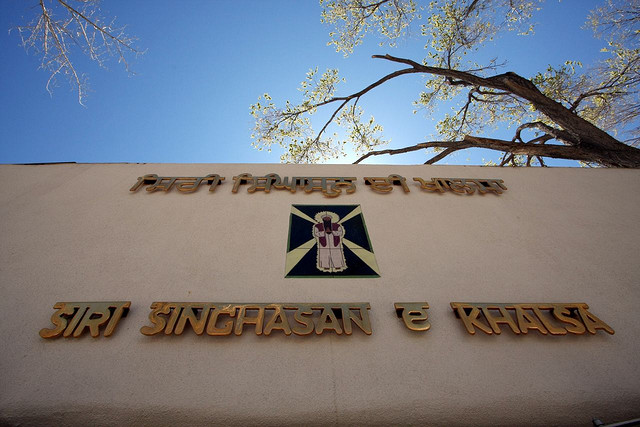 This is “Part 1” of Mukhtiar Singh sharing his experience participating in the large renovation that took place on the Siri Singhasan e Khalsa gurdwara at Hacienda de Guru Ram Das in Espanola, NM at the end of the 1980s/ beginning of the 1990s.  He also shares how he experienced Yogi Bhajan’s input about that renovation.

The plan was that the addition to the Gurdwara would take a year.

Work would go on all week, with others, who could join, helping out on the weekends.  First came the excavation and demolition.  The entry on the west side was torn out and the hill leading to it was cut back and leveled.  The trenches for the foundations were dug and prepared for concrete.  Don’t kid yourself, it wasn’t all hand work, there was a small budget for the project, heavy equipment was used for digging.

The walls of the Gurdwara were built with a technique called rammed earth.

It similar to the local style of building with sun dried mud bricks, in that it used sandy clay that could be dug up from the yard.  Instead of making bricks though, slightly moist dirt, mixed with fly ash, would be poured into aluminum forms and then compacted.  The fly ash acted as a binder similar to concrete.  The compaction was done with “pogo sticks”.

They were like skinny jack hammers, with one person on each pogo and hoses for compressed air hooked up to the giant compressor.

As the walls grew higher, the forms would be moved up and the dirt below would form a self-standing independent structure.  Once the walls were up, concrete was poured making a bond beam around the top perimeter to unify the building.  With the bond beam in place, the vigas were hoisted up and nailed to together with boards for a ceiling.  That was the basic box of the building.

The Siri Singh Sahib had asked that the addition be built, but he clearly wanted the Gurdwara to be our project, directed by us.  A committee, including anyone with input, suggested designs, with the entire community approving the final plan.  All the money used, was raised from the Sangat.

However, on any further input he was silent.

The Siri Singh Sahib’s lack of input wasn’t for our lack of trying to get it.  Secret agents were placed, with instructions to bring up the issue in the normal course of the day.  He remained silent when the topic came up.

Someone got tricky, on a drive to a meeting at the Akal Security Headquarters. They started going in direction which would drive past the construction, allowing him to see progress on the project.  He had the car change and took the long way around.

At the spring Baisakhi Day celebration in Los Angeles, in the bazaar, I set up a table with a collage of photos and a little rented TV played an endless loop video created by Siri Ved Singh, to let the nation of the Sangat know what was going on at the Mother Center.  The Siri Singh Sahib stopped at each of the other two hundred venders, but somehow missed my table.

Later in the spring, a wedding was celebrated; it was the double wedding of Jiwan Shakti Kaur with Siri Nirongkar Singh and Sat Hari Kaur with Guru Gun Gian Singh.  This was the first marriage of the people now known as the second generation.  The only venue big enough was the gymnasium at the elementary school right across from the Gurdwara.  Of course, the Siri Singh Sahib had to attend.

The Siri Singh Sahib saw the complete structure as he passed by to the wedding, he did not stop in for a tour.  He did not make it evident that he was looking, or make his reaction known.

What he did ask was; “This is a Gurdwara.  Where is the Dome?”