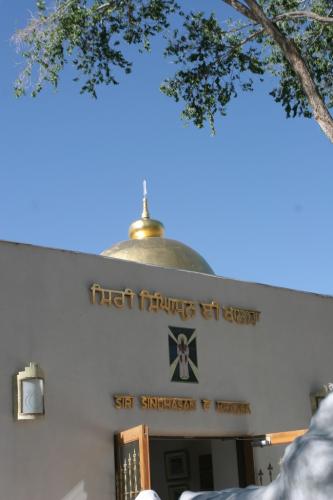 This is “Part 2” of Mukhtiar Singh sharing his experience participating in the large renovation that took place on the Siri Singhasan e Khalsa gurdwara at Hacienda de Guru Ram Das in Espanola, NM at the end of the 1980s/ beginning of the 1990s.  He also shares how he experienced Yogi Bhajan’s input about that renovation.  Read “Part 1” here.

The Siri Singh Sahib was serious. He said what he meant and meant what he said. The Gurdwara needed a dome.  He called a meeting of the key builders and explained a dome would signify that our temple was not just a holy place, it was the Court of the Guru. The Dome must be covered in gold, not just painted, or looking like gold, it must be covered in real gold.

To meet its purpose, the Dome needed to be built on the west end of the roof so that it would be over where the Guru presided at court.  We knew we wanted the Dome to be large so there would be no mistake that it was important.  Other than that, we didn’t have clue how to proceed.  There was a thought of hiring some outside dome builder, but there was not enough time or money, even if we could find someone to do it.  We would have to make it ourselves.

Amrit Singh came up with a plan of making a hollow structure from strips of plywood and ribbing.  That gave us a basic structure which would be light enough not to compromise the structure of the roof, like a solid dome would; it also gave us the basic shape to start with.  But the Dome at this stage was flimsy, and of course, not something we could cover in gold.

Then Simran Singh came up with what was an impossibly brilliant idea.

Make the dome like one would make a surf board.

Surf boards are built with a foam core which is shaped, and then covered in fiberglass.  That process creates a very strong, light, rigid structure that flows with compound curves and shapes.  Just the thing we wanted for our Dome.

Simran Singh covered the outside of the wooden framing with stucco paper, then shot expanding insulation foam over it all.  Thing is, the foam was all lumpy.  Here is where it became evident that Simran Singh was either a madman or a genius.

He made up a profile template, attached one end to the top, and the other end where the foam covered frame rested on the roof.  He then proceeded to make up and down passes over the entire surface with a handheld router.

Each pass shaped less than an inch of the profile at a time.  The passes were all step by step, and there were more passes than anyone could ever keep track of.  On top of the shear work of cutting the foam while hanging from a ladder in the wind, a certain terrible type of dust was created by the cutting that went everywhere and stuck to everything.  The job he did was heroic, yet at the same time, like most everything heroic, utterly and completely, insane.

Finally he had the shape he wanted.  Fair was fair, he was the artist, and the man doing the work, he got final say.  Then, as an additional reward, he got to mix the epoxy and lay up the fiberglass.  To those who are not familiar with laying up fiberglass, especially a project this large, let’s just say there are reasons that there are now OSHA standards for the workplace.

Our dome has a simple shape, beautiful in its own right, though perhaps not classically consistent with Sikh architecture.  In time, someone will want to transform it into a Dome with more style and grace.  That may very well happen, and it may be a change for the better, but it is also good to remember that, we are where we are, with a chance to glance at the sky, because we stand on the shoulders of others.