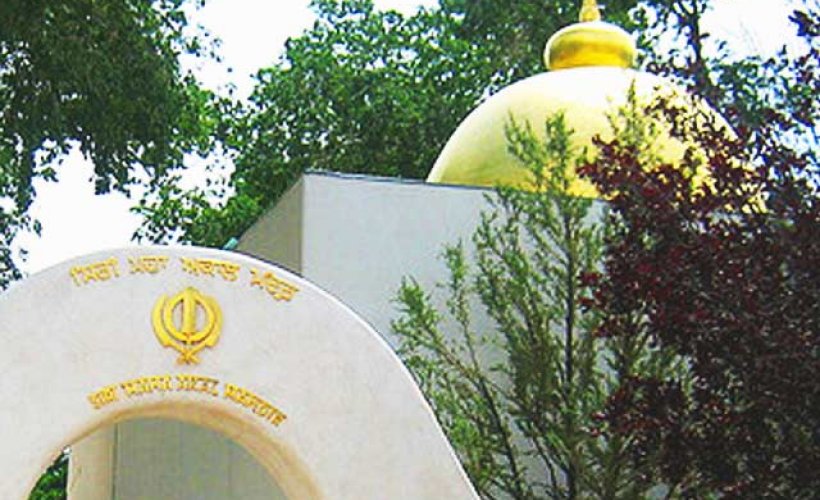 Once the Dome had a good solid structure and a smooth surface, the detail remained of how to cover it with gold.  Ceramic or glass tiles with gold glaze were discussed, but remember, this was before the days of internet, eBay, Amazon, or Alibaba, there was no access for us to such tiles, and if anything like that was commercially available, it would very pricey.

The Golden Temple at Amritsar has its gold applied to copper using a process involving the application of high heat and mercury, it was clear that we would not be able to duplicate that technique for our project.

In the course of his travels in Santa Fe, Gurukaram Singh came across a place called Gold Leaf Framemakers.  He stopped in out of curiosity.  He figured if these guys knew about putting gold on picture frames, maybe they could steer us in the direction of a process which could work.

Turned out, Marty Horowitz, the owner, had devoted his life to the gilding process and loved the idea of applying gold to objects on a big scale.  We had found our guy.  Marty figured, if we put up the scaffolding and tarps to create a wind shield, he could get a large group of volunteers from his gilding students to help, with the cost of gold at that time being about $150 an oz., the whole thing could be pulled off for $25,000.

Now, the budget for the entire Gurdwara project was significantly under $100,000, including everything needed to move in.  So, of course, covering the Dome in gold, created a whole new challenge; but somehow despite our misgivings, we figured out the money.

The process used is called oil gilding.  A varnish, called sizing is applied, and allowed to cure to the correct amount of tackiness.  The sizing then acts as glue onto which gold leaf is placed.  Gold leaf is 24k gold hammered into 3 & 3/8 inch squares (85.7mm), so thin that light can be seen thru it.  The leaf is so thin and delicate that the mere act of moving it from its storage book can be enough to rip it.

This why enclosing the dome in a wind shield was so important.  The project got started, scheduled for a weekend.  The sizing was sprayed on the surface, and allowed to cure for 12 hours.  The next morning the volunteers arrived and started laying down the leaf.  Everything was proceeding well and everyone was in great spirits.  Slowly, slowly, the wind started to appear.

At first, it was just a gentle breeze; hardly enough to notice.  But, as wind is want to do, it gathered in strength.  The tarps were not enough to keep out all the wind.  The tradeoff was, of course, with the wind, the gold leaf was harder to handle.  But to stop meant applying new sizing and re-assembling the crew for another day, which could be just as windy.  The decision was to push on.

Gold was in the air, in the blades of grass and in the trees, like glittering shiny snowflakes.  Children were playing with the gold.  Gold was in their hair and on their clothes.  It was a scene never before seen, and unlikely to ever be seen again.  For months later, gold was found in the most unlikely of places.

Somehow, despite Mother Nature, the dome was covered in gold that day.

Every event is viewed differently from different eyes.  Marty looked at the flying gold as a loss, and wanted an extra payment for the effect of the wind.  We were happy to pay extra, for we had been unsure, until it was actually done, that the Dome would get the gold it must have.

In the end, the Guru, had no doubt.  There was never any hesitation as to where the process would come from, who would do the work and were the money would come from.

The Guru had called the wind to help celebrate.