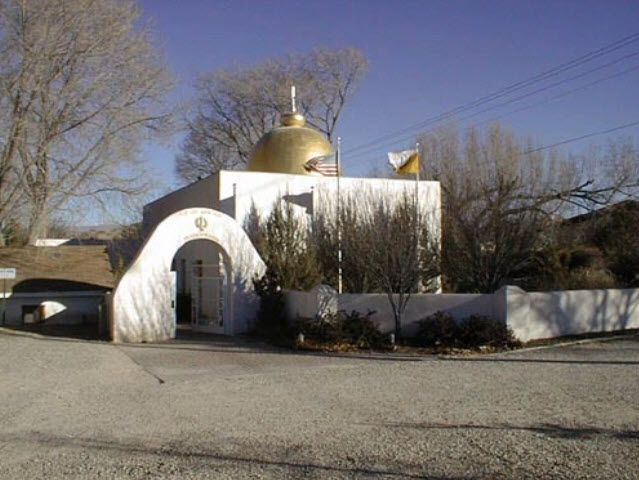 Even though the major part of the gilding was done on the Dome, there were little bits and pieces yet to be complete.  A khanda, or sword, was to be added as a finishing touch to the very top.  The khanda was carved out of steel and mounted on a wooden finial.  The Khanda, with its finial, was brought to Marty Horowitz at Goldleaf Framemakers, who had gilded the rest of the Dome, to have gold leaf, applied.

The next day we got a call from Marty.  Unlike his normally very self-assertive demeanor, Marty was kind of low key.  He said; “I know you wanted the khanda covered in 24k yellow gold, but would you, perhaps, consider another suggestion.  I have some palladium leaf.  Palladium is a precious metal usually about twice the price of gold, but instead of being a golden color it has more of a dull silver color which would more appropriate to the look of the khanda.”

Of course, Marty was the man.  If he was suggesting it, how could we go wrong?  We gave him the go ahead, and a couple days later we got the khanda.

When the khanda got picked up in Santa Fe, Marty told the rest of the story.  The night after receiving the khanda, he had a dream.  The dream had a big effect on him, and was the reason he had made the suggestion about the palladium.  In the dream, he was approached by a man with a very long beard, who, without speaking, pointed at the khanda, and then pointed at a project in Marty’s shop being done in palladium.  It was clear from the dream, that the man with the long beard wanted the khanda gilded with palladium.

It was the perfect choice.  The palladium made the khanda look as it should, a proper completion for the Dome.

Within a week of the completion of the gilding, there was a huge lightning storm.  All the lightning was a cause of great concern.  It is easy to understand that gold is a super conductor of electricity.  None of us had any experience about what would happen when a giant ball of gold is installed on top of a tall building.  We started to get quite worried.

There were a lot of experienced builders among us.  It is very rare that we would put up protection from lightning, but here we were dealing with unseen, unknown forces.

There was no rain, no wind, but the sky was lit with fire and thunder the whole night, with strikes stretching from the Jemez to the Sangre de Cristo Mountains.  He said it was the Guru returning the honor the Sangat had, in its innocence and love, bestowed upon the Guru.