White Tantric Yoga “The Longitude and Latitude, which Creates the Divine Human Attitude” 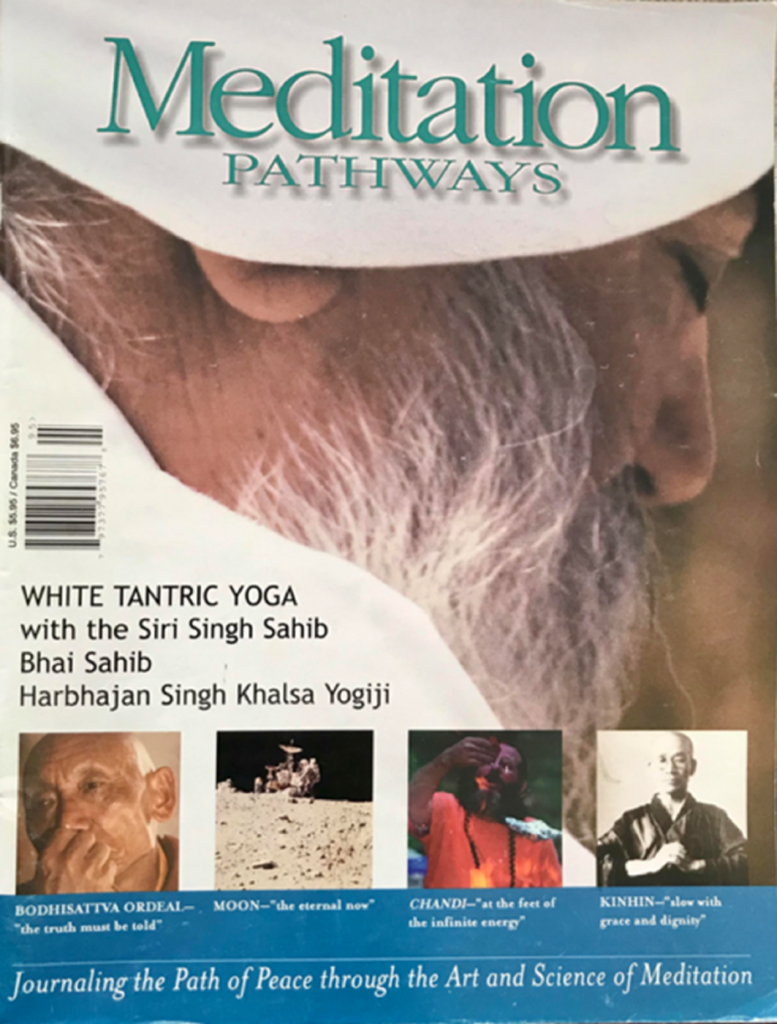 We’ve all been sitting here now for about 3 hours in the blazing New Mexican sun. We’re warming up for the first of five days of White Tantric Yoga with Yogi Bhajan, a man known to be the “Mahan Tantric.” I don’t know exactly what I’m ready for, but the warmups have been challenging enough, and I’m ready for a good long rest and shower. The sky is clear blue, and we’re surrounded by the evergreens and pines of the Pecos valley, and not far from a beautiful, cold river I’d like to jump into right now. I’m sitting here in a long line of men, facing a long line of women. We’re all in white, getting cooked by the mountain solar rays. The warmups have been a combination of chants, postures, and breathing practices. There’s a lot of abdominal breathing, and arm exercises. The instructor says that we’re strengthening and stabilizing the lower centers so that we can have the ability to remain balanced and elevated during the Tantric. Drinking lots of water, I’m ready to get into whatever’s coming.

When Yogi Bhajan arrives, there’s a great deal of activity around him. People are scurrying about with a mixture of fun, seriousness, and anticipation. Yogi Bhajan begins his welcome, by scanning the surface of the group. You can see his eyes, gazing above our heads and throughout the field. There are about five hundred people sitting in very straight lines. With his hands moving with various gestures, sensing the magnetic field of the gathering, he instructs people to shift for some mysterious reason. As all of this is going on he jokingly and earnestly talks about numerous topics of spiritual importance, such as relationship, destiny, the Earth, the Aquarian Age, becoming a leader, diet, meditation, yoga, and whatever seems to be flowing through him in that moment. 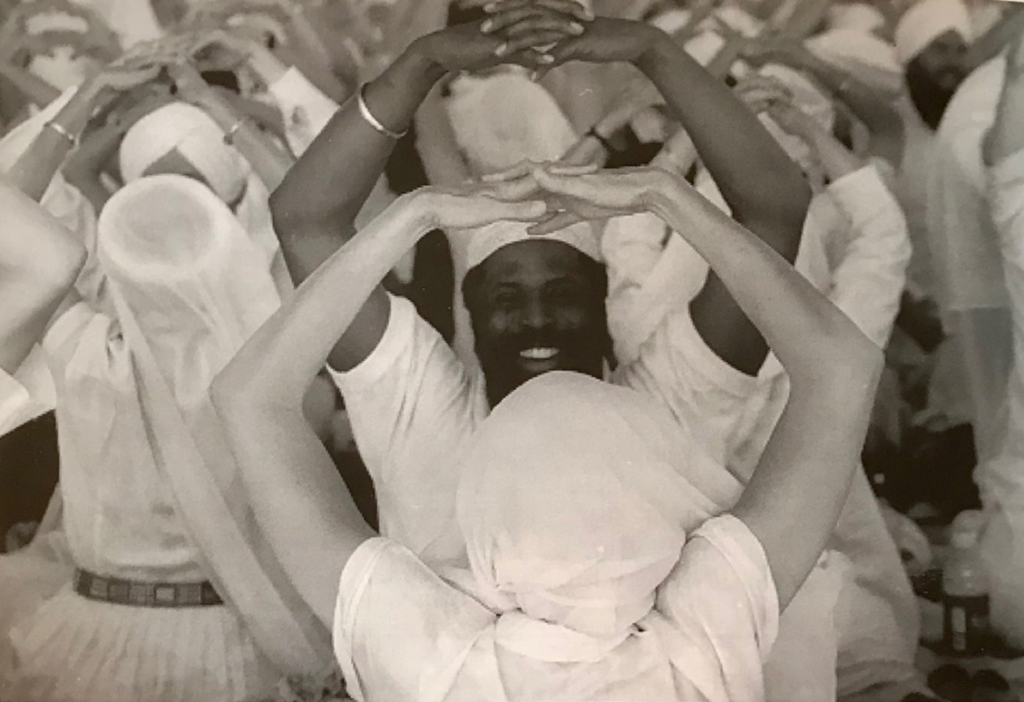 He explains what the Tantric will be working on that day, tells us to set our lines straight, and look directly into our partner’s eyes. He then tells us to bring our arms up into a 60-degree angle, begin with a synchronized breath between the man and woman, and start chanting. This goes on for over an hour. At some point, Yogi Bhajan exclaims, INHALE!!!!!! And HOLD!!!!!! And Exhale. We then rest, drink some water, stretch out, and get ready for the next exercise. This goes on for hours, often with someone I’ve never met before, but by the end of the day, through respect, honoring, and love, come to know very deeply.

“WHEN THE ONE-POINTED, INFINITE BEAM OF THE MIND, STARTS SENDING THE SIGNAL INTO THE INFINITY, AND THE INFINITY RELATES TO THE FINITE, THE UNIT BECOMES UNITED AND THIS IS CALLED THE HIGHEST STAGE OF THE YOGIC MIND.”   ~From “The Teachings of Yogi Bhajan” 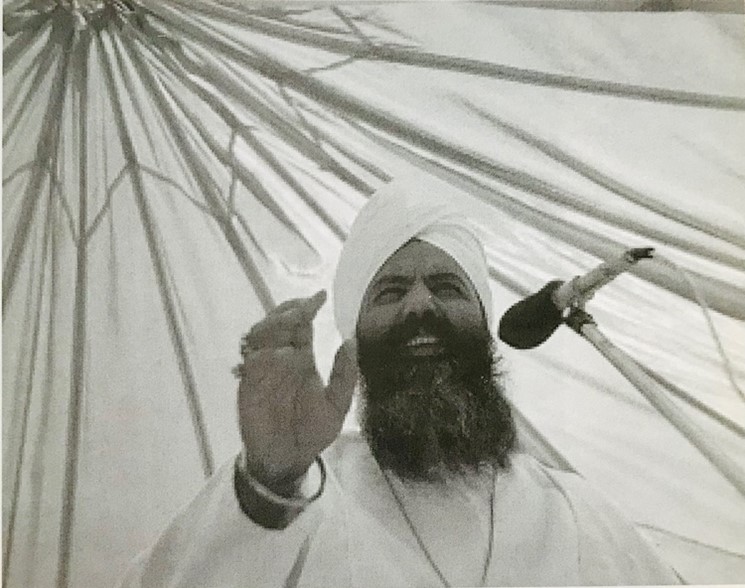 With one of the exercises with our arms up, gazing into each other’s eyes, breathing and chanting, I feel the pain of my partner. I feel like she’s about to pass out. Then I ask myself, is it her, or is it me? I feel myself re-centering, to help relax and stabilize our flow. In one split moment I realize that I’m the one about to lose it.  She’s the one feeding strength, and invincibility into the yoga. Moments of agony, moments of ecstasy. I begin to look into her left pupil because I can see our oneness there, and it feels like a good distraction from the struggle. That lasts for about two seconds, and I’m right back into the fire. I have to get out of myself. Now she’s disappeared! Where is she? She seems to come and go as I breathe. Now her form is changing. Many unusual faces, images, and shapes unfolding before my eyes. A gold Kwan Yin at my third eye?

Somehow, self lets go, and I experience the lightness of being held by the prana. My will isn’t doing this, there’s something else happening. Keeping my mind focused on the chanting, and my eyes linked with my partner, our energies align, keep us balanced, and support our arms. KEEP UP!!!! Yogi Bhajan resounds throughout the mountain landscape. When is he going to say Inhale?! With every breath I see directly what I hold onto as my truth. I hear we don’t stop, until the whole magnetic field turns blue. I think I’m turning blue! Okay, refocus, and let go…………..INHALE!!!!!!!!!!!!  It’s over, rest and live music follow. Songs of Universal love and happiness. Moments of deep peace and Heavenly relaxation. Mutual love, devotion, relief, and respect surge through the Tantric space.

“IN WHITE TANTRIC YOGA, ENERGY IS CREATED EN MASSE TO PURIFY THE PHYSICAL AND MENTAL BODIES. THE SOUL, WHICH IS ALREADY PURE, STARTS RELATING TO THE VERY EXISTENCY OF THE BEING.”  ~YB  (March, 1972, Washington, D.C.) 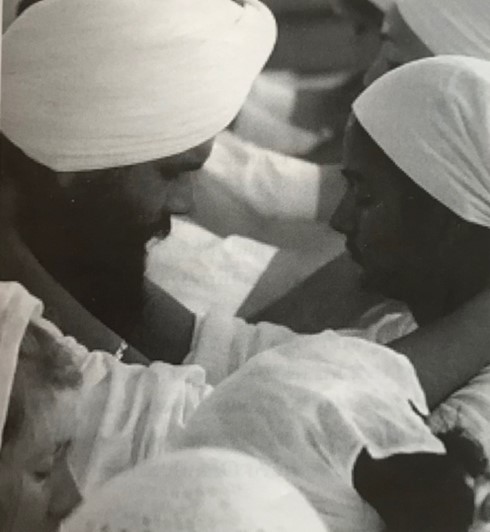 This is a moment’s flashback, of what I remember experiencing almost twenty-five years ago at my first White Tantric Yoga course during a Summer Solstice celebration, held in the Pecos Valley Mountains outside of Santa Fe, New Mexico.

Since that time, I’ve had the opportunity to do numerous Tantric courses throughout the country with either Yogi Bhajan, or one of his facilitators.

NAMO JO JOGE SVARANG.  NAMO TANTRA TANTRANG.
I BOW TO THAT SCIENCE WHICH UNITES ME WITH GOD.  I BOW TO THE FIBER OF CREATIVITY
~Guru Gobind Singh, JAAP 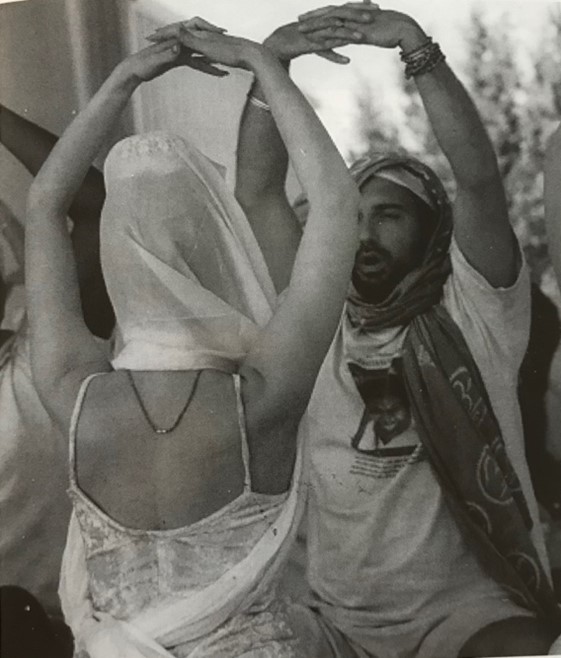 In talking with Yogi Bhajan the other day, he mentioned that his teacher was Sant Hazara Singh, who was the Mahan Tantric at that time. It’s said that he was a very great saint, who could recite the whole Siri Guru Granth Sahib (Sikh scriptures) by memory. Santiji would give them kriyas (exercises including postures, breathing, and mantra) that would last sometimes for hours on end. I remember one Tantric we did in Washington, D.C. in the seventies, where we kept our arms up for over an hour. It was excruciatingly painful. When we were complete with the exercise, he said he understood our pain, because his teacher had him do that exercise for eight hours. He said that the teachings of Tantric originated in India thousands of years ago, when “mankind wanted to develop a state of perfection.”

One morning in the Spring of 1971, Yogi Bhajan, also known as the Siri Singh Sahib, came out early from his morning meditation and announced to his students that an extraordinary thing had happened. The mantle of the “Mahan Tantric” had just been passed to him. He explained that when his teacher, Sant Hazara Singh, had left his body, that he had passed this sacred responsibility to Lama Lilan Po. With the passing of Lama Lilan Po, Yogi Bhajan states that, “he appeared in his subtle body and passed it on.” This event had far reaching effects on the teachings and vision of yoga for 3HO in the west.

By influencing our psyche at this level, we free our minds of desires, multi-realities, and perceptions which inhibit our evolution, and keep us imprisoned. “White Tantric disentangles the threads of insecurity from the layers of the subconscious. When these are removed, you can deal with things as they really are, rather than as your fear portrays them.” 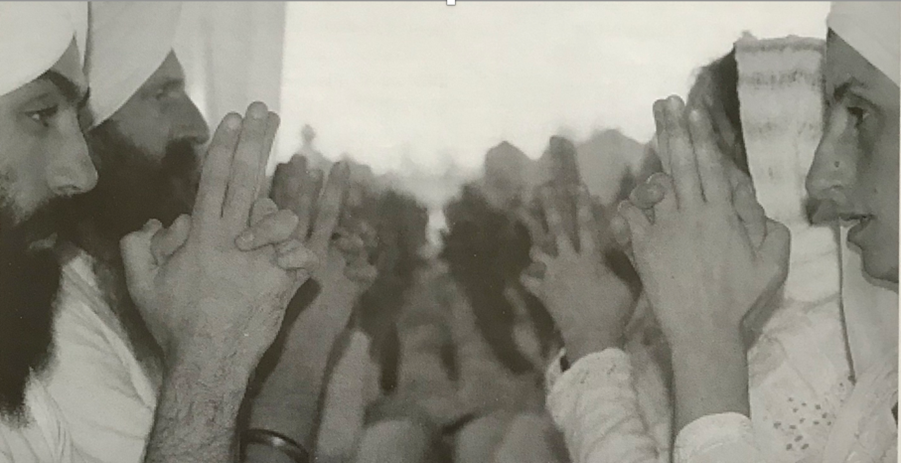 Tantric energy works with masculine and feminine, sitting in straight lines, across from each other, gazing into one another’s eyes. Yogi Bhajan says that the energy flows diagonally, in what he calls the “Z energy.”

“The energy from the person, crosses angle wise. If you are sitting before a woman, that woman’s energy is going to one man on the left, and one man on the right. They’re all knitted into each other.” It’s been said to envision the energy of the universe as parallel, or perpendicular in nature, like a cloth woven together. As a cloth becomes stronger when it’s stretched on the diagonal, so is the White Tantric, diagonal or “Z” energy, stronger. This energy, when directed by the Mahan Tantric, cuts through within the subconscious mind. “Tantra is the spun fiber of the Cosmos. Whosoever knows the diagonal energy knows the Will of God.”

In speaking about mind projection, he says that “your existence has a vibratory effect upon the whole universe. Wherever you are, whatever you do, even if you just crossed the road by the side of another man. In other words, in the mystic language it is said that anything which comes within the concept of your soul is influenced by it. What you see, what you hear, what you feel, what you touch, what you relate to, and whatever relates to you is influenced by the pressure of your vibration…”

Using the diagonal energy, the Mahan Tantric, Yogi Bhajan, connects his subtle body to the subtle bodies of the participants. This works the same way as a worldwide telephone system that relies on satellites and electromagnetic energy in order to connect two parties.

“During White Tantric, the infinite energy of the universe flows through the Mahan Tantric into all of the participants. White Tantric is no ordinary yoga. It cannot be practiced without the Mahan Tantric present, because it takes his mastery over emotions for it to be not only effective, but safe. Partners face each other in lines white the Mahan Tantric physically sits in front of the group, and projects his own astral body to encircle the group. He extends his own psycho-electromagnetic field to encompass the group aura. During a White Tantric meditation, a lot of subconscious negativity from each participant comes to the surface. In order to release that negativity without its projection onto the partner, the Mahan Tantric filters the negativity through his own consciousness and controls the group energy with his own extended energy field. This field acts as a protective shield so that the students’ auras, which carry the imprints of their negativity, cannot merge with each other, and their destinies cannot entwine. If the Mahan Tantric himself were not totally detached, the negativity released from such a group, would make him ill, if not kill him. The participants’ auras must ultimately change to blue and gold, representing devotion and perfection. White Tantric Yoga needs special circumstances. It has a special teacher and yields special results.”

I said to Yogi Bhajan that “back in the eighty’s you discontinued leading the Tantric courses yourself and began to use a video and facilitator. Do you foresee this as the way it will be now, or will there be another Mahan Tantric such as yourself?” He said that “we don’t know. This is something you don’t know.” I asked if people are still getting the same cleansing effect. He said, “That it’s better now. Everything is psyche and electromagnetic field. There’s nothing new.”

“If the psycho-magnetic field of the male can be merged with the psycho-magnetic field of the woman, it will achieve a balance, and if, which this super psychic power, it can be conducted in the soul, then the individual couple shall live together safely for the rest of their lives; they shall not fall apart. Now these are the basic grounds on which White Tantric Yoga is based. There are disturbed feelings; some have hang-ups because of the neighbors, some have this, and some that. There are so many ways in which a person can get messed up. So when they meet in life, they are a bunch of hang-ups; neither she’s clear, nor he’s clear. They get married. For a few years the relationship goes alright because of the sex life and understanding, but then they start quarreling. Fights ensue. Dislike and hatred come out of doubt, doubt comes only when there is a low energy.  White Tantric Yoga raises the energy. It gives you a gain in space. It lifts you up and gives you a higher light.”