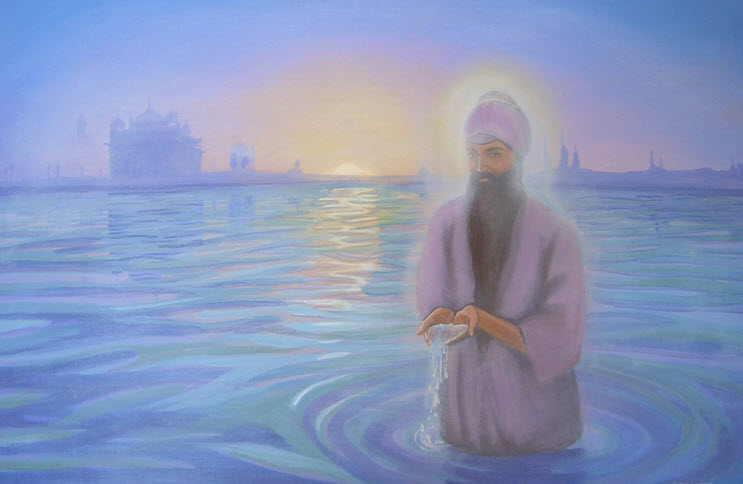 This is an excerpt from the book Heroes, Saints and Yogis: Tales of Self Discovery and the Path of Sikh Dharma, compiled by Shakti Parwha Kaur Khalsa and Guruka Singh Khalsa.

In 1938, when he was nine years old, Harbhajan Singh Puri (who grew up to be  Yogi Bhajan ) was seriously ill with a severe ear infection. Neither his father, Kartar Singh Puri, who was a physician, nor any other doctor and healer that had been consulted, could find a cure. The infection was spreading, and if it reached his brain, he would die.

While he slept, the boy had a visitor—you can call it a dream or a vision, if you wish.  Guru Ram Das  came to young Harbhajan Singh and told him that he should ask his father to put a little onion juice in his infected ear.

The boy told his father, who was willing to try, and sure enough, the treatment worked.

From that time on, Harbhajan Singh considered Guru Ram Das as his special protector, teacher, and guide. 3HO ashrams around the world are named in honor of Guru Ram Das, the Fourth Sikh Guru, the great healer and servant of mankind.

Guru Ram Das was a “Raj Yogi” (Royal Yogi). He designed Harimandir Sahib (Temple of God), the famous Golden Temple in Amritsar, India. Sikhs all over the world consider it the holiest of holy places. Open to people of all religions, colors, and nationalities, tens of thousands of people visit this sacred shrine daily to be inspired and uplifted by the sound current created by the continuous recitation of the  Siri Guru Granth Sahib , the Shabd Guru, and to sip and dip in the healing waters surrounding the Temple.

Every night for four years, during the time he worked for the Indian Government as a customs officer, after his duties were done, Yogi Bhajan went and washed the floors of the Golden Temple. During those hours he prayed to cleanse and purify himself, and even to lose—or at least not misuse—the yogic powers he had gained.

He prayed to Guru Ram Das. He went into the Golden Temple as a yogi and came out a saint. Such is the power and majesty of Guru Ram Das.

Very soon after his move to the United States, Yogi Bhajan became enormously popular. His Kundalini Yoga classes were filled to capacity. He captured the hearts and touched the souls of students who felt from him the universal love that only an enlightened master can share.

Many students wanted to go with him when he attended Gurdwara on Sundays. When he went back to India for a visit in 1972, eighty-four yoga students went along with him.

Unfortunately, his huge success in the United States stirred up jealousy and envy among some so-called spiritual people in India, and they betrayed his trust in them.

[Shakti Parwha] personally wired to India the money that had been collected to build proper accommodations, showers, toilets, and mattresses. Yogi Bhajan’s “hosts” simply took the money without making any arrangements. When the travelers arrived, they found that not even a cot had been prepared for their visit.

Yogi Bhajan had to sleep on the cold hard cement floor. Knowing the group could not stay there without decent housing, he gathered up all the students, and they left for Amritsar. Threatened and harassed, he meditated and prayed, calling on Guru Ram Das for help.

Guru Ram Das appeared before him again and this time gave him a special mantra to chant for protection whenever he—or anyone—was in danger:

When we call upon Guru Ram Das, we are not calling on a person. We are invoking the enlightened consciousness that this great being embodied, and bringing to ourselves his special divine qualities. Ram is one of the names of God, and Das means servant. Guru Ram Das was indeed, a beloved servant of God.

In the book  Heroes, Saints and Yogis: Tales of Self Discovery and the Path of Sikh Dharma, compiled by Shakti Parwha Kaur Khalsa and Guruka Singh Khalsa:

What does it mean to live as a Sikh? How is this lifestyle relevant today? In this reader friendly collection of personal stories you will find “People Like You and Me” candidly sharing their experiences of self-discovery along the path of Sikh Dharma. This one-of-a-kind book includes fascinating tales of the unique lives of the ten men of higher consciousness who forged a path of everyday learning and personal excellence.

Visit the SDI Marketplace  if you are interested in purchasing this book.