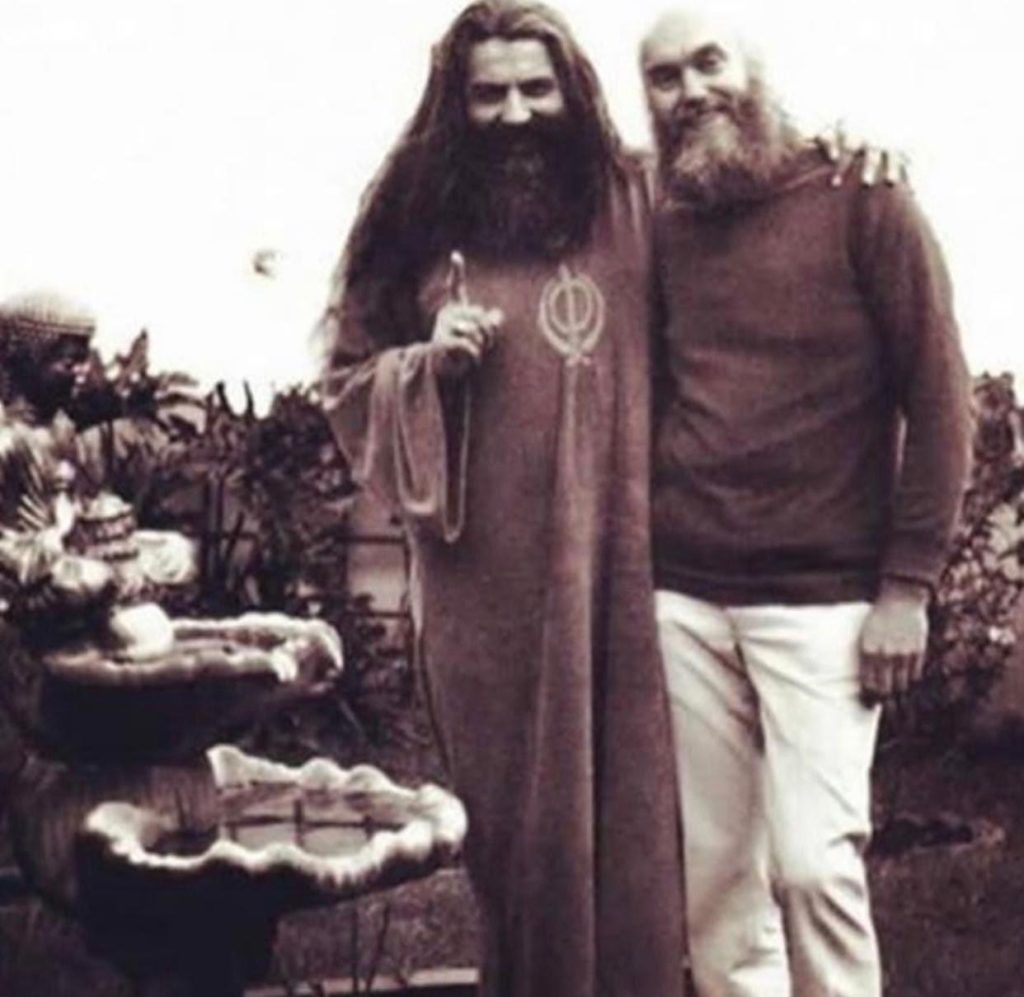 THE YOGI BHAJAN SAGA and Baba Ram Das (Richard Alpert. LSD. “Be Here Now”). Baba Ram Das told this story about Yogi Bhajan to a crowd in Toronto on a speaking tour in the early 70’s. He was speaking and 3 of Yogi Bhajans students were harassing him about his eclectic path.
“Why don’t you just pick one and stick with it. You aren’t helping anyone by jumping around. Pick one”. It was all ego based.

Ram Das outshouted them and said “WAIT a minute! I have a story about meeting your teacher. Do you want to hear it?” The Bhajanites had to shut up.

Ram Das had been in L. A. at a health food store and one of Yogi Bhajans secretaries approached him and handed him a note written by Yogi Bhajan that said “Come see me immediately”. Babaji gasped. He said that everywhere he goes he is treated with respect except for Yogi Bhajans students. “I figured that if his students were all assholes that this Yogi must be the Asshole of assholes”. Big laugh. So he milled around hoping the secretary would leave and he could get out of meeting Yogi Bhajan. Minutes later another one came up with a note written by Yogi Bhajan that said “I said Come see me immediately!”

“My Guru (Neem Karoli Baba) told me that I had to serve any teacher who had a sadhana so I had no choice. He was known for his vigorous sadhana”. So he spent the next 20 minutes in the fruit section slapping all the melons looking for the best melon in the store. THE melon. “It is tradition to always bring a teacher a gift so I figured if he was as much of an asshole as I was expecting that maybe he could work out all of his frustrations on the melon”. The crowd burst out laughing.

Melon in hand he went to the ashram quite worried and knocked on the door. A woman opened the door yelled behind herself “ ‘Sir … Baba Ram Das is here’ and then she tackled me” and 4 women jumped him. One on each foot massaging them. One on his back and one massaging his scalp.” They worked him over “with the best massage I have ever had. Then they stood me up and walked me to the back yard where Yogiji was cooking veggie burgers”. Baba Ram Das and Yogiji talked and laughed for quite awhile. “It was a spiritual orgy. I have never had so much fun”. So after he relaxed about the Demon Yogi Bhajan he got up his nerve and asked if he could ask an honest question. YB “OF COURSE!”.

He related his experiences with Yogiji’s students and said “I am an author with a Guru. I am not at your level. You are the real thing. I know that. But because of your students I was expecting you to be a pain in the butt. I was afraid to come here. Can you tell me why your students treat me so poorly? They are the only ones that do.”

Yogi Bhajan nodded and responded that in his last life he was a perfect master but had enough ego to deny some students his teachings because they were “undeserving”. “Because my ego got in my way my karma was to come back and get all of the undeserving people with a spiritual bent as my students”. (Ponder that for a moment) In short he said that he had inherited the bottom of the barrel of spirituality. For every action there is an equal reaction. When you mess up as a teacher the karma is magnified. Are you paying attention my Siblings of Destiny “teachers”? He said that there was nothing pretty about his job. He told Ram Das that “one day almost all of them will turn on me. The ones that deify me will be the ones who slander me the most.”

Ram Das was surprised that The Wizard of Oz had this karma and all of his confusion evaporated. Impressed with his honesty and hospitality he told him that he wasn’t saying anything outrageous and why did his students feel they needed to harass him. YB “It’s just a father phobia. You are having an impact and they aren’t. They all want to be the Big Shot. You are threatening to them. The love message is the hardest message to maintain. It makes people snore because they cannot maintain it. You maintain it. Just ignore them”. The crowd burst out laughing as the Bhajanites melted into their chairs.

After the laughter subsided Ram Das said “So if you have no more questions, I would like to continue with my talk”. (Pause) Thunderous laughter, and then Baba Ram Das continued with his love message with 3 very quiet Sikhs behaving themselves.

3HO is a father phobic 12 step group with pretty clothes … and some of them do yoga! Don’t judge Yogi Bhajan by what his undeserving students say. His undeserving students could fuck up the sunrise. They don’t now him from a rock to a tree to China. Judge him by your experiences of the yoga. Do a lot of yoga. We are in lock down. Do 4 hours a day. Do it until your aura is stronger than your sub conscious so you can feel what is really going on here.

So … “do you have any more questions” about Yogi Bhajans students “or may I continue with” my bowl of Joe’s Oats?

Bottom of the barrel. One shade shy of a curse. “Undeserving” with an enormous sense of entitlement.

Ram Das came to summer solstice in 1982 as the Honored guest speaker. He told us all stories about how much he use to trash 3HO. “All in white and uptight”. “3HO is the spiritual mafia. They have family in every town”. We all had a great laugh that ended with a standing ovation when he said “I like your Guru. I guess we have all grown up a bit”. (HE did!) What a wonderful man. My first teacher.

In my 45 years in “3HO” I have met maybe 2 people who knew him “from a rock to a tree to China”. That is what he told me. “Don’t listen to my students. They don’t know me from a rock, to a tree, to China. If you have any questions ask me directly”. His students saw him thru the lens of their father phobias while they tried to turn him into the father they never had … and that was NOT HIS FUCKING JOB! He was a teacher. The worst/best kind of teacher. If you were weak he put on the kind father hat. If you had a 9′ thick concrete ego (Moi!) he put on the Saturn teacher Drill Sargent hat and ripped you a new asshole. Humiliation. Degradation. Demeaning insults. Whatever it took. Shakespeare called it “Cruel to be kind”. And then there was every hat in between those polarities. It was so easy to mis read this teacher. Especially if your father was a dick, you were never loved and were looking for that new dad. (Moi!)