Home › Experiences › Our Stories › Yogi Bhajan, The Quintessence of Obedience 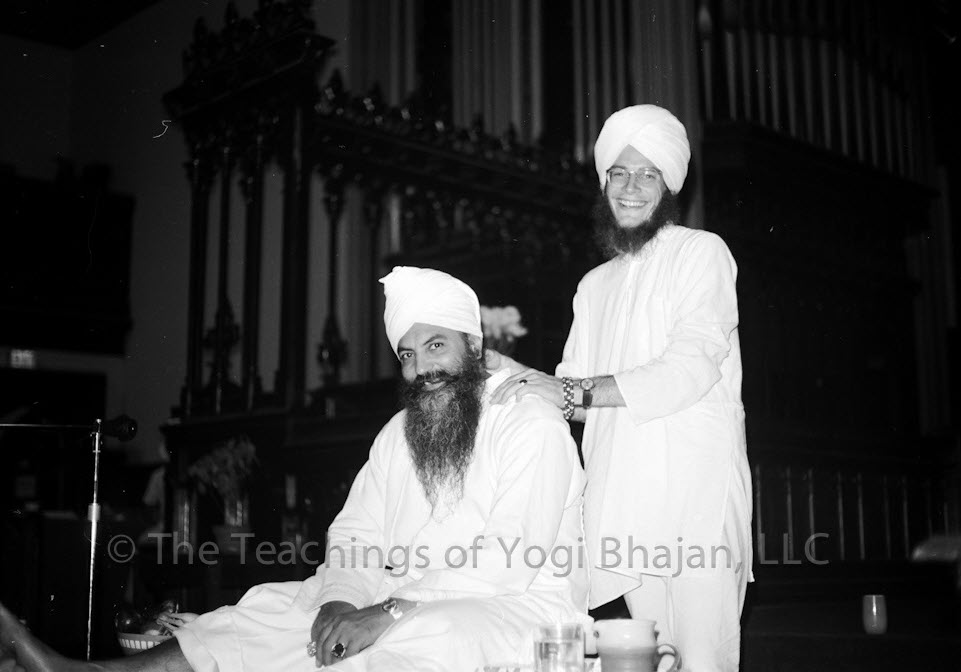 As shared on the Hacienda de Guru Ram Das website some years ago.

“Son,” the Siri Singh Sahib, Yogi Bhajan, said, “The guidelines of spirituality may vary depending upon many things, but one of the most important factors is obedience. It’s also one of the hardest concepts to surrender to.”

We were driving from the ranch to the El Dorado Hotel in Santa Fe on a summer evening in 1994. We spent many evenings eating and listening to live music at this venue. As usual, our teacher invited many people to join us. (Allow me to give credit today to some unsung heroes: for years, Dharma Singh and Siri Mukta Singh foot the bill for these outings, with no thought of reward.) The Siri Singh Sahib Ji found these times relaxing, entertaining, and a teaching stage. The El Dorado met all his requirements, so it became our usual hangout for many years. In fact, it was so well known that occasionally some people would come looking for us there. It was his nightly courtly gathering. Like everything good, It was never appreciated enough at the time.

Time spent in the car was one of the times where I could, once again, speak privately with our beloved teacher. What about the resident secretary on duty? Why do you say private? Because, after many years of experience, I can say that, unless called upon, the resident secretary on duty was there only to serve him, not to impose her personality. Also in his world, confidentiality was a silent, solemn oath and guarded religiously. My history reflects many intimate conversations I’ve had with our teacher within this environment. After all, if it weren’t kosher, he would have shut it down. No problem,

His above statement was in response to a question I had presented to him, “Sir, Isn’t obedience in the eye of the beholder?”

“What I’m asking is, isn’t obedience subjective? How do you know that your being obedient to the right standard? How do you really know how well you’re doing?”

“Then, use Him. He wants you to. Listen, I know His standards are subject to abuse, but so what! What isn’t? So long as the teachings remain pure, the purity of the Guru will continue to be available to all. I can’t help what others do. That’s their karma. I teach, I pray, I hope, I do whatever is necessary to help, but the rest is up to each individual. Use the Guru, His teachings, His mantra, to set your obedience in the right direction and everything will come out great.”

Back then, I understood intellectually, but his words hadn’t really sunk deeply into me. Don’t get me wrong, I truly admired his words, it’s just that, at the time, it was too much to deal with. It was another “catch you later” moment. So, I stopped asking any more questions and changed the subject. I started talking about building this dharma, he always liked talking about that.

I didn’t say a word in response. His words were finally penetrating my shell. I understood what he was saying. Very few are even aware of what obedience is in it’s true sense and are therefore afraid of it. It’s actually the most beautiful of disciplines if prejudice is put aside and karma allows for obedience to a true path.

“A healthy fear of not doing enough, and a healthy love in doing more than enough come together to create a Guru Sikh, a Gurumukh, a beloved in Guru’s court, a true man of God.” He said this easily because this is who he was. He understood obedience.

As a sidebar, I’ll tell you what he also understood, mischief, that’s what. He understood it so well that it made him truly compassionate to others who were being mischievous. That doesn’t mean that he didn’t deal with it appropriately, he did. What it means is that his default function was compassion. How lucky are we? All is forgiven. We can start anew, always.

Obedience makes miracles. Obedience creates gratitude. Gratitude foretells devotion. Devotion blends into love. And, love melts into merger. Merger with the Guru, the Infinite, the God of Everything, the self-illuminated self. Stay tuned,

Home › Experiences › Our Stories › Yogi Bhajan, The Quintessence of Obedience