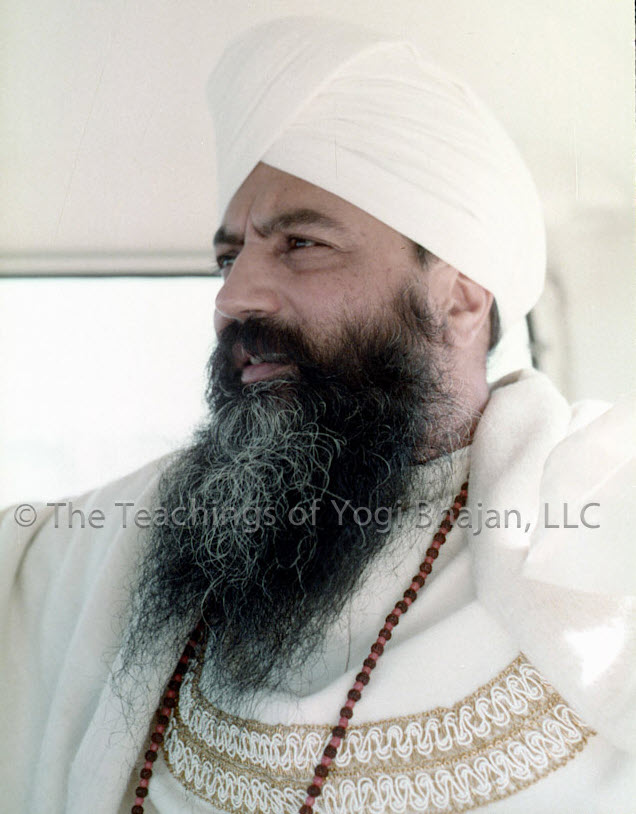 This was shared years ago to the Hacienda de Guru Ram Das community by Hari Jiwan Singh of Espanola, NM.

“Oh sir, I’ve seen you change so much,” I blurted out one afternoon in the May of 1993. Thank God we were alone. I immediately realized that it probably wasn’t my place to speak to my teacher this way. I was shocked. He just gracefully turned his head, gave an ever so slight nod, and that was that. Well, not quite! Please let me explain.

We were driving into Santa Fe for our evening repast at the El Dorado Hotel. If he wasn’t cat napping, we were usually discussing something or other. On this occasion, we were discussing change. Specifically, the time it takes for individuals to change. It’s an interesting topic, especially from our beloved teacher, Yogi Bhajan, the Siri Singh Sahib’s perspective. His perspective was always unique.

I don’t remember the exact discussion, But what I do remember is what’s important. Whatever the discussion was about prompted me to make this statement directly to my teacher. Right then, that’s grounds for expulsion. Who am I, a student, to challenge in any manner the perfect form which was our teacher. Anything less, and I infer that he wasn’t what he professed. That can be very rude even though that’s not how I intended it to be. Thank God we have a most compassionate teacher.

I vividly remember thinking, ‘What did I just do? I pray he reacts knowing that I meant no disrespect.” His answer was almost immediate. Not only was I not rejected, not only was he not going to get even with me for my ignorance by delaying a response, his response was so quick I had no chance to feel anyway but good about what I’d said. I always loved his compassion. Yes, he could get upset with me and I’d know it, but he never abandoned me. No matter what! I counted on it and he was totally reliable. He was what he taught.

At this point, I felt emboldened. I proceeded further, but this time I carried a filter. I thought before I spoke. That way I wouldn’t take the chance of saying something disrespectful, and, still, hear through his intimacy what he thought. These were rare and beautiful times. Believe me, I took full advantage. Truth be told, I believe that’s the way he wanted it. Occasionally, he took advantage of situations like this as well to say what he otherwise wouldn’t say.

“You’ve occasionally told me some explicit examples of your actions in India which didn’t paint a pretty picture. I can imagine the difference between you now and then. That’s why I said what I did. I meant it as a compliment.”

“I know son. That’s why some Indians see me differently than Americans. They remember who I was and can’t believe that I could become who I am. On the other hand, Americans see me without prejudice. They see who I’ve become, not who I was unencumbered by history.”

Being cute, as I often thought I was, I chuckled and said, “Well, thank God I caught you at a good time.”

“No, anytime’s a good time, only time is easier now.” That statement took a while to focus on as well.

“Is that why you say, ‘It’s much, much easier to become spiritual from the worst of places than it is from comfort?’

“Did I say that. It’s not easy. it takes courage, guts, grit, gratitude, trust and love. What I said to Guru Ram Das may not have appeared to be said in reverence, but it was. I talk to Him my way and he understands that I mean only devotion through it. I’ve been blessed because of my love my way. It’s the deepest way I know how, so I love him my way. And, the good news is that Guru has accepted my love. That’s the key right there. Love, in whatever form, has to be reciprocated by God. Otherwise, God’s blessing will be missed.”

What could I say after that. I just drove ahead with thoughts swirling through my consciousness. Where to begin; where to remember; where to practice? Where to remember these divine words when they are most appropriate. Where, where, where! Enough with the where already. Trust that Guru Ram Das will come through when you need Him is the antidote for the removal of all ‘wheres,’ and, how the blessing of effective effortless change takes place. I remember thinking, ‘Just trust in Guru Ram Das and don’t let any doubt get in the way. I’ve continued to practice since. It works. Stay tuned,