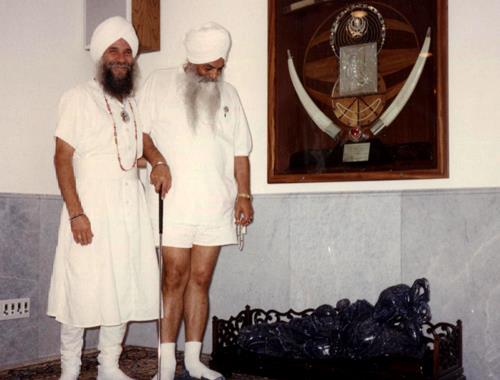 I’ve had three great teachers in my life: my birth father, the Siri Singh Sahib, and Guru Ram Das. Many times the lessons they all taught me were the same. Let me give you an example.

There is a tradition, a teaching, in Judaism which is to be followed when a parent passes away. It’s called saying Kadish, a prayer for a loved one. When my grandfather passed away, my father followed the teachings and attended shul (temple) early every morning to pay homage to this teaching. This procedure lasts for eleven months. It’s quite a commitment. Close to when my father’s duty was to expire I said to him, “I’m sure you’ll be glad when this duty is done, I know how it has interfered with the discipline of your personal routine”. “It’s funny.” he responded. “At first it was a problem. I had to rearrange my whole schedule. After a while my duty became my routine. Then, about a month ago, I really started to enjoy the experience. I’m going to miss being with the congregation every morning. I really enjoy sharing the experience with all the new friends I’ve made. Going there makes me feel much better about myself.” Well, that’s not the answer I expected, but it’s stayed with me for over half a century.

“Know you’re covered. Know that life flows. Know that you’re content. Know that you’re carried because you’re doing what Guru Ram Das says is necessary to receive his blessings.” It was a warm September night in Granada, Spain in 1989. We were staying at a government run small hotel. There were many of these hotels that were projected to be of great quality. They were located all over the country especially in heavy tourist areas. They were right. My room had famous Spanish lace everywhere, beautifully hand carved furniture, local marble floors and bathroom sink, etc. I never let my gender get in the way of my appreciation of graceful things and my room qualified. The hotel was a very pleasant surprise
.
We were on our way to Barcelona in the northern part of the country where the Siri Singh Sahib was to teach a meditation class. Granada is in the far southern part of Spain. It’s two different worlds. Granada still has a lot of Moorish influence. The great palace, Alhambra, is one of the examples of the highest art of its time. Granada was definitely worth the unusual side journey the Master took us on. The few days we spent there were very special. I will still remember them.

We went from the lovely Inn to the great Alhambra. The energy of the Moor Empire was still present. The Emirs of this empire had left a legacy with the creation of this great palace. They couldn’t take it with them so here it was for us all to enjoy. The Master bathed in the magnificent energy of this royal architectural residence.

From Alhambra we went to eat. From dinner we went to a flamenco dance. The flamenco club looked like it was made for tourists, and it probably was, but the dancers were authentic. They stomped and strutted around and that included the woman as well. As a matter of fact, that’s one of the reasons we went. He appreciated the power of the women in this culture. The women of this culture are strong. Our Master appreciated this nature.

While we were eating, the Master continued what he was saying, “The way to do what Guru Ram Das wants is simple: hang out with Guru’s Sangat. No matter how bad you think you are, just keep hanging out with Guru’s Sangat. And, where do you find Guru’s Sangat? Hum.” He loved asking questions like this. “Those who do Sadhana,” I quickly answered. “No,” he said with a cute smug tone. Someone else in our group answered, “Guru’s Sangat can be found in your heart.” That’s nice, but it’s not the correct answer.” Now, he was going to give us his answer, “Guru’s Sangat is found in the Gurdwara. Relate to the Gurdwara. Serve the Gurdwara. Mix with the people who join you in the Gurdwara. See what happens to your life. It’s beyond your belief. And that’s the blessing; you are propelled beyond your wildest dreams.” See, I told you Granada was memorable.

Recently, I heard a Hukam by Guru Ram Das where he longs for the Lord. “I have been re-united with my Creator Lord. I was separated for such a long time. I am a sinner…; my intellect is useless; I am worthless; I am filthy and polluted. My demerits are numerous. I have sinned so many times over and over.” He goes on, but you get the idea. He has been saved in spite of himself. He Guru ji goes on to tell us how his blessing of merger came about, “I was rolling around in the dirt and no one cared for me at all. In the company of the Guru, the true Guru, the Guru Sangat, I, the worm, have been raised up and exalted, blessed. All my sorrows and troubles have come to an end.” (Siri Guru Granth Sahib: || 4 || 5 || 11 || 49 || Page 167)

Hmmm, sounds a lot like what the Master said in Granada and my father said in St. Louis – hang out with the congregation of temple. Now I get it. The master was teaching the Guru’s way in a way we could hear it – in Western language. The more I see this, the more I see that the Master and the Guru were one. By that I mean that he had been blessed by the Guru and he knew the secret to this great advantage. All my teachers, my birth father, the Master, and the Guru say the same thing: be with Guru’s Sangat. This will work for you when you don’t or can’t work for yourself.

The next day was spent uneventfully. I sort of remember it, but it’s not worth searching my brain about. Then off to Barcelona as if nothing happened, as if it were just a surreal adventure. But, it wasn’t. It has stayed with me all these years. This journey taught me that what I thought about anything wouldn’t be held against me if I hang out with the Guru’s Sangat. At some point, and I can’t be the judge of how long it takes, at some point the association with the Guru’s Sangat, this pivotal relationship, will change your life no matter what baggage you come with. I’ve experienced this and verify the Teachings as true. Life seems easier when there’s truthful harmony with all your teachers – no change is necessary, just obedience. My advice, hang out with Guru’s Sangat.