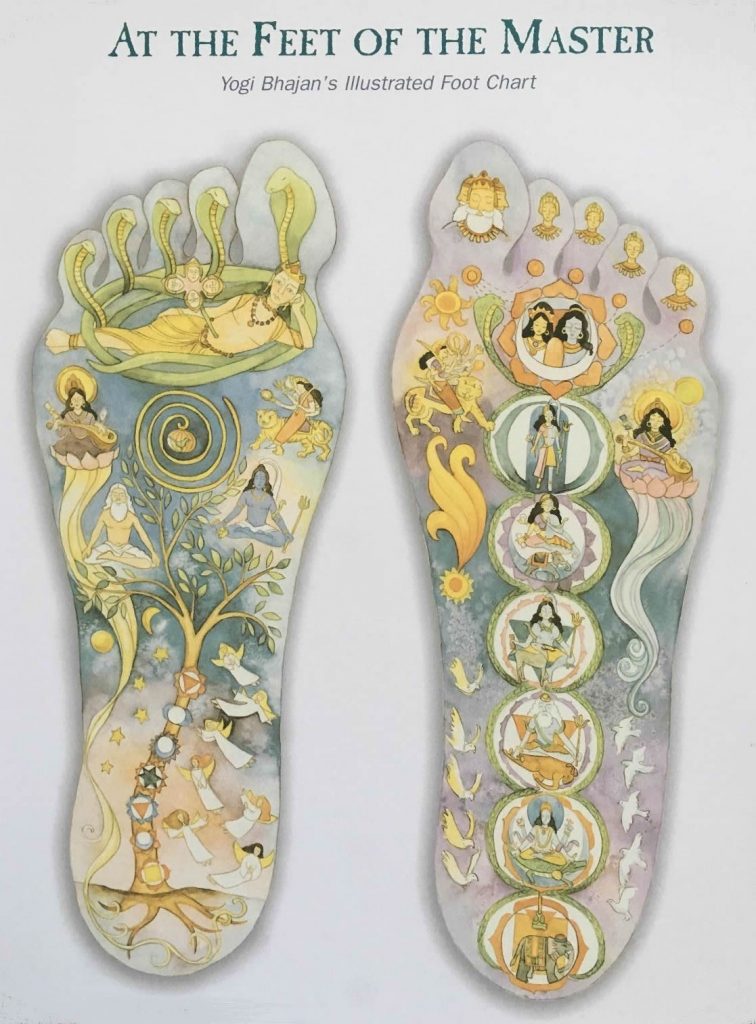 Here Nam Kaur shares how this foot chart came to be:

“When I was working on the Aquarian Teacher Training Textbook with the Siri Singh Sahib, we would meet regularly. I would bring questions for him to clarify so we could be sure to get the teachings recorded accurately. One day he drew a simple line drawing of a foot with deities and a tree of life and explained the meaning behind it all. I asked Hari Jiwan Kaur to create a watercolor illustration of his design and we had it printed on tee shirts to sell as an IKYTA fundraiser that summer – it was very popular!

Here is an excerpt from a meditation course lecture by Yogi Bhajan on June 16, 1998, at the Summer Solstice Celebration at Ram Das Puri in New Mexico, where he describes what is depicted in this foot chart image.  (Scroll down and you can watch a video of the same).

We are making a chart to talk about your anatomy and how the working of your pranic energy goes through a footprint. You should be educated about how much mankind knew about themselves three thousand years ago, and how far behind we are in the science today.

The deities appear wherever there are controlling nerve centers in the foot. The serpents, encircling the deities, represent awakening from the past to a new living future.

On the big toe is the face of Lord Brahma, who represents rejuvenation, regenerative energy and knowledge. The faces on the other toes are his disciples.

The figure of Adi Shakti, which symbolizes protective energy, is shown sitting on a tiger, Durga.

The flaming sun under the Adi Shakti represents life.

Under the pinky, is the Goddess Saraswati, sitting with a musical instrument in hand on top of a long flowing waterfall. This symbolizes intuitive knowledge and prosperity (the Moon, expansion).

A line goes from each toe to one point under the big toe. This juncture represents the pituitary, the command center.

Under (the big toe is ) the pituitary point, (and under it) is the sun; extended life through breath of life.

The hawk below it symbolizes prevailing energy.

The Eighth Chakra: (Lord Brahma and his disciples) represents semi-Gods in action.

Seventh Chakra: Top of foot, union to union. Creative and compassionate, with reality of grace and royalty to be embraced. The male figure is Krishna.  The female figure is Radha.  The lotus represents purity.  The Lingam, creation.

Sixth Chakra: Elementary manifestation; elimination of duality; command center for grace.  The half male, half female figure is the actual construction of every human body.

Fourth Chakra: Compassion and domination, creative action, creative wisdom. The figure of (Shiva)*, with the Ganges flowing out of the top of his head, symbolizes the supreme meditative connection between Heavens and Earth. The deer stands for innocence.  The symbol of Trishula, death; the snake, fearlessness.

Second Chakra: Union of heavens and underworld. The figure with four arms represents the Heavens, Earth and Underworld, and is holding the symbol So Darshan Chakra, a hammer, a lotus for purity and a conch shell for vigor. The alligator is the king of the underworld.

First Chakra: The elephant stands for wisdom; the snake, the elimination center; the moon above Saraswati depicts expansion; the doves, peaceful co-existence; the hawks, courage.

Here is the lecture where Yogi Bhajan asked that the description of this foot chart be shared: