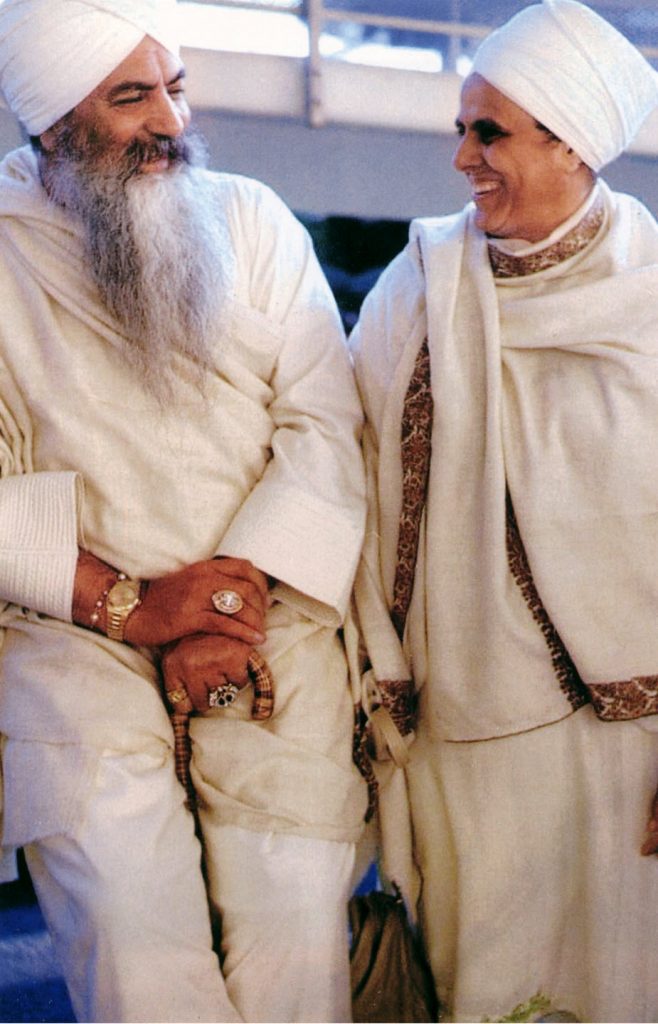 *This image and words are by Soorya Kaur (staff member of Yogi Bhajan) which she shared on page 42-43 of her book, YogiJi – The Light of Our Souls, written in 2005.

Yogiji is seen here in a private moment with his wife, affectionately known by everyone as Bibiji.  They were married for 52 years.  He always maintained that he turned to her for inspiration and looked up to her for her faith in the Siri Guru Granth Sahib. *

In the last 3 years of his life, too ill to do so himself, he trusted only her to recite to him the most precious thing of his life, Bani, his daily prayers, which she did faithfully by his bedside.

*the collected writings of the Sikh Gurus and other Saints and Sages, installed as the final Guru in 1704, by Guru Gobind Singh; held to be the living embodiment of the word of God.  In the Sikh belief, it is not merely seen as a holy book.

Yogiji came alone to America, but once he established his roots, he sent for his wife and children. He introduced to us, through ashram life, the concept of the extended family. “Those who sit together, eat together, laugh together, go through the thin and thick of it together: that is called family.” Whereas most western societies think of the individual as paramount, Asian, particularly the Indian cultures, lay a large emphasis on the family unit.

The Ashrams became our “joint families “. The consciousness of the whole group, that had a common goal, worked in unison. We worked with and supported each other. He taught us to “live for, not against each other”. Ashram life is not for the faint hearted; the early morning sadhanas (prayer, yoga, and meditation) were rigorous, and learning the concept of selflessness required a huge amount of commitment and dedication.

One the most alien concepts he brought to us was that of arranged marriages.  Our faith and trust in him was so total, that we allowed ourselves to be guided by him even in this most fundamental area of life.

Post marriage and the birth of children, when space started becoming a restraint, people began moving out of the Ashrams into their own homes. We then moved from the Ashram to create our own communities.