Home › History › 3HO History › Yogiji – The Light of Our Souls 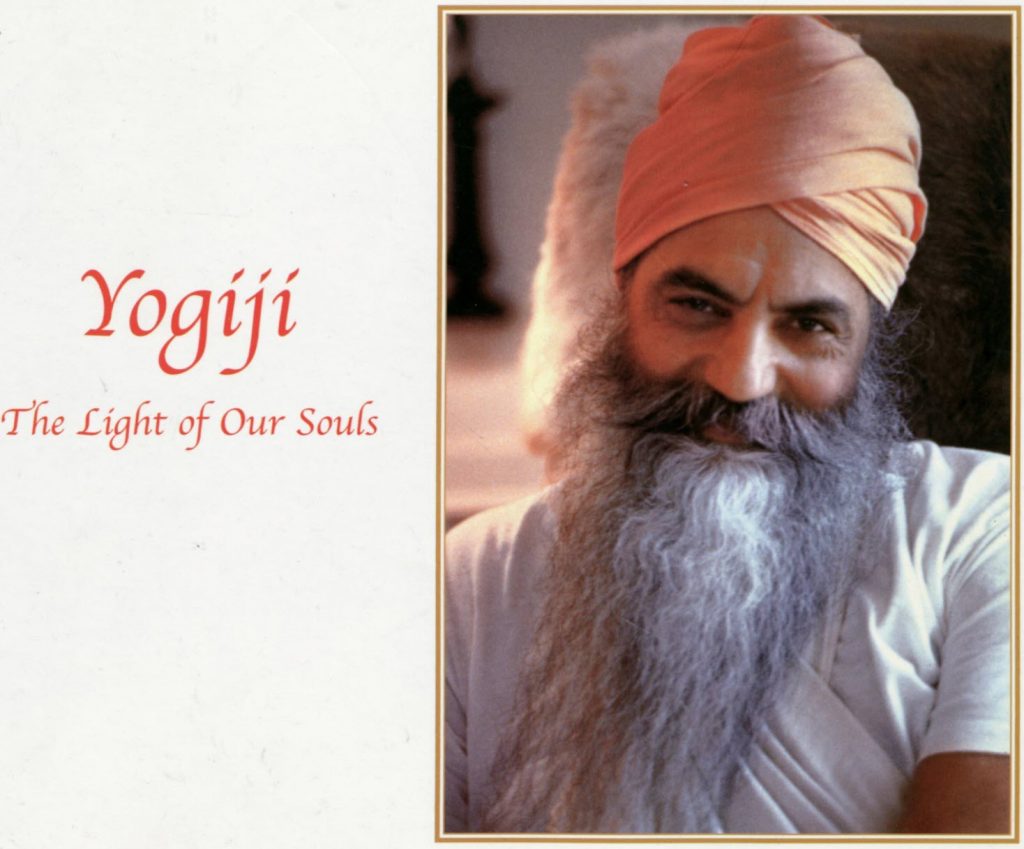 The book, YogiJi – The Light of Our Souls is a book written in 2005 by Soorya Kaur, staff member of Yogi Bhajan

This book is dedicated to Yogi Bhajan’s students and the children of future generations.  They will never meet him personally, but through this book may get a glimpse into his life, his humor, his loving personality, and his spirit, which was that of a saint and a soldier.

I wish to thank Yogijis immediate family, his wife Bibiji, daughter Kamaljit, and sons Ranbir and Kulbir for supporting me in compiling this book, and helping me to make it a reality.  While looking through my collection of photographs to find a suitable picture of Yogiji for a painting he was commissioned to do for the museum at the Golden Temple, Amritsar, the renowned artist Sewa Singh from Seattle saw the potential for a book.  I am grateful to him for his idea.  I would also like to thank my Italian friend Cecila, the follower of another spiritual teacher, who looked through my photographs of someone she had never met, with reverence.  She gave me the impetus to go forward with this project.  I thank my dear friends of over 35 years, Sat Jivan Kaur and Rona Elliot who seem to always know who I am, respect and support me through everything.  I wish to thank God for many, many blessings, but in particular, for my good friend Neesha Singh.  I could never have done this book without her editing and writing skills, and innate sense for photography.  We forged a partnership that made this book a reality in an extremely short period of time.

Thank you Yogiji, for letting me get in your way, anywhere, anytime to photograph you.  You have left me an invaluable legacy.   I will always remember with gratitude all the encouragement and freedom you gave me, the seemingly impossible project you entrusted me with, and your complete faith that I would get the job done.  You are the chisel, and I am your handiwork.  I know you still have much for me to do.  Even now I hear you say “Little, I am keeping you right here in my pocket.”

In February 1969, in Los Angeles, I first met “The Yogi”, a  name the Americans adopted for him while attending his Kundalini Yoga classes.  As I fell in love with him and his teachings, together with the other students, he became our spiritual guide and teacher, and became known as “Yogi Bhajan”.  Affectianately and respectfully, we learned to add the Indian expression of revereance, “ji” at the end of Yogi, and called him “Yogiji”.   Years later, after receiving blessings form the Akal Takhat (the Sikh’s highest authority), in Amritsar, India, as the leader of Sikh Dharma for the Western Hemisphere, his official title became, “Siri Singh Sahib Bhai Sahib Harbhajan Singh Khalsa Yogiji”.  He was then referred to as “The Siri Singh Sahib”.  When speaking to him directly, we often called him “Sir”.  In this book, we get an insight into his private moments, the human being behind the spiritual master… we will call him “Yogiji” throughout.

The first 3HO (Healthy, Happy, Holy Organization) headquarters was Guru Ram Das Ashram in Los Angeles, California, which will be known throughout the book as “The ashram, LA”.  The Summer Headquarters, and later our permanent International Headquarters, is officially called “Hacienda de Guru Ram Das Ashram”, Espanola, New Mexico, and will be referred to as “The Ranch”.

Where I have exact dates of photographs, they have been mentioned.

It is difficult to decide whether Guru Ram Das adopted Yogiji or Yogiji adopted Guru Ram Das.  Every morning as he performed Seva (selfless service) washing the floors of the Golden Temple in Amritsar, India, Yogiji heard Guru Ram Das’ Bani (prayers).  During this period, he was enlightened by a miraculous spiritually elevating experience, and his bond with Guru Ram Das was sealed forever.  Guru Ram Das became his and our patron Guru.  We were taught to call upon him to take our pain, to sort out our problems, to be there for us, to produce a miracle when needed, and he always delivered.

Not long after Yogiji’s death, I started an intense meditation that involved recitation of a Pauri from Gurbani (the works of the Guru) that took up to eight hours a day.   The culmination of this practice coincided with the ceremony when YogiJi’s ashes were immersed in the river at Kirat Pur, India.  Immediately after, I started work on this book.

This book about Siri Singh Sahib Bhai Sahib Harbhajan Singh Khalsa Yogiji, the Sikh spiritual leader of the Western Hemisphere’s life, is not in any chronological order.  It is a stream of consciousness account of the 35 years I spent with him in close proximity, first as a student, then as a pioneer starting his Ashrams (centers for spiritual growth), and later as a personal staff member.

Home › History › 3HO History › Yogiji – The Light of Our Souls