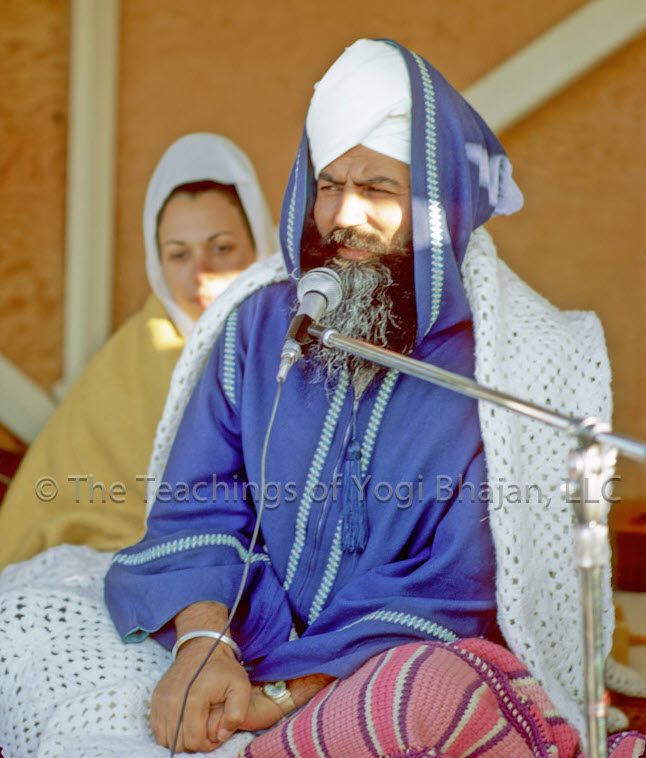 He said he didn’t read books, and yet the Siri Singh Sahib’s lectures are full of quotes from the classics.  One that he was especially fond of and often quoted, was, “Theirs is not to reason why, theirs is but to do and die.”*

Interpreting what a spiritual teacher quotes, does, remembers, or says, would usually not be a profile for a student of that teacher.  However, for me it has always been very much a part of my student-teacher relationship with the Siri Singh Sahib.  I not only enjoyed the student-teacher process myself, but also enjoyed watching how it played out between him and the countless numbers of people that he interacted with.

From early on, I always understood that all relationships he had, no matter what the other person thought, was the relationship of student and teacher.  Obviously, I saw it with his students, but I also saw it with waiters in restaurants, and shopkeepers, and even with his family.  I saw it with doctors and lawyers.  I saw it with politicians and those who he called friend.  There was always the gift of a lesson to be given.  Whether or not the receiver chose to understand, see, or experience was fascinating for me to observe as well

At the same time, I spent a lot of time wondering why he did many things.  I often didn’t understand the advice I was privileged to hear him give, or his schedule, or even his choice of movies and often what he ate.  Now as I watch those same lives and situations unfold, I often recall his words of wisdom and advice and am able to understand how his advice taken or not taken impacted lives.

There are of course, those events that concerned me personally.  Even if I didn’t understand how at the time, what I did always know, was that my growth as an individual was what his consideration was, even though I was often being forced to stretch way outside of my comfort zone and most often didn’t like it.

My comfort zone was definitely challenged in the early 70’s, when a course was scheduled for Hawaii.  Every staff member wanted to go, and he used the opportunity to have each of us face either our self-esteem, entitlement, acceptance of circumstances, or whatever going or not going might bring up for each.

I was very attached to going.  I had not been there with him before, but I had been there before I met him.  My memories of fragrant flowers, soft, sandy beaches with crystal clear water, and flavors of papayas, mangos and pineapples were very seductive.  After all Hawaii is called Paradise.

At that time, I traveled with the Siri Singh Sahib 75-80% of the time as his tour secretary.  But there was 20-25% of the time that I did not.  In the 70’s and much of the 80’s he did not have an entourage, but only one tour secretary from his staff who accompanied him.  His traveling to ashrams and visiting homes, gave students the opportunity to personally have the experience of serving a teacher.  It wasn’t until the last 10 years of his life that it was necessary to travel with many people who were required to take care of his needs.

When it was decided that I was going to accompany him on that Hawaii trip, I tried to appear neutral; I wanted to act like I was taking it in my stride, I didn’t want my pride to show, I didn’t want others to see it, or feel like I thought it was any big deal in case they felt bad that they weren’t going.  I was gloating inside though.  I knew that doing seva which means selfless service, does require the selfless part, and this Hawaii trip was already testing me!

The Hawaii Ashram was a big ranch style house set up on a mountain in Oahu.  It was surrounded by lush vegetation, birds of paradise and other tropical foliage as well as small pepper plants in the front yard, and mango trees.  We were there in mango season and in the morning ashram members would scout the neighborhood for the perfect mangos that had naturally ripened and we would sit with a box of them before us and eat them until we couldn’t.   Our first morning we were dressed in our bathing suits as we ate the mangos, bending forward over dishes and napkins to catch any juice that overflowed from our mouth and dripped down our chins. How perfect. And then we would go to the beach!

This day like most I experienced with the Siri Singh Sahib never went as I anticipated.  First it was mangos, and then breakfast.  Then it was talking with ashram members.  Then it was cooking lunch and using those small, small, hot, oh so hot, red chilies in a rice dish which made us sleepy after eating, so we took a short nap in whatever comfortable chair or couch we were sitting on in the open living room.  From our first good morning greetings to each other and throughout the day, the conversation about getting ready to go to the beach continued.

The sun started to move toward the West.  I finally surrendered in my mind to the fact that going to the beach probably would not happen that day. Actually, I was not surrendered at all.  I was annoyed that we had ‘wasted’ so much of the day.  After all we could have had all the conversations under a palm tree in the sun!  I wanted to get out of my bathing suit and into regular clothes and was about to do that, when he announced that we would leave in 5 minutes.

“Okay,” I thought, “this is Hawaii, the weather is beautiful, and if he is taking us to the beach at 4:00 PM it must be the exact perfect time to go.”

Once at the beach we never had a chance to get warmed by the sun before taking ourselves into the cool Pacific.  As crystal clear as it was, this water was floating around at a depth of over 11,000 meters in some places, in an expanse of over 5,000 miles.  It would take an awful lot of sunlight to heat that water!

I still have no logical explanation for that day, but I am sure that posture has had something to do with making my life better.  I say that not because of blind faith, but because I also observed over the years that when people did what he said and understood the consciousness that was attached to the action, their lives were improved in some way. And if they did what he said and didn’t understand, it worked, too.

In those hours or was it minutes in the cool Pacific, he created a situation which allowed my strengths to overcome the weaknesses that were forced out of me. That was what it was about; the whole nine yards, or 35 years.

For all of us, whether in his presence or through a letter he wrote, or listening to a lecture on tape, or doing a 40-day meditation, the goal was not to be shaken, or if we were shaken to learn to steady ourselves with the technology he taught us.  And he was always there to catch us.  He didn’t forewarn us, but the fact that we signed on as a student gave him permission to shake us as well as to catch us.  He prepared us for the day when we could be in balance, when he would no longer be here.

And so life with the Siri Singh Sahib was one lesson after another for 35 years.  Some of the lessons were understood at the time, some were understood later, some never understood.  One thing for certain, I am a better person than I ever could have been without those times which forced the introspection, the look at the anger, fear, or depression that bubbled into my psyche from time to time.

And I suppose that was the point of it.  Becoming the best I could be.  And how could I have ever known what that might have looked like if the master button pusher wasn’t there to show me.  Am I best I can be now?  Sure, because that is how I am.  So did I do or die, without asking the reason?   Not always, but I guess enough of the time.

And by the way, the next day we didn’t go to the beach at all, but were beachside in shops that had every stereotypical Hawaii keepsake available.  He didn’t buy anything. The day we finally went to the beach, I was having self esteem issues about my body, because of all the rice and mangos that we had been eating.  But that lesson is another story.

*from Tennyson’s Charge of the Light Brigade.