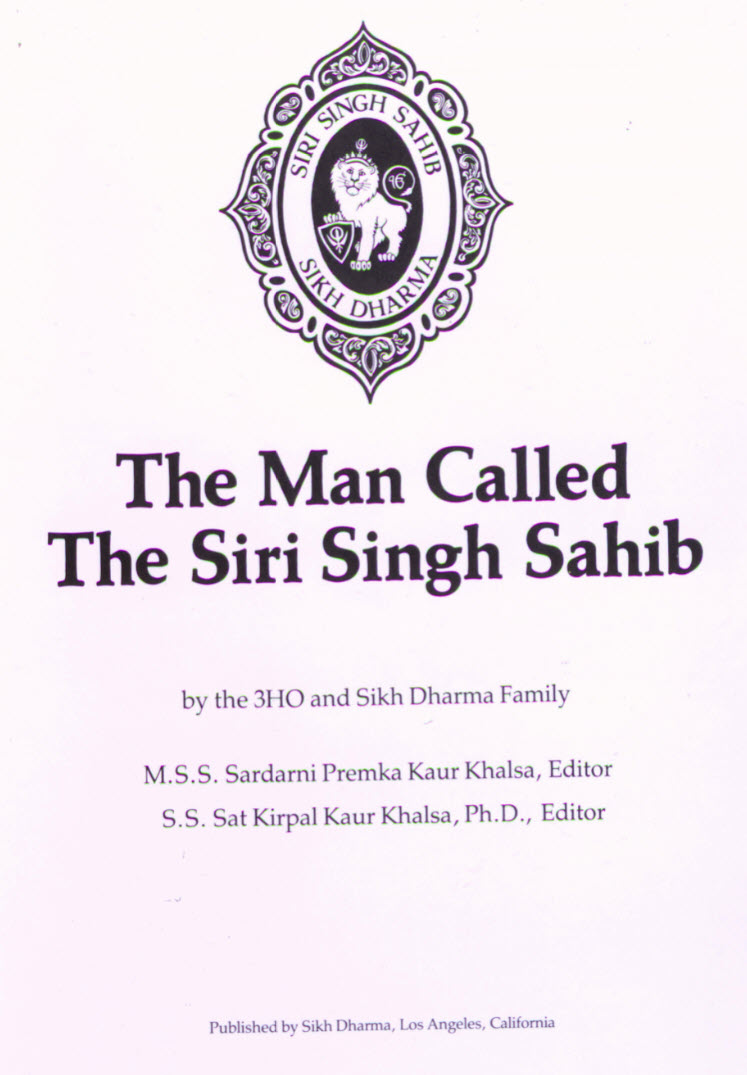 By the Grace of God alone, this Commemorative Volume has materialized, for by His Grace alone the man who has come to be known as the Siri Singh Sahib came to the Western World to inspire a generation of seekers.  Through their longing for the Truth, those seekers have marked out a path, it is largely thanks to their pioneering efforts that this historical volume has evolved.

Perhaps the first acknowledgement should go to our children and to our children’s children, whose very existence makes us realize that we are, indeed, making history.  Because of them, we have seen the need to prepare this volume, so that they might have an accurate record of that history.

Specifically, we would like to thank S. Dr. Gobind Singh Mansukhani, author and Sikh historian, who advised us of the appropriateness of preparing a Commemorative Volume in honor of the Siri Singh Sahib’s fiftieth birthday.  That suggestion was given approximately three years ago in the presence of M.S.S. Shakti Parwha Kaur Khalsa who in turn brought the idea before the body of the Khalsa Council.

The Khalsa Council took on the project, assigning its implementation to a Commemorative Volume Committee, with S.S. Sat Kirpal Kaur Khalsa assigned to act as its chairwoman.

We would like to acknowledge the entire staff of the Secretariat for making the time and space possible through shouldering additional work, the volunteer workers, who came in to fill the gaps in people power, all of the typists and proofreaders and finally the graphic artists and designers who offered their expertise along the way.  Much appreciation is due to the members of the Guru Ram Das Ashram in Eugene, who were called upon in many ways, and who came through with a smiling attitude of gratitude in performing this most blessed seva.

Finally, the guiding hand of Guru was again apparent as we sought out the pointer and typesetter for this highly specialized project and came upon a book publisher who was a disciple of His Divine Grace, Swami A.C. Bhaktivedanta in Los Angeles.  His enthusiasm and devotion to this project has been a constant source of reassurance along the way, and it seemed most fitting that the actual production of this volume would have a interreligious participation.

Next, we settled on the typesetting company, which happened to be comprised of a group of devout Christians, who added their spirit into the project.

We add to this, our appreciation for all of the loving letters of encouragement and inspired greetings and messages from spiritual and community leaders throughout the world.

Finally, our thanks to all of the members of this great 3HO and Sikh Dharma community who have taken part through their poems, their articles, their letters of messages of love and appreciation.

Dedicated to the future generations, who will long to know their history. A history which was predestined by God and Guru to take root in the West and to be nurtured by this one beloved son of Guru Ram Das, a man who has come to be known as the Siri Singh Sahib.