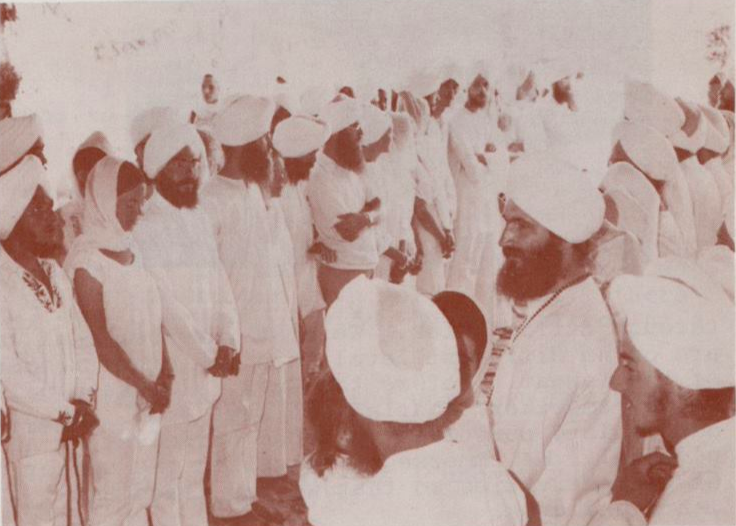 Old and new Sikh ministers stand together to take the vows again and be ordained as Ministers of Divinity for the Sikh Dharma Brotherhood in the Western Hemisphere at Summer Solstice, 1973.

Step 2 of the 7 Steps of Happiness – Character

At the Feet of the Saints

Why does the practice of Kundalini yoga give us character?

What are the vital principles for which practicing meditation, physical exercises and joining the Sangat, can change our behaviors, our virtues, our way of being, bringing peace, prosperity and above all resolution to the heaviness of negative emotions?

By practicing and meeting other practitioners, this will allow us to enter a virtuous circle of relationships and evolutionary energy.

But what is character?

A line of Sikh Dharma ministers had formed around YogiJi as he gave us instructions on the nature of our duties.

He then instructed us to go and touch the feet of the Sangat with respect and reverence.

Ram Das Singh, who told this story, said he placed his hands upon the feet of the first person he approached and bowed his head in reverence to the Divine within him.  Upon doing so, he felt complete bliss.

An eternity of joy and an infinite amount of gratitude filled his being. With each saint he approached and then bowed and touched their feet, that same tranquil ecstasy manifested itself in his consciousness.

He said that bowing his head and putting his hands on the feet of each person who attended the event was a gesture of infinite joy. Each student became a saint before whom to bow, each bow an extraordinary opportunity to recognize a soul in its earthly expression.

“For the first time in my life I felt I could appreciate the meaning of the word humility.”

These are the gestures that Yogi Bhajan invited us to perform, telling us how Guru Ram Das took care of washing the feet of travelers who came to his house after long pilgrimages.  He served them food and looked after their well-being by recognizing their divinity.

How much of this is alive within you?

The time has come to show character and experience the joy of practice.

Together from all over the world:  a unique Sangat from different cultures will join together to rediscover and celebrate our heritage of character created from the courage to recognize one’s soul and the humility to serve it.

We are waiting for you.  Join us!