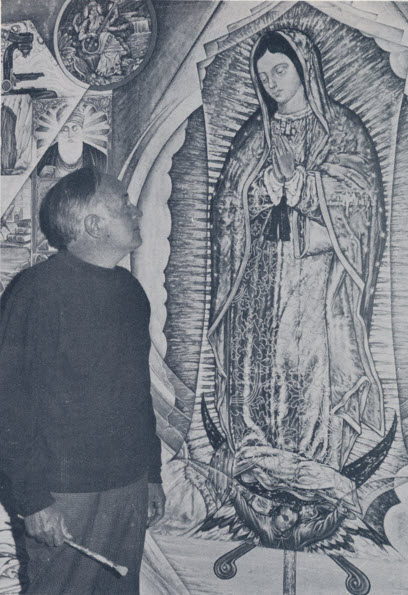 Ed O’Brien and the Lady of Guadalupe

Written by Wha Guru Singh Khalsa and Ramanand Singh as it appeared in the Fall 1975 Beads of Truth Magazine:

Ed O’Brien, the artist of the Sikh Dharma who has prophesied the history of man through his mural, located in Espanola, New Mexico.

“The Christians have Michelangelo and the Sistine Chapel, and the Sikhs have Mr. O’Brien and the Mural in Espanola. No human being painted this mural. This man was able to do what I could never do – he accurately told the history of this world, and perfectly predicted the events of man up to 5,000 years into the future. I could never make such a prediction, for man would not allow me to do such a thing, but O’Brien quietly told the future of the whole world and then humbly left this planet. O’Brien will be known in the history of man from this time forth and books will be written on his works and pilgrimages will be made to see his murals and the power of his faith captured in paint. I am petitioning to have this O’Brien made the first Christian Saint in the Sikh Dharma.”  ~Siri Singh Sahib Harbhajan Singh Yogiji

We can still remember Mr. O’Brien when we first met him, living in an old Spanish adobe on upper Canyon Road in the old part or Santa Fe.  It was during the middle of the winter of ’72 and ’73 when we made more trips than we can remember to that little house on the hill where we sat for hours and hours at a time discussing the Sikh way of life and the works of art which he was to create. His desire to learn about the Sikhs and their Gurus had no end and his quest for this knowledge rapidly reshaped the meaning of his life. He had spent his whole life reading the Psalms of David every morning without fail, but upon discovering the simplicity and wisdom of the Gurus contained in ‘Peace Lagoon’, he laid aside the Psalms to read daily the wisdom of the ‘Guru Granth Sahib’.  Shortly thereafter he acquired a white coral mala which took the place or his rosary, along with an Adi Shakti pendant which he hung around his neck in the place of the medals he had worn. His life he kept simple, and it began to revolve around those few objects which, to the careful eye, represented the change of consciousness which had taken place within him. 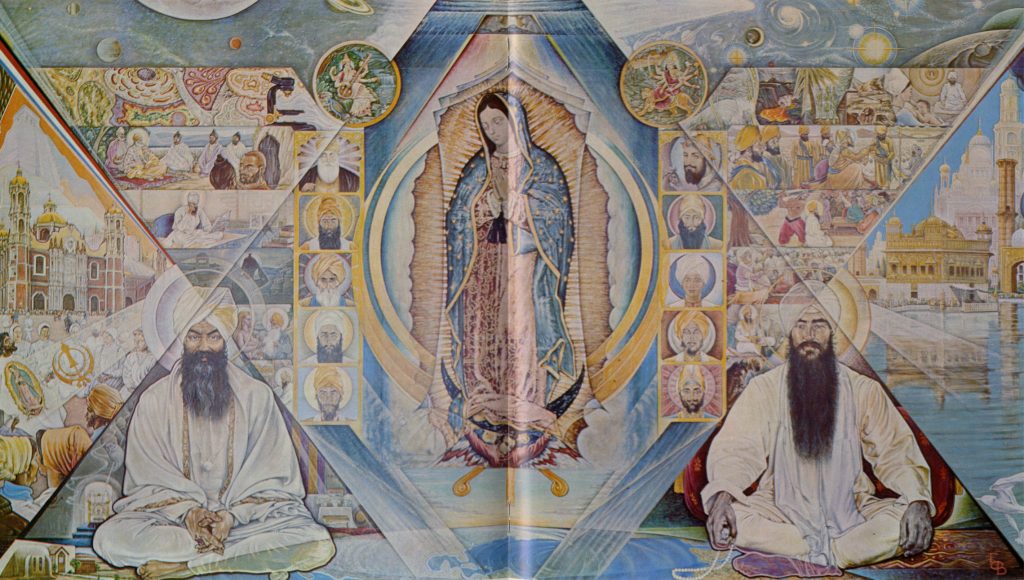 It was during this transformation that he painted his first piece of Sikh Art: the Lady of Guadalupe, surrounded by the symbol of the Adi Shakti, standing majestically over the earth.  It seems as if it was during the creation of this painting that his life totally changed. Shortly after its completion, he told us that he was dedicating his life to the Sikhs and would spend the rest of his life helping spread the concept of the Adi Shakti and the message of the Sikh faith. He then decided to move to the ashram that Spring and to begin work on a mural, which would cover one wall of the Sadhana Room. He was so anxious to begin the work that, when his move was delayed for 2 months, he painted the centerpiece to the mural at his Santa Fe home. It was in April of ‘73 that he moved to the ashram and began his work on the rest of the mural. He never expected anything special for himself and took his place just as any other member of the ashram, with almost unbelievable devotion and determination. He gave everything that there was to give of himself, with nothing to spare as far as the ashram was concerned.

That summer he met Yogiji for the first time and from that time on he never entertained a single doubt about the new direction which his life had taken. His feelings about Yogiji he summed up in a few words, “He’s my man!”.  He worked steadily on the mural until its completion two years later, and it is not possible to describe the two-year period without writing books about how much his presence meant to everyone and how he influenced the lives of everyone around him.

His last mural was by far his greatest achievement, in technique. accuracy, and in recording God’s involvement with him as he worked to create a masterpiece. The mural had just been completed when Mr. O’Brien became sick and had a premonition of his death.  He had given everything of himself to that mural, and he quietly died during the night, within the next week.

At the funeral for Mr. O’Brien, Yogiji said that his death came because he had fulfilled his greatest potential and had perfectly completed his dharma in bringing to mankind the truth of the Universal Mother, the Adi Shakti. There was nowhere for him to grow in this lifetime. Each human being has a potential, but few realize it, and even fewer area able to fulfill themselves and their destiny.

In a technique known only to a few great masters, Mr. O’Brien painted his final and greatest mural dedicated to the Universal Mother and depicting the destiny of the Sikhs. As the mural ages, the under layers of paint will mature and cause the painting to look like stained glass.

The basic structure of the mural is formed by two equilateral triangles, one coming from the earth and rising towards the heavens, the other bringing energy down to the earth and forming a six­ pointed star. The astrological symbols frame the mural, showing the all­ encompassing effect of this universe and its influence upon man’s life. The sign Pisces, representing the Piscean Age, is at the bottom left of the mural and the symbol of the Aquarian Age on the bottom  right, with the cusp of Leo-Virgo crowning the mural.

O’Brien combined the western symbol, the Lady of Guadalupe, and the eastern symbol, the Adi Shakti, to create a blend of the universal mother for all man. The truth and purity of this feminine principle being the center point of focus for the mural, Mr. O’Brien shows the undefined, pure energy, taking form as it comes from eternity, through the sphere of sounds, down through the color spectrum into the physical form of the Adi Shakti. Above her shoulders are two eastern goddesses, Saraswati and Bhagauti representing the aspects of beauty and balance in the life of a God-conscious being.

At the top of the mural (on one side) the universe is actively being created and on the other side it is in repose, waiting for life to be formed. Below these two sections, life is depicted taking form, from the microcosm into the cellular world, through the elements of earth, air, water and ether as it grows from the planets to animals to man.  In these four sections, the creation is seen both in the macrocosm and the microcosm, in the past, present, and the future.  Showing God’s constant involvement with His creation.

On both sides of the Adi Shakti are ten portraits. The first of the ten is Guru Nanak and the last Guru Gobind Singh. The middle eight portraits represent the expression and realization of the lives of the other eight Sikh Gurus, through those who will live to fulfill the prophecy of Guru Gobind Singh in the Western Hemisphere.

To the side of each portrait is a miniature painting detailing a virtue and significant event from the life of each Guru, to serve as a source of inspiration. The left side represents the formation and foundation of the Sikh Dharma, while the right side represents its activity and projection of the Khalsa into the next 5,000 years.

On the left side of the Adi Shakti is a portrait of Yogiji with no pillow of rest behind him, representing all the time and work to be spent in preparing the destiny of this country. His foot rests on the United States, symbolizing his mission of coming to this country to train teachers and inspire many to a new way of life.

To the right of the Adi Shakti is a portrait of Mukhia Singh Sahib Wha Guru Singh as Mr. O’Brien saw him in the future and reflecting the attributes of Guru Ram Das. The pillow behind Wha Guru Singh is a symbol of our widespread popularity in the East and of the prophecy that our generations would return to teach the Indian continent and prosper for the next 5,000 years.  Next to this figure is the Golden Temple with its nectar tank in the foreground.

The last scene painted by Mr. O’Brien was the Lady of Guadalupe appearing to Don Diego and telling him of her mission to crush the evil serpent of misunderstanding and abuse among mankind. As her image is being imprinted on his poncho, to prove her presence and intentions to the Catholic Church, she is filtered through an imposed Adi Shakti symbol, showing the universality of her mission in the east as well as in the west.