Home › Experiences › Our Stories › Expanding the House of the Teacher 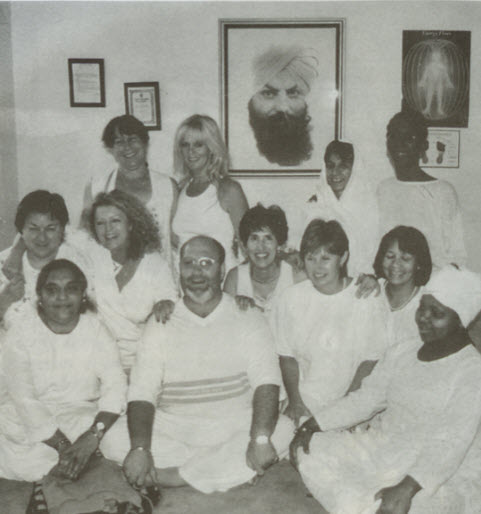 When Yogi Bhajan would look you in the eye and say, “Go to Amsterdam,” he was tuning into your destiny. He was also feeling the longing of the spirits of the people who were living in those places to which he sent us. So it was natural that once people started teaching, small yogic communities began to spring up all around the world.

“You’ve had the blessing to have the touch of the teacher, now you serve others with that,” said Yogi Bhajan. At first we lived in ashrams (literally, house of the teacher), usually a large house in which a yoga teacher and several yoga students lived together. We didn’t know what living in an ashram really meant, and we experienced many pitfalls and stumbling blocks as we figured out how this was going to work. It was really an experiment and Yogi Bhajan guided us along the way. He telephoned us, encouraged us, and he always brought us back to solstice gatherings to regroup, be re-inspired, and learn more of the teachings.

Events like Solstice Celebrations were very important when we first began to build our communities, and they still are, because they bring our collective body together—our intelligence and our spirit. Together we continue to create a synergistic global network and community.

Yogi Bhajan told all women to attend Women’s Camp every year. He said, “If you want to keep your marriage and family together, come to camp. Learn to be a woman of dignity, and strength.”

These events built the 3HO community and are still the foundation blocks for Yogi Bhajan’s vision. At these events and our regional Yoga Festivals we nurture our global community network.

At first, many of us were content with subsistence level incomes, because we just wanted to do yoga all day. Then we learned that financial prosperity was important so that we would have the means to serve others and gracefully take care of our families. Communities became very creative in finding ways to financially maintain themselves. Golden Temple gourmet vegetarian restaurants sprang up around the world. They provided a place for us to work together, and where we could wear our hair long, our yoga clothes, and for some of us, our turbans. We were able to work in an environment that supported our values and spiritual development.

Communities changed and grew over time as people married, had families, businesses developed, and our priorities shifted. People began moving into their own homes in nearby areas, and always, as we spread out, we tried to maintain our group sadhana and other community activities. Today, for all of us who practice Yogi Bhajan’s teachings, that longing to be together in the spirit holds us together in community.

Most of the first ashrams used a Piscean model, in which the ashram director was in charge of every aspect of running the ashram. As Yogi Bhajan nurtured each community, and as the times changed, these students became more personally empowered. With that empowerment and inner stability that they developed from their sadhana, ashram structure changed from having one single ashram director, to a more Aquarian model with a collaborative team that worked together to set the guidelines of ashram life.

There is a great expansion of the teachings around the world now. When it is time, and when a soul is ready, the call to teach is heard. As in the days when Yogi Bhajan heard the calling of our souls, saw our destinies, and told us to become teachers, many of those who are today practicing Kundalini Yoga are able to hear that call, and go out and teach in the spirit of humility and service. As our global spiritual community grows, surely in the not too distant future, the sound of Sat Nam will be heard wherever a soul is listening.

Tarn Taran Kaur Khalsa started teaching Kundalini Yoga in 1972 and nurtured the 3HO community throughout Europe and the U.S. Together with her husband, Tarn Taran Singh, they established 3HO Germany and Yogi Tea Europe in 1975. She is a KRI Teacher Trainer – Level I and II, the International Program Director for 3HO WOMEN (www.women.3ho.org), and the main trainer for the KRI Specialty Training: Conscious Pregnancy©. She authored Conscious Pregnancy: The Gift of Giving Life and she resides in an adobe passive solar home in Espanola, New Mexico, between her global teaching seminars.

Home › Experiences › Our Stories › Expanding the House of the Teacher