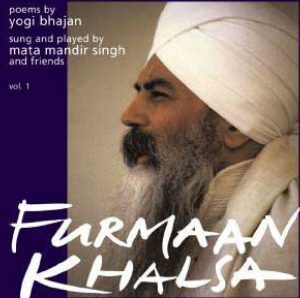 In 1991 Mata Mandir Singh and friends put a number of poems from the book Furmaan Khalsa  to music and recorded them. This album is drawn from the basement tapes produced in Mata Mandir Singh’s recording studio in Amsterdam, Holland in decades past.

“The gentle arrangements of the music, together with a mixture of the words in English and Gurmukhi, lead you into the depth of God-consciousness, carried by music of great variety” (Sat Nam Europe).

You can also stream this album via Spotify

You can purchase this album through Sat Nam Versand here 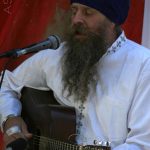 Mata Mandir Singh was born in 1952 in the USA. Mata Mandir was an early student of Yogi Bhajan and has taught Kundalini yoga and gatka (Gatka is an ancient martial art used by the Gurus to help defend the religious beliefs of Sikhs and also those of other religions) for decades. An expert in vegetarian cooking, he was also the owner of the Golden Temple restaurant – which was one of Amsterdam’s oldest vegetarian restaurants. Mata Mandir Singh specializes in yoga of sound, naad yoga, and has produced more then 25 CD’s and tapes with mantras where he plays guitar and sings.