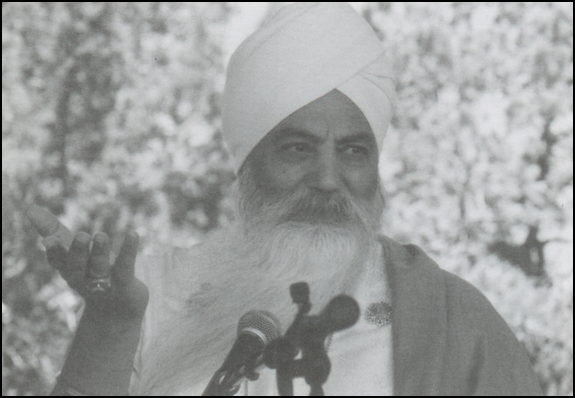 A lecture by the Siri Singh Sahib, Yogi Bhajan on June 30, 2002 and shared in the Fall, 2002 Aquarian Times Magazine:

We have been discussing certain aspects of Sikh Dharma in different ways. First, remember that Sikh means student. We have to learn. What is the necessity of learning? The greatest possibility of that learning is we must understand that God is in us, God is around us, God is a part of us, and we are part of God.

That’s why Guru Nanak started with Ek Ong Kar- “There is one Creator of the whole creation.” And at that time, it was a new thought. God was there in many forms, and for some there was only one God. But man was never recognized as part of God.

A very long time ago, religion separated man from God.  It was evident that you had to worship God who was somewhere up in the sky. It was considered that God and man and man and God were two separate identities. So, duality was practiced.  And then, when God wanted to improve mankind, He appeared in the form of a prophet or Avtar (incarnation of God) or something like that. That was the basic belief.

When Guru Nanak said, “Man and God and God and man are the same,” it started a revolution. People started questioning how can that be. All religions will admit that God created the universe, but they are not willing to admit God is in you.

Guru says, “Ang Sang Wahe Guru.” Ang means any limb of the body that bends and works and moves.  With it Wahe Guru, “the God,” is.

The second concept that Sikh Dharma developed at the time of Nanak was Akal, the deathlessness of the man and that of God-the ultimate relationship. People were not willing to believe this thought. There was a huge conspiracy against Nanak. This concept was not acceptable under any circumstances.

Likewise, in cosmology, today we know that the sun is just one of millions of stars. At the time of Nanak, this was an impossible idea.  But Nanak said it, “There are thousands of worlds and underworlds both solid and etheric. Searching through them all, in the end, will only make you tired. The Torah, the Bible, and the Koran say that there are 18,000 worlds. But at the root of them all, there is only the One. Our sun and this universe are just one of many.”

So technically speaking, man wants to accept God as he wants to. For thousands of years, as we know, God was separated from man.

Do you know how comfortable it is when you walk, having the realization that God is walking with you; when you talk that God is talking in you? That should always be our standard and elevated sense of God. Your behavior, your manners and your virtues should be that of infinite divinity. You know how comfortable it is?  How powerful this is? How marvelous this is? This is what Sikh Dharma is all about.  A standard reflection of divinity, into the royally and reality of that creativity which in essence is nothing but divinity, which has to be accepted in the Age of Aquarius. This is what the Age of Aquarius is all about.

The essence has to be understood. l feel you all know it. Be firm on it. Be real about it and see how beauty, bounty, and bliss come to you. May prosperity and all powers serve you and may Mother Nature nurture you as the most beautiful pure being.

Read the lecture in the Fall 2002 Aquarian Times Magazine.