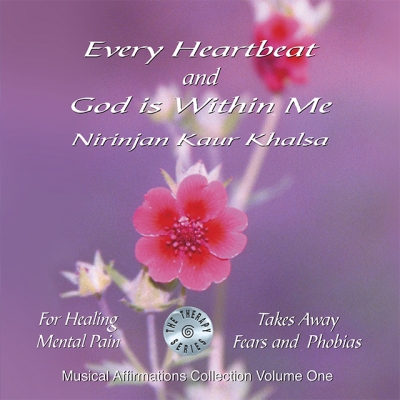 The poem “I, Me and Thou” from the book, “The Game of Love” by Yogi Bhajan is part of the song affirmation “Every Heartbeat”.

Here is the original poem:

Listen to the song affirmation “Every Heartbeat” online courtesy of SikhNet

Nirinjan Kaur Khalsa’s (Espanola) signature sound and contribution to the musical world of 3HO and Sikh Dharma during the 1990’s is undeniable. In 1992, Volume 1 of the Musical Affirmations Collection, comprised of the classics  “Every Heartbeat” and “God is Within Me,” was remastered and rereleased.  Musical Affirmations Volume 1 is used for White Tantric Yoga worldwide even today.

According to  Invincible Music, “Every Heartbeat” is designed to heal mental pain by giving hope and a deep understanding of spiritual truth. “God is Within Me” is wonderful as background music or for meditation. This soothing album with beautiful lyrics feels as if it removes the worries of the world. The voice of Nirinjan Kaur has a rare quality that is soothing, meditative, and truthful. The ancient traditional chants are enhanced with English lyrics written by  Yogi Ji , master of white tantric yoga and Kundalini Yoga. These lyrics contain the essence of the ancient chants and together, the two languages create a powerful synergy.

This album is available for purchase through Invincible Music

The Story Behind the “Affirmation” Songs Sung by Nirinjan Kaur

The Beads of Truth magazine interviewed Guru Prem Singh on March 24, 1990, about making music with Nirinjan Kaur and his artistic process.

Q: I understand the Siri Singh Sahib has called them “Hypnotic Tapes.” How did you get started making them?

A: I started out simply wanting to have a hobby. Since I already had a musical background I looked around for an instrument to play. I realized I couldn’t afford the piano of my dreams, so I settled on a synthesizer and a cheap tape recorder. The very first tape I made was with SS Ram Das Kaur. It was a  Guru Ram Das Chant .

Q: Then what happened?

Q: When was that?

A: In 1985. I was just experimenting for nobody but my own ears. What happened was that I started accumulating equipment a bit at a time. It’s funny that as my ‘studio’ became more elaborate, I thought to myself, “I hope the Siri Singh Sahib doesn’t find out about this studio, because I’d never get any sleep.” I didn’t know enough of the technology yet to really make tapes well. I was still exploring the massive technology in music engineering and sound design and music production – which normally takes many years of intensive study to learn.

Q: You say this is a hobby. What are you doing as a profession?

A: I teach Kundalini Yoga classes and work at the Khalsa Medical Clinic as a Corrective Physical Therapist. Prior to that I had been a Gymnastics Coach for a Los Angeles High School.

Q: Obviously the Siri Singh Sahib did find out what you were doing? How did that happen?

A: M.S.S. Hari Jiwan Singh wanted to make a tape of himself singing a certain song as a gift for the Siri Singh Sahib, so I helped him. When the Siri Singh Sahib heard it, he asked “where did you make this?”  Hari Jiwan Singh told him I had a studio. Two weeks later he heard the “Wahe Guru” shabd that I had done with Jaspal Singh, and again he asked “Where did this come from?” I think that did it, because then he knew someone in Los Angeles could make quality tapes.

Q: What was your first assignment from the Siri Singh Sahib?

A: That was the  Ong Namo Guru Dev Namo  mantra that he gave me to do with Nirinjan Kaur. This is the opening track on the album  Meditations for the Aquarian Age.

Q: How do you decide on the melodies and arrangements?

A: The very first tape (Ong Namo) was totally his melody. There was nothing to decide. The second tape, Har Nar Wahe Guru – he gave me the rhythm. He said he wanted it in a five beat rhythm, which is very unusual and very challenging to make something like that work.

Q: Did he continue to give you further instructions?

A: At that point he really got busily into it. He called me at 1 a.m. to come over immediately and “bring all my equipment” I said, “that would take about a week!” So, he told me to just bring some of it over. When I got there, he kept throwing out very unusual musical ideas of what he wanted and to make matters worse the equipment was not functioning right. I felt like a failure! I thought he would never want me to make any more tapes. He said this was my ‘musical initiation” and told me to “go home!”

A: The next day was the craziest of all. He told me, “I want a tape a week.” (Which ended up being one every two weeks). I would get lyrics from him in the strangest ways, over FAX machines, scribbled on paper napkins, people handing me pieces of paper with new lyrics – or he’d call me personally while I was at work, or at home in the middle of the night, and start telling me over the phone the words to poems he wanted put to music. Fortunately Nirinjan Kaur was able to catalog these, so I didn’t lose any of his ideas. In the early stages he would tell me how he wanted each tape done. I’d come back in two weeks with the finished product and he would say, “That’s not how I wanted it.” And I’d have to redo the whole thing in a different way. It was very hard in the beginning to please him and so it was very time consuming. He also used to decide the instrumental background. He was very graphic in his description of everything. He wanted “ Bountiful, Blissful, and Beautiful” , done to a march. “Peace and Tranquility” he wanted the percussion extra strong and powerful. Each tape was made according to his exact direction.

Q: Did this process change?

A: Yes, at one point he directed me to make a certain tape that I really didn’t want to do, so I slipped in another one I had been working on – without any input from him on how to do it. When he heard it, he said it was great and I was really happy.

Q: Did he stop giving you input then?

A: He said something like, “I don’t care what you do, just give me tapes.” And he stopped giving me specific detailed directions and now only gives me the poems, affirmations and mantras to produce – with no other guidance.

Q: Can you describe the creative process you go through in making these tapes?

A: I look at the words he gives me, and the music jumps into into my head very quickly – along with what to do with it. That’s the easy part. Then, the actual arrangement and recording process takes 40 to 50 hours. I record one instrument at a time, layer upon layer, until it’s done. Usually it means putting together about 30 parts. Except  Tantric Har , which was probably the quickest production I have done, it was complete in a day!

Q: As background for many of the White Tantric Video Courses and during his terrific healing/meditation classes, the Siri Singh Sahib has been using the tapes that you and Nirinjan have made. What would you say is the distinctive feature of your music tapes? They seem very special.

A: There are three features that make them unique. It is a combination of:

1) Using either a pauri or a mantra from Gurbani – in Gurmukhi, and adding the Siri Singh Sahib’s poetic interpretation of that in his very special style of English.

2) Then we have the exceptional style of Nirinjan Kaur’s singing, which Siri Singh Sahib Ji has described as being able to “cut through and deliver the goods.”

3) We strive to produce and record the arrangements in a musically interesting and entertaining style that will be enjoyable and command the attention of the listener.

Q: Do you have anyone else helping you produce the tapes?

A: Absolutely, Amrit Singh, a yoga student, the most wonderful guitar teacher and player I’ve come across. Equal accolades to Bryan Celano who has been my tutor in music production. Nirankar Singh has also helped me on several tapes for which I’m grateful.

Q: What is the feeling or experience about the spiritual results for you of doing these tapes?

A: I’ve gotten to know a facet of the mind of a Master, in a way I would never have gotten to discover. Siri Singh Sahib Ji has let me into a chamber of his mind. I feel very blessed to be the sugar coating on his message. I get to make it “taste good!”

Thank you Guru Prem Singh and God bless you!

Read more about these affirmations here. 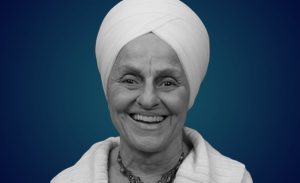 Nirinjan Kaur Khalsa was instructed to start recording music by Yogi Bhajan many years ago – he was intimately involved in the style, cadence, and melodies of her music and felt that this music fulfilled an important need in the meditations of his students.

She was blessed to study and serve Yogi Bhajan as chief of Staff from 1972 until his death in 2004.  Her main focuses were facilitating his work and communications with his students, as well as with his business, political and social contacts.  During that time Yogi Bhajan also trained her in his method of providing spiritual names to all who requested them.  Today, with his blessings and using his technology, she gratefully and joyfully carries on the legacy of giving spiritual names through 3HO.  Her passion is exploring new cultures and meeting new people and the 3HO communities worldwide.  She adores animals and nature and is always ready to adhere to Yogi Bhajan’s directive:  “Relax and have fun”. 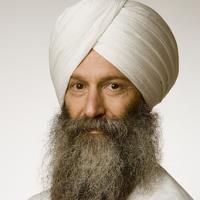 Under the direct guidance of the  Siri Singh Sahib, Yogi Bhajan , Guru Prem Singh Khalsa (Posture Master) of Los Angeles has produced over 30 songs featuring the voice of S.S. Nirinjan Kaur Khalsa and other artists. 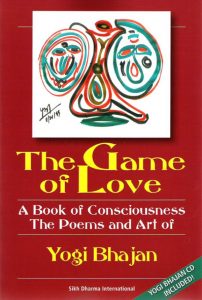 You can also find this poem in the book, The Game of Love: A Book of Consciousness – The Poems and Art of Yogi Bhajan.

An intimate experience of Yogi Bhajan, the man, the teacher and the master, through his collected English poems, illustrated with his own drawings. The book is filled with deep insights into how to have successful relationships, both with oneself and others. At its essence, it is a guide to living in the 21st century and beyond.

The hard copy includes a CD of Yogi Bhajan reciting his poems!

You can find this book on the SDI marketplace.