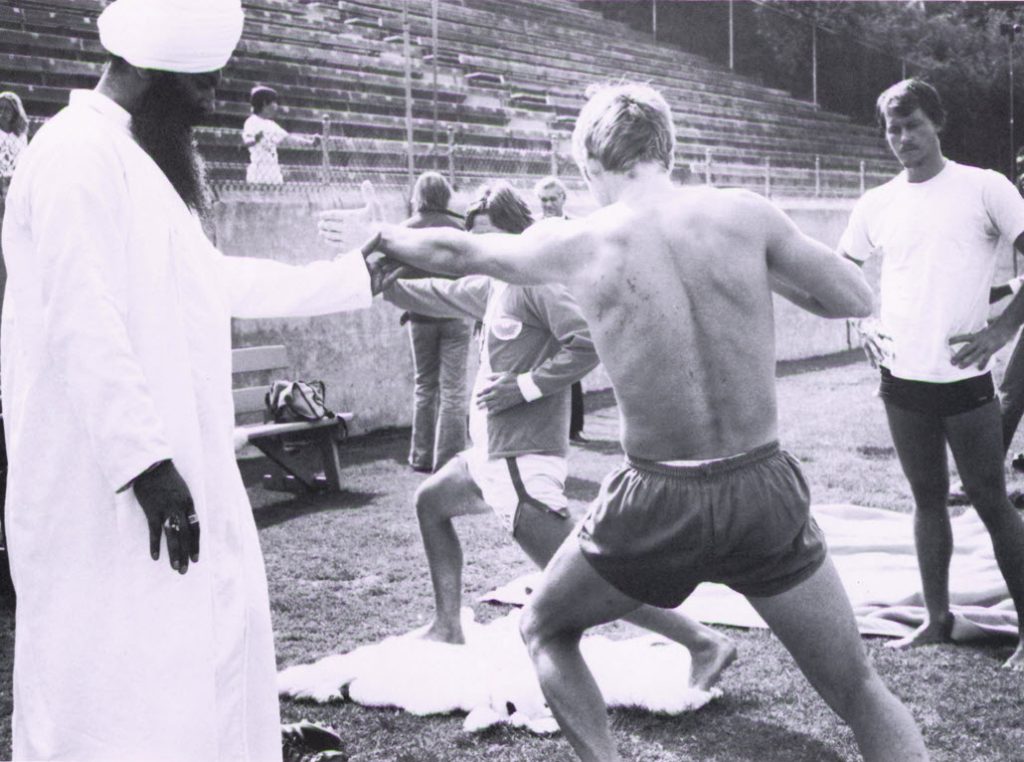 This was written by M.S.S. Gurucharn Singh Khalsa PhD &. M.S.S. Gurushabd Singh Khalsa of Boston, Massachusetts, as shared in the “Kundalini Yoga” section of the book, “The Man Called the Siri Singh Sahib”, which was published in 1979.

When Yogi Bhajan came to the United States of America in 1968, he had not intended to stay and teach Kundalini Yoga (the Yoga of Char dee kalaa).

However, when he saw the low point of the America consciousness, blended with its open sincerity, he knew Kundalini Yoga was the proper vehicle for the elevation of those souls.

Nothing short of Kundalini Yoga could repair the nerves and open the hearts of those people longing to know themselves and accomplish their potentials.  In those early days, many people criticized him for openly teaching Kundalini Yoga.

He put no requirements on who came to classes and he initiated no one.  He acted with faith that service to the house of Guru Ram Das would bring those who should come.  He proclaimed that he had not come to collect students; he had come to create teachers.  He came to help those people who chose to fulfill themselves as leaders, teachers, and people of spirit.

As students of Kundalini Yoga and as participants in an unfolding of both consciousness and history, we find it a tremendous challenge to try to convey the power, vastness, and subtlety of Kundalini Yoga as taught by Yogi Bhajan.  In each class, he is complete, relevant, and inspiring.  In some classes, he seems to address not just the people present, but future generations.  To him, the future, past, and present, are all a single tangible reality in the vision of God.  Occasionally, he begins a lecture with statements like: “Listen carefully, I will go slowly, but I know you cannot understand what I say, so I speak to your children’s children”, or “Tonight, listen to the sound of my words.  It is a meditation.”

As a systematic awakening of consciousness, Kundalini Yoga is quite old.  Its origins predate the Vedas.  It was developed through a practical, empirical, approach; exercises were tried, effects were observed. It was trimmed of irrelevancy and redundancy until it evolved into a streamlined, practical system.

This system was practiced for centuries.  As time passed however, the system became fragmented.  The sense of the whole became lost.  A science of total consciousness became split as the people who came looking for its rumored power.

It became a “secret” because knowledge of Kundalini Yoga was a great source of power for an individual, and this source of power was sometimes judiciously or jealously withheld from others.

Fortunately, there were certain masters of consciousness who took the written fragments and oral translations and re-established the teachings total form to fit the time and space in which they lived.  Thus, we find Guru Nanak Devji and Guru Gobind Singhji teaching the Yoga of Char dee kalaa in the context of Sikhism.

Under the house of the Sikhs, these teachings have been completed for the Aquarian Age.  For instance, Guru Nanak chanted sat kartar in Naad Yoga to master time and space and to recognize the creativity of the Infinite.  Guru Gobind Singhji taught his warriors to chant the Guru Gaitree Mantra in postures which gave them courage.  Today, Yogi Bhajan has even added some English mantras.

The essence throughout the historical unfoldment of these technologies is the same – Kundalini – the dormant power of spiritual consciousness that, through the Grace of God and Guru, can make a person fully aware of God.  These teachings belong to the people who have the consciousness to be creatures of God and live for each other with dignity, courage and compassion.