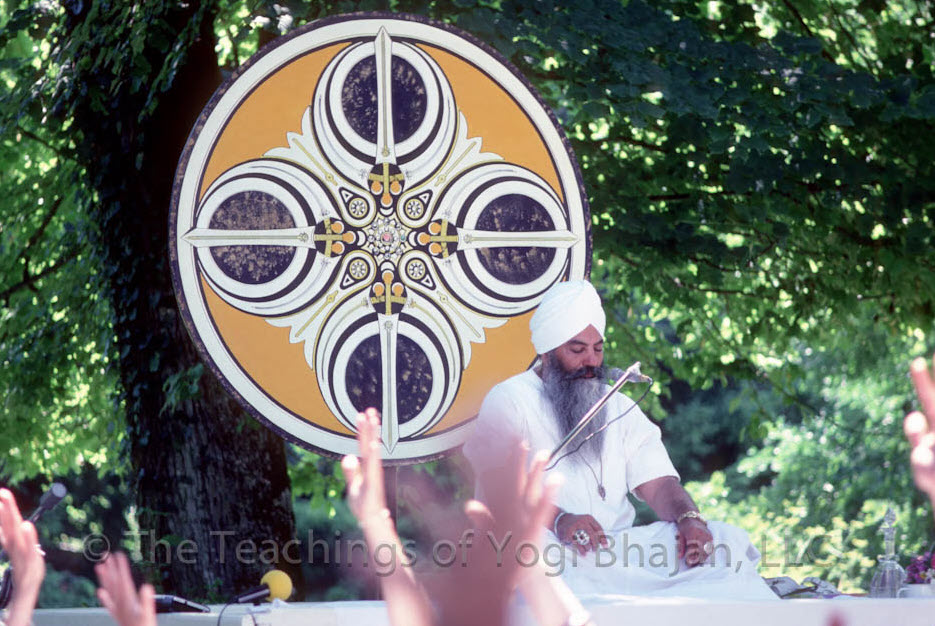 “In White Tantric Yoga energy is created en masse to purify the physical and mental bodies, and the soul, which is already pure, starts relating to the very existence of the being.” ~Yogi Bhajan, March 1972, Washington, D.C.

In 1971, Yogi Bhajan told his secretary that he had just become the Mahan Tantric.  She, out of her curiosity, asked him what that meant and what it was.  He explained that when he was young, he had studied with a very great saint, Sant Hazara Singh, and this saint was the Mahan Tantric.

He also told her that there is only one Mahan Tantric on the earth at any one time.  This man had been very great.  He was so great, and such a good Sikh that he could recite the whole Siri Guru Granth Sahib by memory, and he would do it in one sitting!

There was one other person, a fellow disciple, studying with him at the time.  Santji would give them kriyas (exercises including posture, breathing, and mantra) to practice, sometimes for hours on end.

Students of Yogiji had been purifying themselves with Kundalini Yoga for two years and by the Grace of God and Guru, they now had White Tantric Yoga to further increase and speed up the process of their growth.

White Tantric Yoga can only be experienced directly under the supervision of the Mahan Tantric; there is absolutely no other time or way to practice it.  One cannot even practice the kriyas again except when given in the context of another course guided by the Mahan Tantric.  The reason for this is that the Mahan Tantric is a direct channel between the people doing the exercise, their subconscious negativity, fears, insecurities and blocks, and the Infinite or Universal Conscious Mind. 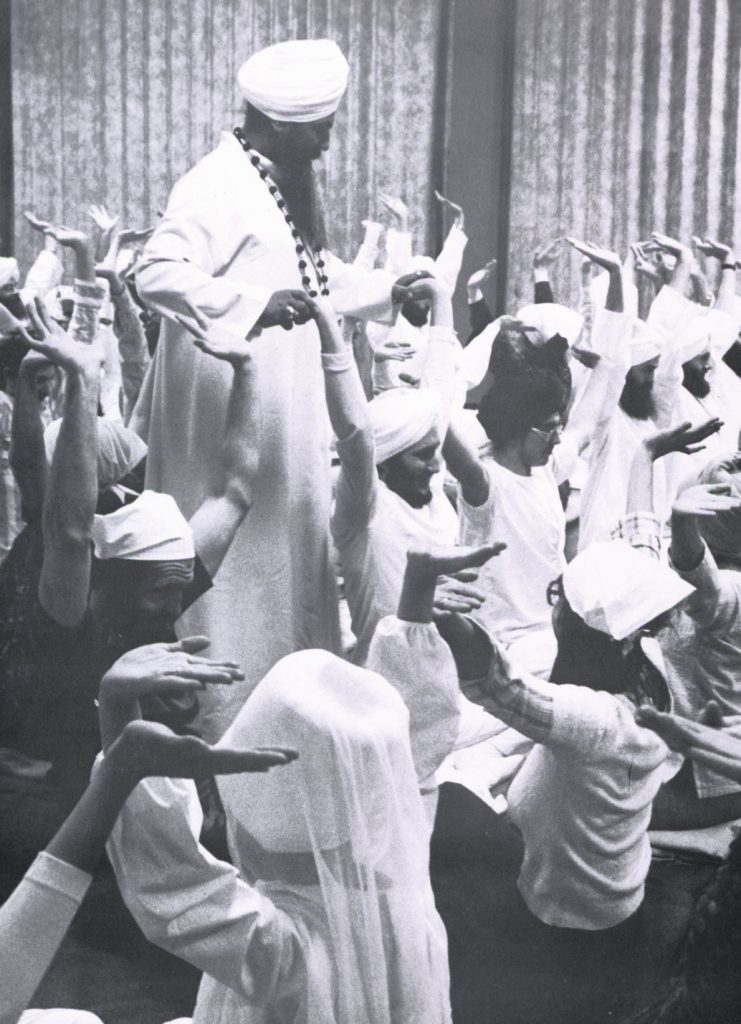 “During White Tantra, the infinite energy of the universe flows through the Mahan Tantric into all of the participants.  White Tantric is no ordinary yoga.  It cannot be practiced without the Mahan Tantric present because it takes his mastery over emotions for it to be not only effective, but safe.  Partners face each other in lines while the Mahan Tantric physically sits in front of the group and projects his own astral body to encircle the group.  He, thereby, extends own psycho-electro- magnetic field to encompass the group aura.

“During a White Tantric meditation, a lot of subconscious negativity from each participant comes to the surface.  In order to release that negativity, without its projection onto the partner, the Mahan Tantric filters the negativity through his own consciousness and controls the group energy with his own extended energy field.  This field acts as a protective shield so that the students’ auras, which carry the imprints of their negativity, cannot merge with each other and their destinies cannot entwine.

If the Mahan Tantric himself were not totally detached, the negativity released from such a group would make him ill, if not kill him.  The participants’ auras must ultimately change to blue and gold, representing devotion and perfection.  White Tantric Yoga needs special circumstances.  It has to be a special teacher and yields special results.” ~ MSS Gurushabd Singh Khalsa, as told to him by the Siri Singh Sahib

Today, we have a teacher among us, the Mahan Tantric of this period of time, the Siri Singh Sahib, who has been prepared by his experiences of life to share these techniques, who has been filled and inspired with the love of his God and Guru to share that love and that light with as many people as he can contact.

His efforts to bring this cleansing experience to as many as possible have required him to sacrifice most of his personal life and to undergo great mental and physical pain in the process of our healing.  These techniques are offered as a means of clarifying the natures of men and women and enable them to understand their relationship and the beauty of the interaction between the two cosmic polarities of male and female.

“This morning in my meditation, I just saw certain things, which are even amazing to me.  But I understood from that vision what kind of handicaps I am working against.  “I saw a big beautiful horse which was trying to move forward, but with every step it was stepping on its own tail.  So I had to realize that I cannot be upset at the speed with which we are progressing. After all, it is most difficult to try and grow a lotus in the Gobi Desert – rather it may not be possible.  This Western Civilization is a great horse, which is not in a position to use its own four legs and can only hop on its own tail.I also could understand that I am running a hospital, but there are no doctors and nurses in this hospital; the patients themselves are running everything.  God bless my endurance and may He give me enough patience to work with these patients!”

“Tantra is the spun fiber of the Cosmos,  Whosoever knows the diagonal energy knows the Will of God.”

“Tantra is the longitude and latitude of the creativity of God.”