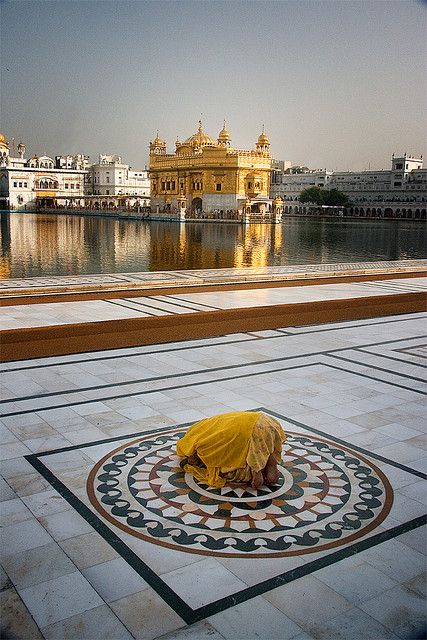 Guru Dass Singh Khalsa was 20 years old when he as a newly converted Sikh did Ishnan seva at the Golden Temple. He was even honored to play kirtan at the gateway to Darbar Sahib.

In 1984, when the news of the attacks against the Golden Temple came, he was struck with sadness and was overtaken with a feeling of powerlessness for weeks.
As he thought of the incomprehensible and painful situation, he began to remember what it felt like to be there and a profound feeling of longing welled up in his heart. These words came to him:

The whole day he repeated this over and over. When he arrived home, he took his guitar and wrote these additional verses:

The silence of death has killed the song so ageless
The turning of the pages
The prayers of the poor
The water’s turned red
The sky above has darkened
And amidst these walls of silence
Our prayers can be heard
The earth cries in pain
Its heart has been broken
Her sons have been stolen, imprisoned and slain
Yet those who remain their spirit grows stronger
They suffer no longer, sheltered in the Name

When he got the opportunity, he sang this for his spiritual teacher, Yogi Bhajan, who felt the devotion behind it, bowed his head and teared in the eyes.

Later Yogi Bhajan told Guru Dass Singh, “The song is beautiful, but it needs another verse. One that inspires hope and victory in people’s hearts.”

That afternoon he again sang it to Yogi Bhajan, who cried again and later said, “It is done, now sing for the world to hear.”

As we commemorate 37 years of this painful episode in our history, may this song remind us and the world of the spirit of love, devotion, sacrifice and perseverance with which the Sikh nation has endured this and many other dark chapters of our history. It is the spirit of Nanak Naam Chardi Kala Teri Bani Sarbat Da Baala – always looking up and forward, as the light of the Naam shines through one. It reminds us that Karta Purkh is the Doer of All, that behind the illusion of pain and suffering is the hand of the Divine moving the pieces of the inexplainable game of life. It is by Gurprasad (Guru’s Blessing) that we live and prosper and are blessed to live as Sikhs (disciples of Truth).

It is by Grace that we walk on the cold marble…again.

Here is a music video created by Sikhnet, which pairs the music and beautiful images of the Golden Temple:

You can also listen to this song here and it is available for purchase, as part of the “Train to Amritsar” album, which is available from Sat Nam Europe.