Home › Experiences › Our Stories › Passenger on a Magic Carpet 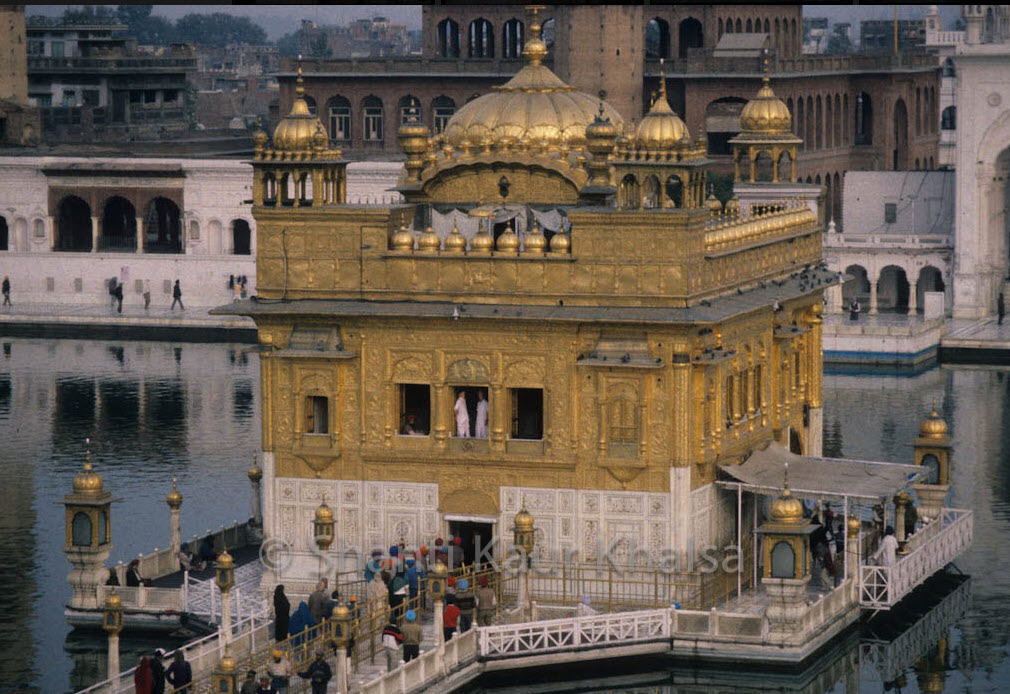 Once taking Sikh vows at summer solstice 1990, my life seemed to change, as if being a passenger on a magic carpet.

In 1992, I was accepted to move in to the Millis Ashram, and barely 6 months later I was to go on a “Yatra” (spiritual journey) with Yogi Bhajan, his wife BibiJi, and family, along with 150 or so other students/Sikhs/seekers to visit my spiritual “home”, the Siri Harimandir Sahib, known as the Golden Temple, for the first time.

During a Sunday Gurdwara at the ashram, there was an announcement of an upcoming Yatra to India.

Never having been to India, and relatively new to the Sikh path, I had no clue of what a Yatra was all about, and was prone to avoid an expensive ‘tourist’ trip that I could not afford.

Over the winter, while out of work from my seasonal job as a real estate sales agent, my savings from the previous years earnings were depleted, and I was to just have started back to work renting apartments in Boston, when this trip was to occur, yet I found myself reaching into my pocket for my credit card and handing it over to the person taking reservations.

$3500 was a lot of money for a 2 week trip in those days, yet I was to discover that no amount of money could ever pay for the experience of being on that trip with the master.

The entire trip was like a whirlwind with so much packed into so little time, yet we were kept up by keeping up!

After a 13 hour flight from L.A. , we had a brief stopover in Bangkok Thailand, where we were whisked to 2 separate Gurdwaras in our honor- each with huge lavish, sumptuous Langars -just hours apart from each other, before boarding the plane for the final leg into Delhi.  After visiting the historic Gurdwaras in Delhi, where the Siri Singh Sahib was to give a captivating talk in Punjabi, in front of the Sangat there, I of course was unable to catch what was being said, but from the expressions of those in attendance I could see he was communicating effectively.

From Delhi, the next day, we set off by bus, on a long slow journey to Dehra Dun.  In those days there were no super highways for fast travel in India like there are now. The streets were narrow, often pothole laden, and always lined with people.  Dehra Dun housed what was to eventually become Miri Piri Academy based in Amritsar, but In those days the appearance of the school looked pretty rustic to me.

I had never heard of Dehra Dun and expected it to be some small town. That was not to be the case. The streets were packed tighter than anywhere I had ever seen! Times Square in Manhattan was less bustling.

We were soon back on the bus, for the next stop – a one night stay in the Rishikesh.  Here we were hosted in a huge ashram by a friend of the Siri Singh Sahib’s.  At sadhana the next morning, the 2 friends shared the stage and I recall a quote from our host, Yogi Bhajan’s swami friend: “Money comes and goes, Morality comes and grows”.

We returned to Delhi that day very late at night where we got maybe 3 or 4 hours of sleep before catching a train to the Punjab at sunup.  Little did I know that there would be throngs of people at each stop as our train proceeded from Delhi into the Punjab! Crowds of people waiting to greet us and of course the Siri Singh Sahib, who was to be lavished with dozens of garlands of fresh flowers, as he came out of the train at each stop.

I had brought a video camera with me, so while on the train I decided that a video of the trip would not be complete without interviewing Yogi Bhajan. I was to find out the historic significance of the trip, as it unfolded. We were later shown some write-ups in the newspapers of us 150 western students all dressed in white returning with Yogi Bhajan to his homeland, as being among the first group of foreigners allowed into the Punjab following the horrific events that unfolded after operation “blue star” in 1984.

However, at that time I was still pretty much in the dark of how momentous this trip was to the Siri Singh Sahib, and would become for us, so I approached him from the rear with the camera in position, oblivious to the fact that he was in deep meditation.  As I pointed the camera at him I roused him saying: “Sir”. In that brief instance, as he opened his eyes, I could glimpse the sorrow he must have been feeling of all that had taken place in his beloved homeland, regardless of his attempts at trying to stop it from happening.  All he did was brush his head from one side to the other, waving me away.

Needless to say, I beat a hasty retreat.  I began to ponder the meaning of his reaction, which eventually led me to begin to realize that this was no tourist trip we were part of.  From that point on, I began to see the trip in a different light.

Upon eventually arriving in Amritsar, and seeing first hand the remnants of the destruction outside the Golden Temple grounds, and of course the Akal Takhat, which was still being rebuilt, along with holding close and sharing the outpouring of love for our Punjabi brethren  who lived through this traumatic time, shared with us, and then experiencing the holiness and peace within the Golden Temple, that resides in the hearts of every Sikh, I began to understand.

When we returned to the U.S. and the reality hit me of having this huge credit card bill, along with my rent, and various other bills about to come due, yet still reverberating from this life altering trip, I was to find in my 1st week back to work,  every single client I showed apartments to rented one from me, which paid for the whole trip!  It was the most lucrative week I had ever experienced by far, while in that line of work, before or since. “Money comes and goes, morality comes and grows.”

In humility and gratitude,

Home › Experiences › Our Stories › Passenger on a Magic Carpet