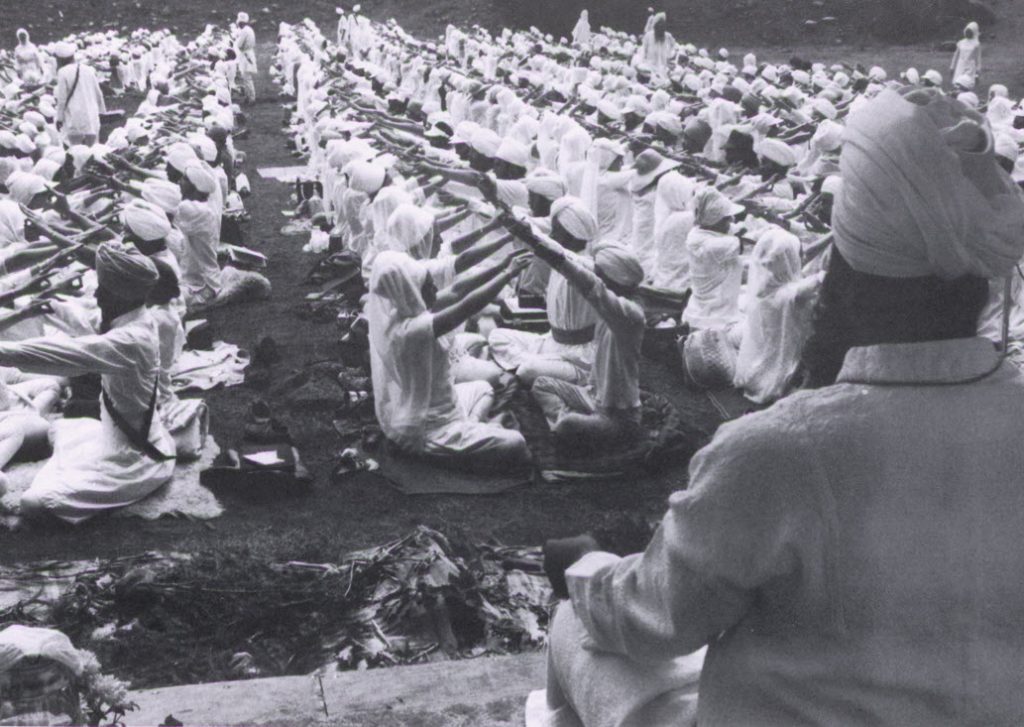 Written by M.S.S. Gurushabd Singh Khalsa from Boston, Massachusetts and shared on pages 172-174 in the book, The Man Called Siri Singh Sahib, which was published in 1979.

My first experience in White Tantric Yoga was excruciating.  We were in the mountains of Paonia, Colorado.  I sat opposite a woman I had never seen before, and along with three hundred people, began an ancient White Tantric kriya.  It started out innocently enough with fixed gaze and benign-looking arm movements, but then after five minutes I began to feel a little White Tantric Yoga went a long way.  We continued until we had reached the 31- minute mark, switched partners and began again for another half hour.

I felt relatively on top of things, but in the next round of one hour, my rational mind felt the pinch.  At first, when the pain started impinging on my self-image as a strong young male, my ego stepped in and took up the fight.  I had to keep up because I was a strong man and I couldn’t let this poor frail woman down.  That thought was adequate for a short burst of energy, but it did not seem to generate much sustaining power in my arms. It was best when I just chanted the mantra and kept my eyes steadily linked with my partner’s.

I noticed that if I looked away it seemed to break the energy link between us and the pain in my arms would become more noticeable.  So, out of self-preservation instinct, I kept my eyes glued to hers.  Then, I began to notice the next layer of energy blocking.  If I took my mental attention away from my partner and the mantra, the pain in my arms would become unbearable.  So, I kept my mind in the mantra and my eyes focused in hers and found a real freedom and strength beyond my own in just linking myself with God and letting Him do the work.

I remember a White Tantric course in Washington, D.C. This was the occasion of the birthday of Guru Ram Das.  My wife and I faced each other and looked into each other’s eyes.  I could see my own reflection in her eyes and I realized that we were really a part of each other, that there was no such thing as an action that affected one of us and not the other.

Guru Ram Das, the fourth guru is known for his healing and his compassion.  I can remember praying:” Listen, Guru Ram Das, I know this is your daughter sitting before me, and we have been placed so that she is looking at me and I am in her eyes.  Why can’t you make me pure enough that I am not dirt in her eyes?  Why not make me totally pure so that what she sees is pure?”

Then the Siri Singh Sahib spoke in a low tone into the microphone, “It is said that if you wish for something on Guru Ram Das’ birthday, your wish shall be granted.”  I felt a little flutter of joy go through me.

The Siri Singh Sahib had us close our eyes and he took us on a journey to Amritsar, the home of the Golden Temple.  He described perfectly, the marble stairway that led to the walkway containing the pool of water surrounding the Temple itself.  It is an historic walk around that tank.  There is the place where Baba Deep Singh’s head fell after he miraculously threw it in the heat of battle.  There is the Akal Takhat, where the sixth Guru, Guru Hargobind, ministered to his Sikhs.  There is the tree where Baba Buddha sat and supervised the building of the tank.

And, finally, there is a spot legendarily known for its healing powers.  The legend goes like this:  A man stricken with leprosy sat on the banks of this body of water when it was not yet a tank.  It was still only a pond.  He saw a black bird hovering above the water.  Suddenly it dived into the water and reappeared, snow white.  The man himself slipped into the water and emerged clean of his disease.

When his wife returned, he went to embrace her, but she pushed him away.  She didn’t believe he was the same man, and she wanted to know where her husband had gone.  Finally, Guru Ram Das settled the dispute, saying the waters of that pond were healing.  He pointed out that one of the man’s finger’s that had not been dipped in the water was still leprous and asked him to dip that finger in the water while his wife looked on.  That finger became healed too, and the wife became convinced that her husband’s identity.

Guru Ram Das enclosed the healing waters in a tank and a Golden Temple was built in the center of the water.  Even today people stand at that spot where the leper was healed, in order to heal themselves. 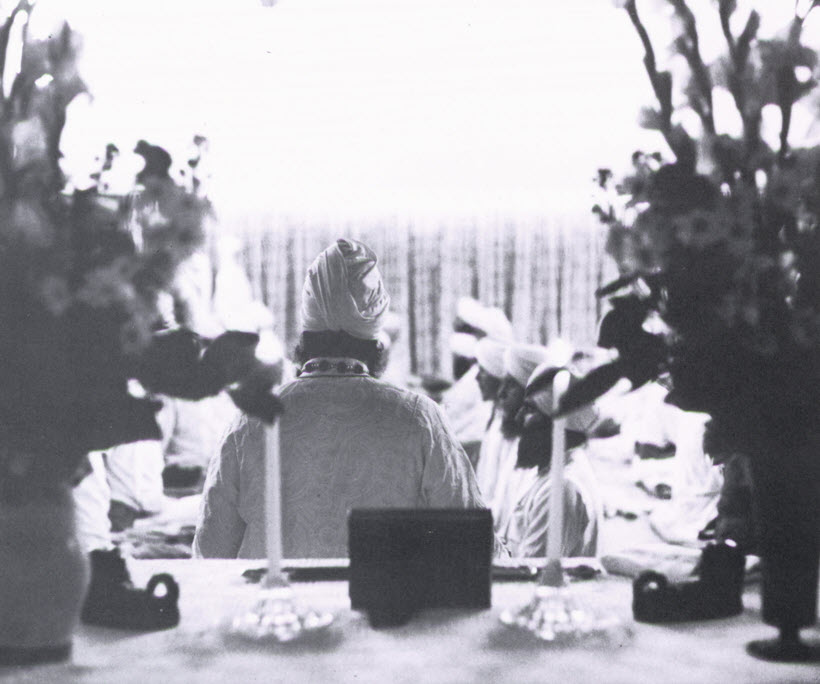 During the White Tantric exercise, it seemed as though we were actually at the Golden Temple.  Now we were hovering over the spot where the leper had been healed, and the Siri Singh Sahib said:” Imagine, your soul could come to the edge of the tank.”

Almost instantly a small, dark, lizard like creature appeared and skittered along the edge of the tank.  My mind said, “Aw come on, you’ve got to be kidding.”  Then came the instruction

“Now, let it dip in the tank built by the fourth Guru.”  With that, the little cartoon reptilian soul of mine slid into the water and emerged as a luminous rod of light, so brilliant, and so clear that when it reentered my body, I felt awed by its presence.  Its light filled my whole body.  I vowed never to betray it.

The Siri Singh Sahib had told us that the soul of a demon and the soul of a saint are the same, that all souls belong to God.  He had also told us that the worst curse is a self- curse.  What was cured in me was not my soul, but the darkness in which I had engulfed it by my own self-hatred.  For my whole life, I had never respected women for their real beauty, and now in the presence of my wife and the Mahan Tantric, my prayer to become pure for the sake of a woman had been answered.  I was in ecstasy.