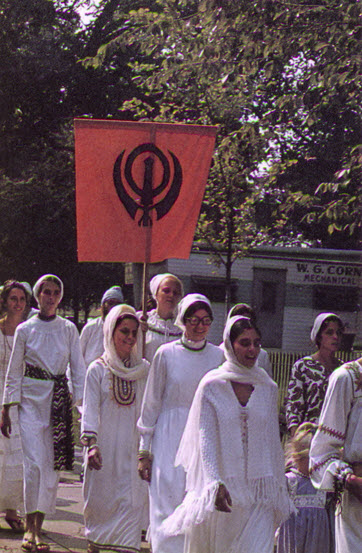 This was published on page 201 of the book, The Man Called the Siri Singh Sahib, published in 1979:

Once, a long time ago, I prayed and asked God where you came from.  Then I saw souls and souls upon this earth, gathered up in longing, forming a large concave cup.  To this simultaneous longing to belong and longing to know Truth, the universe responded.

From the depths of the midnight heavens, came a ray of light, tiny at first, but growing in size and brilliance as the particles of light gathered and grew closer.  For a moment, the molecules of light held themselves in a sphere; then slowly, the mass began to take form.  The form became your image.

I know that as you came, so shall you depart, and that no day on this earth can give you happiness.  But your birth has brought hope and light to those souls who were imprisoned in the darkness of ignorance for so long.  And those whose prayers you were sent to answer, the day of your birth was happy indeed. So on your Happy Birthday, it is my very small but humble prayer that God in His Mercy, may grant you a moment of absolute and painless peace.  And that no matter what the weight of this world or our shortcomings, that moment shall be your eternity.

With all the Grace of Guru Ram Das, thank you for coming.