Guru Dass Singh traveled the world, teaching and sharing his music. He trained hundreds of Kundalini Yoga teachers in courses he led in different countries. Guru Dass was a long-time, and a highly experienced, Kundalini Yoga teacher and trainer, and one of Yogi Bhajan’s early students.  He was introduced to Kundalini Yoga as taught by Yogi Bhajan in 1969 at the Woodstock Music Festival. He was just 16 years old and came from Puerto Rico to be part of the historic event. He became a member of the Ahimsa Ashram in Washington, DC and began practicing Kundalini Yoga in the early 1970s, working “long shifts” at the Golden Temple Restaurant in Washington DC, along with his fellow ashramites.

He was a passionate and heartfelt musician and was a member of the Khalsa String Band.  Guru Dass was the youngest member of the group and wrote and sang many of their songs.    Yogi Bhajan said that when he heard his music, it was so arresting that his mala stopped.  Guru Dass’s music has opened hearts and touched the souls of thousands of people around the world.

He was ordained as a Sikh Dharma Minister in 1976 and moved to Spain at the Siri Singh Sahib’s request in 1978. He studied to become a chiropractor and was part of the Khalsa Chiropractic Association, receiving hands-on training in healing from the Siri Singh Sahib.

He departed this earthly abode in 2017. His love and dedication to Sikh Dharma was such that, even while knowing he was in the last stages of cancer, he traveled to Bali to teach and inspire the international group of students.  He is the father of Nirankar Singh and Simran Simrat Kaur, and the grandfather of Forest.

As part of our 3HO/Sikh Dharma culture, music has been such an important part of opening our hearts and connecting to the Divine in a unique and special way.  Guru Dass Singh composed and sung many of the songs that are part of who we are as a community.  They share the experience of many who adopted the Sikh faith when they were teenagers and were listened to and sung by our children as they grew up.  We are forever grateful for the blessing of his music.

Here are some articles of some of his friends, who fondly remember him.

If you watched Woodstock, the 1970 documentary movie, you probably remember the scene where, in between band sets, a long-hair hippie is up on the stage leading everybody in Breath of Fire. What you probably didn’t notice is partway through the exercise, in the crowd in the right-hand corner, a little head pops up in the crowd to see what’s going on.

Next time look closely and you’ll witness a 16-year old Guru Dass Singh getting his first introduction to Kundalini Yoga. He, of course, hadn’t taken the name Guru Dass at the time. He had convinced his parents to allow him and his 17-year-old best friend (the future Gian Singh) to fly from Puerto Rico to New York to participate in a “summer music camp.”

It wasn’t until a couple of years later, as a student at the Berklee College of Music in Boston, that he started to practice Kundalini Yoga. He soon left the College and joined the Ahimsa Ashram in Washington, D.C., sleeping in the notorious “men’s dorm” and working long shifts at the Golden Temple Restaurant.

That early ashram life was beautifully captured in the song “Keep Up” by the Khalsa String Band. That wonderful band was composed of the finest musicians of early  3HO,  and Guru Dass Singh was the youngest member. He wrote and sang many of their songs and had incredible stories of “life on the road” as they toured the country playing college campuses, sometimes as the opening act for  Yogi Bhajan’s  class.

The music they created together was truly magical. It told our story in song and bound us together as family. Every new cassette tape recording was an event, awaited with great expectation. I remember exactly where I was when I first heard Guru Dass sing “Flowers in the Rain,” and I remember it made me cry. He went on to write and sing so many songs that chronicled the growth and journey of 3HO such as, “When Will I Walk on the Cold Marble Again,” “The Ballad of Guru Ram Das,” “I Am – I Am,” and so many more.

In 1978 Guru Dass Singh and Kaur moved to Europe at  Yogi Bhajan’s  bequest, and founded the Guru Ram Das Ashram in Barcelona, Spain. The ashram was on the top floor of a beautiful old apartment building, with no elevator, and exactly 108 steps to climb to reach their door! Barcelona was one of the seven original ashrams which brought Kundalini Yoga as taught by Yogi Bhajan© to Europe. Guru Dass established Kundalini Yoga in Spain and contributed to the growth of 3HO throughout Europe.

Early on, looking for a way to support his family, Guru Dass Singh asked  Yogi Bhajan  if he could return to the U.S.A. for two years to attend chiropractic school. In typical style,  Yogi Bhajan  gave him six months, and Guru Dass used the time for a “crash course” with Wha Guru Singh, learning at his clinic. He then returned and established a successful chiropractic clinic and a school that taught the first generation of chiropractors in Spain. During their years in Spain, Guru Dass Singh and Kaur produced many of the beautiful CDs that are still known and loved around the world today.

In the early 2000’s they felt they had completed their mission in Spain and asked Yogi Bhajan if they could return to the U.SA. Yogi Bhajan gave them his blessings to move, and gave Gurudass Singh the hukam to become a traveling Yogi, spreading the teachings around the globe. He went on to live in Santiago, Chile and established KRI Teacher Training programs in many South American countries.

Guru Dass later returned to Europe where he met and married Raj Kiran Kaur and moved to her native Sweden. From his home near Gothenburg, he continued to travel the globe to spread his love and light, share his music, and train teachers. He was one of the original five KRI Level One and Level Two Lead Trainers personally appointed by Yogi Bhajan to teach the KRI Aquarian Teacher Training program in Europe.

He was one the original members of the Aquarian Trainer Academy and a founding member of the KRI Teacher Training Executive Council. He personally trained hundreds of KRI certified Kundalini Teachers across the globe with programs in Spain, Chile, Brazil, Paraguay, Peru, Sweden, Australia, India, U.SA., France, and Bali.

His love and dedication to the Teachings was such that, even while knowing he was in the last stages of cancer, he traveled to Bali to teach and inspire the international group of students who attended the Level One immersion he had organized there, as well as comfort and support the core group of trainers he was mentoring in the Academy.

In his last weeks on this earth he was blessed to be surrounded by his children, Nirankar Singh and Simran Simrit Kaur (Simi), and his grandson Forest. As he moved into his last days I was able to reach him by FaceTime on several occasions. Every time he greeted me with his smile, which shined with the radiance of the brilliant light within. He was sad to leave his family, friends, and students, but he was unafraid to pass on to whatever waits for us on the other side.

His timing was impeccable, leaving his body as his 3HO family was gathered together for  Summer Solstice  where we could grieve his loss together. We celebrated his life and remembered all that he gave to us as we listened together to joyous and inspiring music which, as his song says, “…will live forever in our hearts…” and inspire generations to come.

As shared from the Fall 2017 SDI Minister Newsletter

S.S. Guru Dass Singh Khalsa was introduced to Kundalini Yoga as taught by Yogi Bhajan in 1969 at the Woodstock Music Festival. He was just 16 years old and came from Puerto Rico to be part of the historic event.

He became a member of the Ahimsa Ashram and began practicing Kundalini Yoga in the early 1970s, working “long shifts” at the Golden Temple Restaurant in Washington DC, along with his fellow ashramites.

He was a member of the  Khalsa String Band , composed of “the finest musicians of early 3HO” (according to a wonderful article by  S.S. Tarn Taran Singh ). Guru Dass was the youngest member of the group and wrote and sang many of their songs.

He was ordained as a Sikh Dharma Minister in 1976 and moved to Spain at the  Siri Singh Sahib’s  request in 1978. He studied to become a chiropractor and was part of the Khalsa Chiropractic Association, receiving hands-on training in healing from the Siri Singh Sahib.

Singh Sahib Guru Dass Singh, my beloved brother and fellow Minister in Divine, was a total gift from  Guru Ram Das Ji . I met him in January 1973 at Ahimsa Ashram in Washington D.C., where we lived, worked, played guitars, and sang together.

I can’t tell you how many times during the last 45 years the  tears poured from my eyes while listening to one of his beautifully crafted, heartfelt songs of devotion and Divine love. Songs like “ Flowers in the Rain ,” “ My Hands are Empty ,” “ Ballad of Guru Ram Das ,” “Love is the Answer,” “ Never Again ,” “Ode to Guru Gobind Singh,” and countless other songs stand as remarkable testimony to his beautiful gift.

My soul instantly knew that Guru Dass Singh’s songs came directly from the Source, as I felt that no human being was capable of writing melodies and lyrics this touching, this heavenly. His music expressed the deepest, most exquisite longing for God. 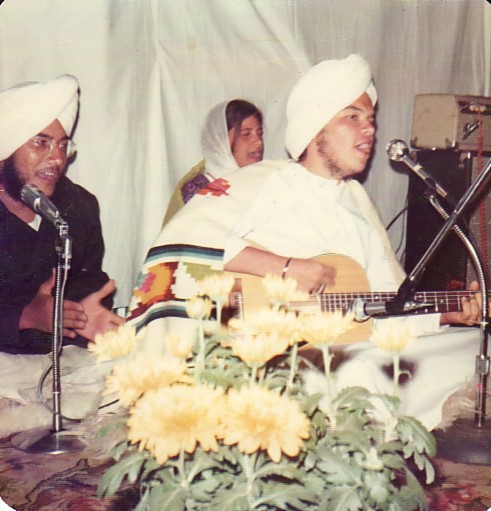 In 1999, Mata Mandir Kaur and I had the distinct privilege and pleasure of traveling to Barcelona, Spain to record the album “ Train to Amritsar ” with Guru Dass Singh and his magnificent wife, Guru Dass Kaur. I will never forget the fun, laughter, and amazing meals the four of us shared during those two joy-filled weeks—not to mention the heart-pounding exercise we got several times daily trekking 108 steps (no elevator in that building) up to their lovely apartment.

In 2008, while  Snatam Kaur  and I were recording the album “ Liberation’s Door ,” Guru Dass Singh approached me with a new melody that he had just composed to one of  Guru Ram Das Ji’ s most beloved poems. Guru Dass told me that he heard Snatam Kaur singing it in a dream the prior night. He sang it for me and my eyes started gushing again.

Snatam Kaur loved it too and we both knew that we had to make room for it on the nearly-completed album. In my opinion,  Snatam’s performance of his song “Crimson” stands as one of the most beautiful of Snatam’s epic career. Two years later, in 2010, she and I were thrilled to sing it together with Guru Dass and his lovely daughter Simi for over 1,000 people at a concert in Santiago, Chile, where they were living at the time. 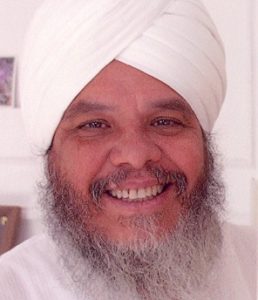 On  Peace Prayer Day  of 2017 at exactly 11am MST, I was in Espanola, preparing to go up the mountain, when I received a phone call from our dear brother, Gurutrang Singh. He could barely talk as he broken-heartedly told me that Guru Dass Singh had just left his physical body.

I thought it so fitting that his passing took place on a day when he had serenaded our 3HO/Sikh Dharma community countless times over the last 45 years. We spent the rest of that  Summer Solstice  singing his songs and sharing our memories. What an amazing musical legacy Guru Dass Singh has left for us and all of our generations to come!