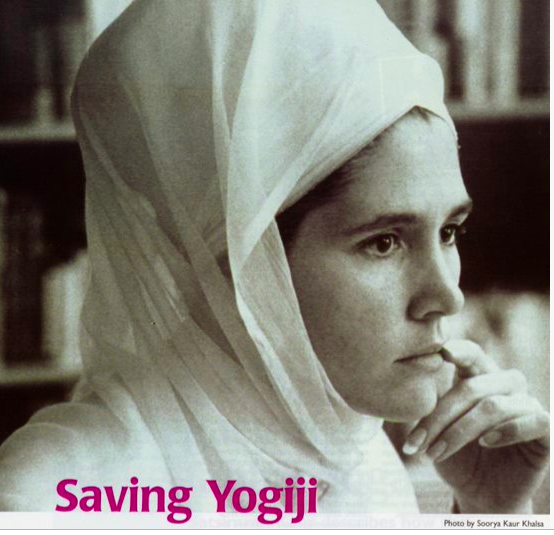 Guru Amrit Kaur had just taken a job as Yogi Bhajan’s new secretary in 1974, but in a critical moment, she became his bodyguard.  Here is an article from the Winter 2005 issue of Aquarian Times, where she reflects back to that time and tells the story in her own words:

It was my first trip to India, on duty serving as tour secretary for Yogi Bhajan. I had just come onto his staff…

Traveling with Yogi Bhajan in India was a non-stop experience. We visited one Gurdwara after another. Crowds in the East are nothing like what we’ve experienced in the West. There is no way to explain the experience of being in a space that’s standing room only, and then everyone sits down. As American Sikhs, we were the main attraction and we did our best to uplift everyone by playing kirtan. We did not know the traditional Ragas for each of the shabads, but they all loved our Western tunes and voices as we attempted to sing in a foreign language on a stage with an audience of thousands of people who had come to see what Yogi Bhajan had created in the U.S.

Then he would speak. Yogiji was amazing as he addressed the crowd in the Punjabi language. Everyone would laugh, then cry, being so moved. So even though I didn’t understand a word of Punjabi, I could tell the spirit of the sangat was high in all the Gurdwaras we visited.

All except one. It was at a Gurdwara in Delhi. Eyes glared as Yogiji spoke. Mind you, I did not understand a word, but the tension seemed to grow with each word he was saying in Punjabi. The feeling in the place was intense, thick with animosity. I became hyper-aware as Yogi Bhajan finished his talk and began to make his way to the door. I grabbed his bag and my purse and quickly followed him.

We were nearly out the doorway when all of a sudden a man wielding a sword flew above the crowd from the left and struck Yogi Bhajan on the head. Thank God for the turban and kanga (wooden comb tucked in the hair) as Yogiji was not hurt, but as soon as I heard the metal sword cracking against the kanga, all my warrior instincts erupted. It was clear we were under attack as another man jumped with his sword over the crowd on my right. But as he flew over my head, I literally caught this man and hurled him back onto the crowd.
There was panic. People wanted to run but found no room to move. I tried to secure the space around Yogi Bhajan, but the crowd was not allowing me the visual clarity I needed. Keep in mind, I am a woman who is six feet tall, and most of the crowd was around five feet. So I had  visual advantage, but in this crowded scene, I knew we weren’t secure if people that I did not know had physical access to Yogi Bhajan.

In college I had trained in the martial art of fencing. Fencing had developed my instincts to act within milliseconds, or lose the moment. So my executive mind looked for the advantage, rapidly studying the movement of the crowd, the exit points, and the space in general. As I looked around my eyes caught the eyes of another student of Yogi Bhajan, Sat Peter Singh. He was also six feet tall and thinking the same thing I was, so we reached through the crowd to lock our wrists. Then we managed to clear the area, moving the crowd back about 20 feet. With this achieved, others maintained the border of space we created and I moved back by Yogi Bhajan to provide security.

He was still trying to reach the door. Slowly the crowd moved, one by one, to exit the small doorway out into a courtyard. When we finally squeezed through the doorway, the space of the courtyard was a welcome sight. We dashed past the surging mob to the waiting cars, and jumped into the  vehicles that rushed us to the hotel. 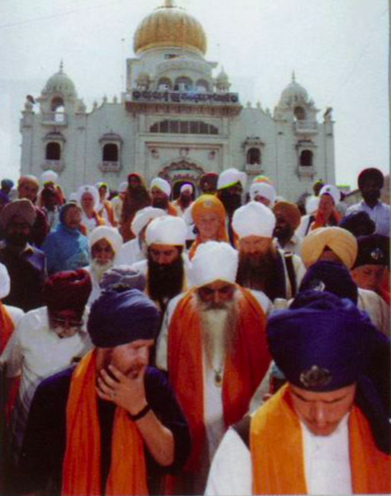 When we reached the hotel, Yogiji noticed I had a small scratch across my cheek that I had apparently received when I was tossing the attacker. For the rest of that day and into the next—as news of the ordeal spread throughout Delhi and well-wishers came to visit him—Yogiji would smile, point to my cheek, and his friends would stare at me, this unusually tall American woman who had done something they thought was truly remarkable.

But Yogi Bhajan never seemed the least bit surprised that his tour secretary—on that day—became his bodyguard. Yogiji would call it my “battle scar.” But to me, it was just a little scratch.

View this article as it originally appeared in Aquarian Times in Winter 2005 (Vol. 4, No. 4)