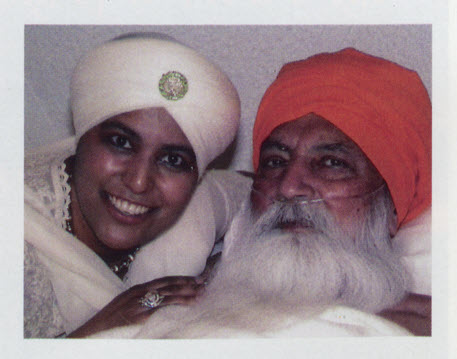 Dr. Harjot Kaur Singh served as an integral part of Siri Singh Sahib’s (Yogi Bhajan) medical team during the last years of his life.  (Here is what she wrote in the Nov/Dec 2007 Aquarian Times Magazine:

The very first time I met the Siri Singh Sahib (Yogi Bhajan), when I was 12, he told me he wanted me to do something in medicine. Then he got a faraway look in his eye, and said, “You’ll be really good as a doctor, and people from all over the world are going to come to you, and you are going to heal them. And you are going to heal me too.” After that, every time I met him-every year or so-the only thing he said to me was, “Get that MD degree.” By the grace of God, I did.

When I was in medical school, from time-to-time Yogiji would call me. Sometimes he would say, “I want you to work on this seva1 project. Put 200% of your efforts into it and don’t worry about school.” At other times he’d call and say, “For one week I want you to just study. Don’t do anything else, just study.” And I’d say, “Okay.” He would advise me like that. It was funny because a lot of my colleagues in school were failing their exams, while I wasn’t making it to all my classes, and I was passing. They used to get kind of angry with me and say, “How can this be happening?”

The first time I acted as his personal physician was in 2000 in India. I arrived in Delhi in the middle of the night, the Siri Singh Sahib ji having gotten there about 8-9 hours earlier. He had become ill, and I was called to his side early in the morning. He spent two weeks in Delhi recuperating and told me that he was getting in the habit of my being by his side every day and explaining what was going on with his health.

When we returned from India, I made sure to call him from Calgary every morning. That way I remained part of his medical team. He would tell me how his health was faring, or just talk about anything. For at least six months, I talked with him every single day, and when possible, flew down to New Mexico from Calgary on weekends to see him.

I always remain very grateful to the Guru for the opportunity to serve the Siri Singh Sahib ji-not only as a medical physician, but also by bringing comfort during difficult times. The Siri Singh Sahib ji would say to me, “You are my student, you are my doctor, you are my daughter, and a musician. And also, you are my friend.” My entire office knew that I was on call for him, and if I received a phone call from Espanola, they cancelled everything so that I could immediately leave to be with him.

He used to say, “You know, Harjot, all the sants2 know that you are the doctor to the sants. When they need you, they will find you and you will need to take care of them.  And I have found that to be true. When saintly people travel through Canada, or when I go to other countries, especially India, someone will call and ask me to take care of a saintly person and their unique sort of spiritual needs as well.

On reflection, I think what helps me to be a good physician is my spiritual practice. It provides an additional level of protection and insight. When I was with Yogiji, if he had a health crisis, a shabd3 would just come to me. As I recited it, its spiritual power lent an extra layer of protection.  Intuition is a valuable asset to a physician; the shabd helped me to know intuitively what to do. I have been told by caregivers that my presence at a patient’s bedside seems to help patients feel more relaxed and secure and that everything about their state of health seems to get a little better when I’m there. They wonder why that is. It’s totally the grace of God, but I believe it’s also the power of prayer and the power of the shabd. In short, it’s your spiritual practice as well.