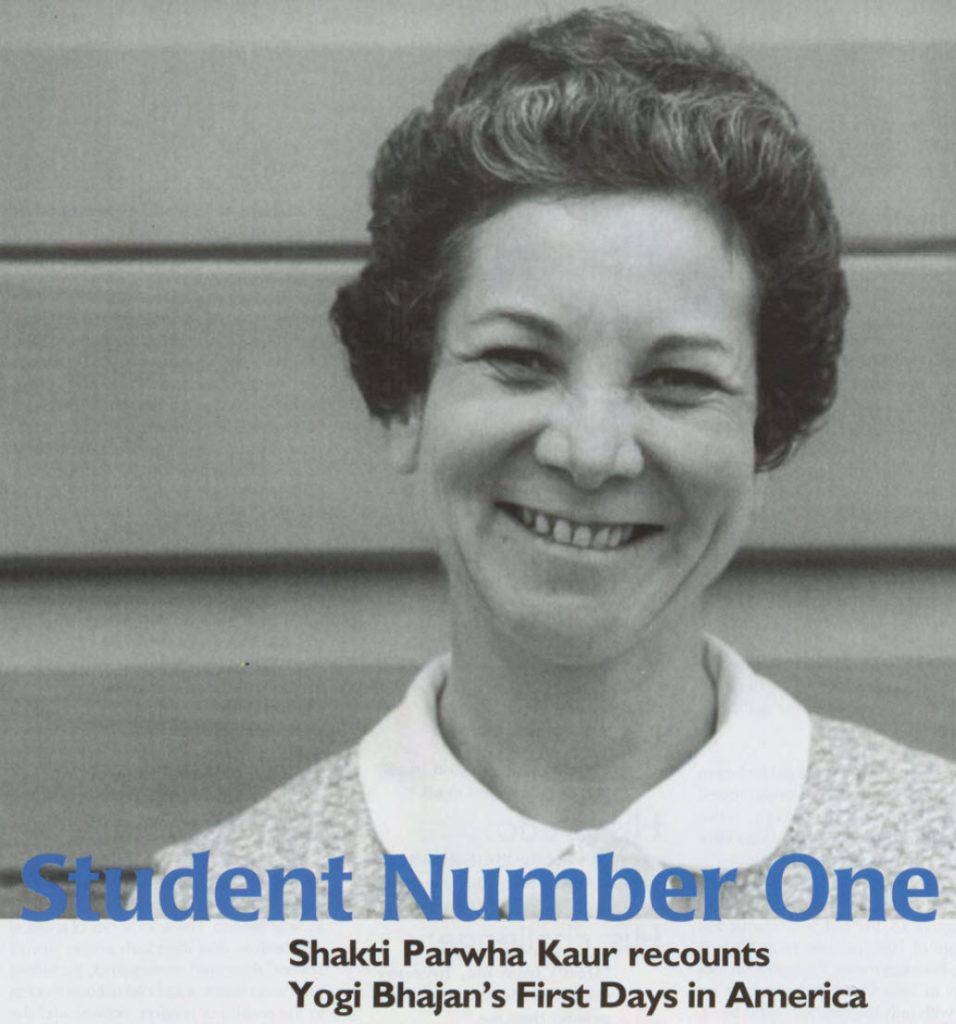 “I wanted to help this man in any way I could”.

At 39, he was strikingly handsome: over 6’ 2”, wearing white checkered trousers, a short sleeved shirt, black velvet shoes with turned up toes, a pink turban, and not a hint of gray in his jet black beard. Snapping photos with a little instamatic camera, observing every detail with his luminous brown eyes, he spoke with elegance and grace, the most polite man I’d ever met. 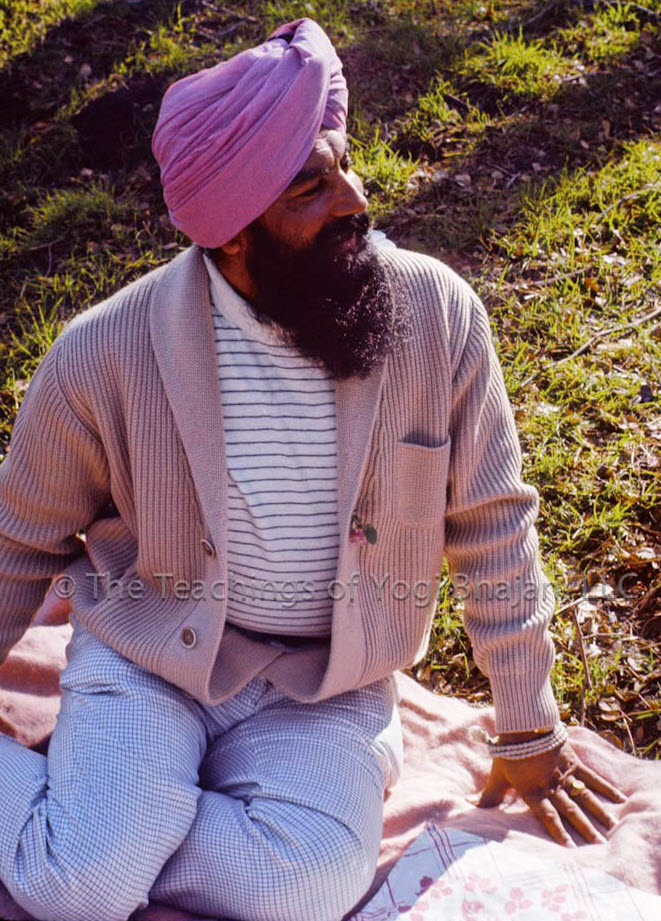 He gave his first public lecture in the United States on January 5, 1969. I had already met him two weeks earlier, in December 1968, when he visited the East West Cultural Center in Los Angeles.

Unknown in this country, virtually penniless when he arrived from Canada—his first stop on his journey from India—he had intended to spend only the weekend in L.A. However, upon meeting a number of young “flower children,” he decided to stay.

He said he wanted to give them a REAL experience of God within, to help them fulfill the destiny for which they were born. It was then that he first made that oft quoted statement, “I haven’t come to get students, but to train teachers.” 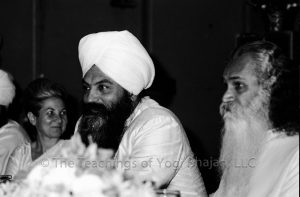 I was definitely not looking for a teacher, and had no interest in yoga. I certainly didn’t know anything about Kundalini Yoga. However, after he had told me (unsolicited) that my son was in trouble (true), and that he could help me, I started chanting Ek Ong kar Sat Nam Siri Wahe Guru at his suggestion. I did this every morning for one hour before dawn, while praying for my son. It worked. After that, I wanted to help this man in any way I could.

Yogi Bhajan and I sat on my living room floor looking through the Yellow Pages for a place where he could teach classes. A few phone calls later, an appointment was set with the Alhambra YMCA. The deal was that the Y would collect $1.50 from each student and give half to the Yogi.

In the beginning he would teach private classes as well. My first private class consisted solely of this: He asked me to lie down on the floor in Corpse Pose, breathing long and deep. And then he left the room. He didn’t come back for 45 minutes. I’ve never been the same since. 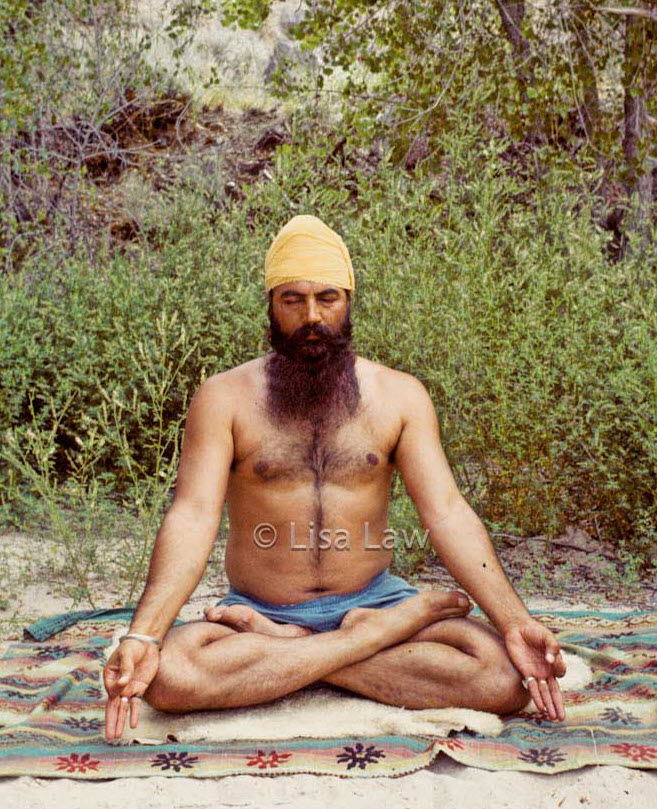 As you can see from the photos in Kundalini Postures and Poetry that were taken just before he left India, Yogi Bhajan could do all those pretzel things, but when he taught classes, he rarely ever demonstrated the postures. He would describe them, tell us what to do, and then walk around and sometimes adjust us. That was it. Once I remember trying to do wheel pose, and he tried to help me lift my back off the floor. It was hopeless. However when it came to cat/cow, which I could do, he encouraged the class by saying, “If Shakti can do it, anyone can do it.”

He would tell stories to make us laugh, others to illustrate courage, valor, humility; inspire us with tales of the Sikh Gurus, seriously reminding us of the purpose of life; and then make us laugh again.

Soon enough, his classes were inundated with longhaired hippies—piling in by the Volkswagen busload—who came to get high on Kundalini Yoga. It was too much for the woman who owned the Center, and Yogi Bhajan was asked to leave. In fact, she even withdrew her offer to sponsor him for U.S. citizenship. That morning he asked me to pray, and told me that by the end of the day, with Guru’s grace, he would find a new sponsor. Sure enough, Johnny Rivers, the rock star, volunteered . 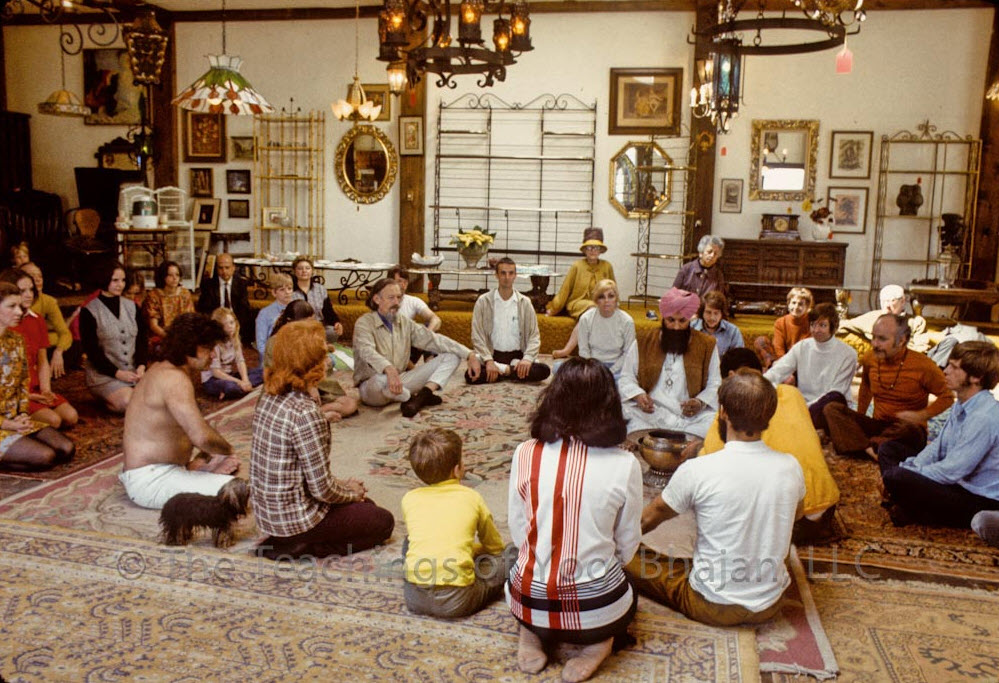 One of the students at the Y, Jules Buccieri, owned an antique furniture shop at Melrose and Robertson in Los Angeles. He offered his showroom as a classroom. Every night at six, the kids would take all the furniture out onto the parking lot and then, after the class, put it back in. Soon they decided to remodel the garage into a permanent classroom. Someone brought a gong. And at the end of every class, Yogiji would play the gong and we would sail into the bliss. (Some of us snored, me included.) There were usually about 80 students in every class. Then he started teaching mornings as well, at 10:30.

The Hollywood crowd got wind of this phenomenal yogi, and soon some started showing up with their personal assistants to spread out their sheepskins. They disappeared rapidly after Yogi Bhajan extolled the virtues of garlic, and suggested that everyone eat several cloves per day. During his “garlic period,” he started traveling and teaching. While he was away, I taught his evening classes, where I made the mistake of telling everyone to “exhale powerfully.” I nearly fell off the teacher’s bench.

You may wonder why people so readily took Yogi Bhajan’s teachings to heart, why they were willing to follow his directions, to serve him, to change their lives, become vegetarians, stop drinking and smoking. Remember, it was literally the dawning of the Aquarian Age, and the souls who were drawn to this spiritual teacher simply recognized him as a real messenger of the Truth they had been seeking. And, most of all he gave everyone unconditional love. He’s aptly been called the “Father of the Woodstock Nation.”

Sitting one afternoon on the sofa in my apartment on Westgate, Yogi Bhajan suddenly closed his eyes, and seemed to go into deep meditation. A couple of minutes passed and then the phone rang. It was Tom Law, his student-teacher, calling from Woodstock to get help, because someone had laced the drinking water with LSD.

I was privileged to spend many hours with the spiritual giant known as Yogi Bhajan (later known as the Siri Singh Sahib), listening to him counsel people, driving him to his classes, seeing him always serving, always giving, inspiring and challenging everyone to excel. In any and every circumstance he was, above all, a Teacher.

It was many years later that he shared with us the oath that we Kundalini teachers now take at the end of our training. But it’s an oath that he himself has always lived by: “I’m not a woman, I’m not a man, I’m not a person, I’m not myself, I’m a Teacher.”

Shakti was Yogi Bhajan’s first student in the United States and has been teaching Kundalini Yoga since 1969. She produced the 3HO Newsletter, The Science of Keeping Up, for over 30 years. Ordained a minister of Sikh Dharma in 1973, she lives in Los Angeles, California.  She is the author of Kundalini Yoga: The Flow of Eternal Power, Tool Kit for Teaching Beginners,and Kundalini Postures and Poetry, and Marriage on the Spiritual Path.

This article originally was published in the 2005 Winter issue of Aquarian Times – the first issue published after Yogi Bhajan left his physical body.

Here is the original article:  Student number one – from 2005 Winter AT