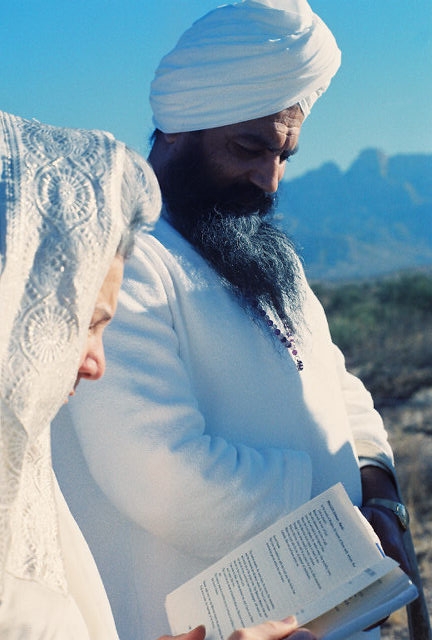 This article appeared in the Spring 1980 Beads of Truth Magazine.

Sat Nam and warm greetings from Guru Ram Das Ashram in Portland where we are still experiencing the ecstasy of the Siri Singh Sahib’s re­cent visit and Tantric course.  Of all the Tantric & Kundalini Yoga I’ve had the blessing to do, none has ever given as powerful a result in as short a time, and I believe this was true in a general sense for many people, not just myself. Wahe Guru!

I want to mention a recent, interesting “coincidence” between something that came from you and something that came to me. Several weeks ago, I was talking to a student here and he was saying something to the effect that he wasn’t ready for 3HO, as he was into Meher Baba. I spoke with him for a while about this, attempting to draw parallels between the Siri Singh Sahib’s teachings and Meher Baba’s, etc. and the conversation eventually ended.

A couple of days later I got a very strong urge to obtain and read the book “Meetings with Remarkable Men”. I had never read a word by either Ouspensky or Gurdjieff and hadn’t even heard them mentioned in my presence in probably eight or nine years, and yet this pull was strong.   I put the feeling down, but it kept surfacing over the next couple of weeks in various guises and finally I got a copy of “In Search of the Miraculous” by Ouspensky. Concurrent with reading this book over the next few days I underwent some very beautiful spiritual changes and rediscovered more about myself, our dharma, the Siri Singh Sahib, etc. than I had in many years. I went on to read “Meetings with Remarkable Men” and “Tertium Organum” and am still full of the parallels to Siri Singh Sahib’s teaching. It was only after I had read the first book that I read in your letter the suggestion to read this material and I was struck by the coincidence of it.

After reading through the Commemorative Volume (The Man Called the Siri Singh Sahib), I began to write down all the personal experiences I could remember having with the Siri Singh Sahib. During this time, I realized the blessing I was receiving in remembering the sublime ecstasy of many of those moments.  Even now, if I but close my eyes and meditate on or recall these moments, I am washed with bliss and experience a great feeling of humility and gratitude in the face of this blessing.

The part of this that I am now particularly aware of is that these past moments are never past. They are always right here if we only have the consciousness to perceive it. In this light, it is notable that a tremendous portion of the ardaas is concerned with remembrance. I have seen how this whole idea of remembrance has laced itself in and out of my life over the years and how in my dark moments I could not remember any of these experiences. I recall so distinctly how when a couple of years ago I called you and said that I was leaving 3HO you asked, “Why did you come onto this path?”, and I replied, “I have no idea, I can’t remember”.  Thank God this vision has been given to me and may it never leave.