Home › Experiences › Our Stories › Tales of Yogiji: At the Instant of Death 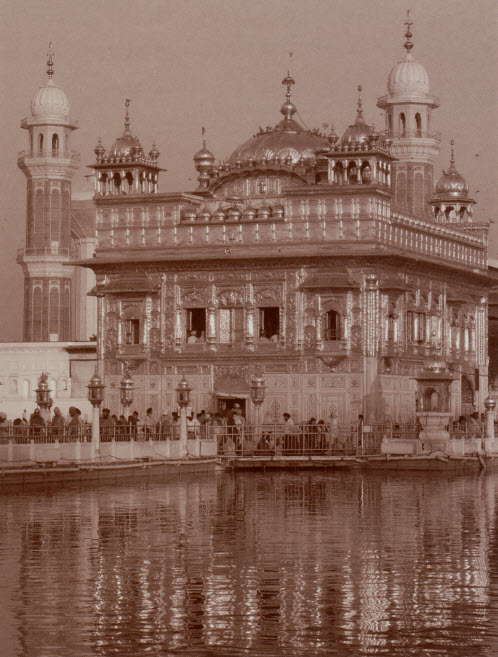 This story is based on the experiences of Gurucharan Kaur Khalsa from Massachusetts and published in the Fall, 2003 Aquarian Times Magazine:

Early in 1974, I was lying in a bed in the city of Amritsar, home of the most sacred of the Sikh temples, Harimandir Sahib, the Golden Temple. I remember the room, built of cement, painted white, with a single light bulb and a ceiling fan. The sounds of the city and the temple were everywhere. It was cool. I had come to Amritsar to be healed. There was sadness, pain and sickness in my heart.

Immediately upon arrival, I had fallen ill with a fever and infection. Each day, I felt worse and worse, growing progressively weaker. As I lay in that bed, nearly helpless, I felt that I could not take it anymore. So, I surrendered. I chose to die.

The healing power of the Harimandir is legendary. The site was chosen by Guru Ram Das for its power of healing. The story of its founding tells the tale of a devoted wife whose husband so suffered from leprosy that he could only be carried in a basket on her back. One day on their travels, she left him by the side of a pool of water and continued on into the city to find food and medicine. While waiting for his wife, the man observed a crow dive into the waters, and emerge as a white dove. Inspired, he tumbled out of his basket, and crawled toward the water. He lowered himself in, gripping a low hanging branch of a tree to keep from drowning. Saying a prayer, he immersed himself.

He was healed. His body was completely whole, except for the hand that had gripped the branch. Upon returning, the wife discovered a handsome man in the rags of her husband. She assumed that this stranger had attacked her husband and stolen his rags. She fought with him and only when he showed the hand that still had leprosy, did she believe the miracle. He then dipped his hand in the pool and was made whole. The pool of water became the tank that surrounds the temple. Millions have journeyed to the Golden Temple to bathe in its healing waters. It was this power of healing that drew me to India, to Amritsar, to the Golden Temple, and I was dying.

I was lying in that bed, feeling a great tiredness, feeling complete. I consciously entered a state of deep meditation and began the process of letting go. I felt a gradual sense of motion, and as I released myself, that motion increased. It was a steady acceleration, increasingly faster and lighter, drawing me out into a vast expanse of lightness and clouds. I felt so free. Abruptly, the motion ceased.

Instinctively, I knew the Journey was not complete. It was as though the elevator had stopped before it reached my floor. Out of the corner of my eye, Yogiji appeared, moving directly towards me. He was not hurried, and after a few moments stood directly in front of me. The full power of his penetrating gaze was on me, “What are you doing?”

I remember feeling unsurprised to see him, more annoyed than anything else. He looked into me, and that question, “What are you doing?” hung between us, a moment of lifetimes.

When I was two years old, my puppy died. When I asked my mother where he went, she answered, “Puppy heaven. ” One week later, my father died in an accident. When I asked my mother where he went, she answered, “Heaven.” As a two-year-old girl, I only wanted to know one thing: the way to heaven. Both of my favorite things in the world had gone there, and I just wanted to know how to find them. Growing up was not easy, and the challenges of growing up without my father left me hurt and sad. The only thing I trusted in was the power of my prayers. Prayers led me to 3HO, to my husband, and to my teacher, Yogi Bhajan. Now, here we were, on the border of earth and heaven, Yogiji looking into me, and that question unanswered, “What are you doing?″

My answer was, ‘I’m leaving; you’ll find a better wife for my husband. I’m complete. I am going to die.” Yogiji looked at me, saw the power of my choice, and disappeared. I felt the acceleration resume, and white clouds billowed around as the journey continued.

Again, the movement ceased. Yogiji reappeared, but he was not alone. My husband also appeared, and this conversation was between us, as husband and wife.

“What are you doing/”

‘Tm finished. I am going to go and be with God. Yogiji will find a better wife for you. Let me go.”

“No. I will not let you go. It’s not complete; you promised me a son. You cannot go without delivering.”

His words struck the core of my identity and my insecurity. I could not make the promise to give him a child in this lifetime. It was medically impossible. Still, hearing those words in that place, I knew that the promise had been made in another realm, another time and space, and I felt the power of the word. I knew that my karmic debt had to be paid. I looked at Yogiji and said, “Okay.”

Immediately, I felt myself going down, returning to the heaviness and darkness of my body. Although I felt the loss of the lightness and the motion toward the beyond, it felt right. I recovered from my illness and returned home to the United States.

Upon my return, I shared the story with my husband. He described that at the same time I was having my experience, he was overcome with a deep sense of love and longing and felt pulled out of his body. As he returned, he created a beautiful poem. In that deep space of love and commitment, and by the power of prayer, together we were blessed to become the parents of a beautiful son, whose name, as given by Yogiji, is Harimandir Singh.

Later on, in a yoga class, when I heard Yogiji explain that at the moment of death, your spiritual teacher will be there with you, I was not surprised. I had the experience before the information. It is in the power of the teacher to deliver the what, where and when that each student needs to achieve their destiny. Even as hundreds of us sit in a class taught by the master, the personal experience is not lost. Each one hears those words as they are meant for us as individuals. It is in this personal universal message of the teacher that we hear the truth of our identity, and even in the moment of death, we are not lost, not forgotten, not without a path toward our higher consciousness.

Home › Experiences › Our Stories › Tales of Yogiji: At the Instant of Death