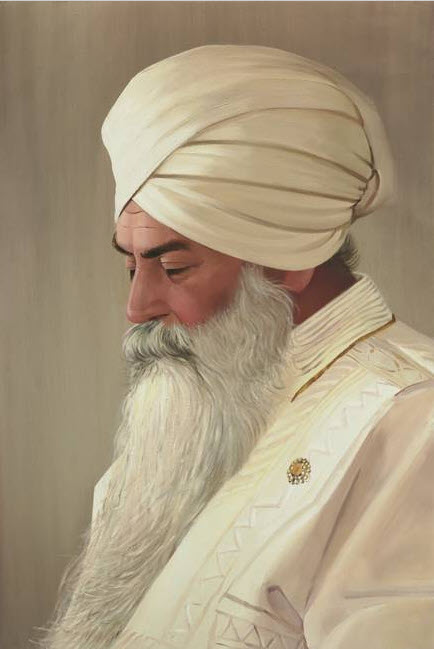 From page 102 of the book, The Man Called the Siri Singh Sahib, published in 1979 and written by M.S.S.Vikram Singh Khalsa San Diego, California, USA

Some of the most inspiring encounters that I have had with the Siri Singh Sahib, were on occasions when his physical self was many, many miles away.  Normally, as Sikhs, we do not relate to what are commonly known as “miracles”, and yet, these experiences had such an effect on my consciousness, that I have to relate the circumstances.

At the beginning of 1972, when I was teaching in London, I entered that stage known as “Shaketee Pad”.  My sadhana slipped, my environment became totally negative, and finally one night, I decided to leave 3HO.

The next morning, I awoke, feeling the relief, that only those who have totally copped out, can know.  Later on that morning, there was a knock at the door of the ashram. It was a middle-aged man, a very typical Englishman, who had taken classes from me previously, but whom I had not seen for six months.

He asked me if I would talk to him and we went into my room and sat down.  His first words were, “I’ve been meditating on you guv’nor, (an English expression meaning boss or chief) for some time now, and I’ve made contact with him on the astral plane.  As I was driving to work this morning, his face appeared on the windshield of my car, and I knew I had to come and talk to you.”

I was surprised, to say the least.   He then went on, “You cannot leave.  The future of yoga in England depends upon your staying.  You have no choice in the matter.”

Immediately, my relief disappeared, and the pain came back, but I resolved to stick it out.  By that Grace, I am whatever I am today.

Three years later, in Northern California, I was asleep one night.  In my sleep, Siri Singh Sahib ji, came to me and told me that we were going somewhere together.  He then embraced me, and I experienced the most ecstatic feeling in my total self, that I have ever known.  We journeyed through time and space, and came to the place where all the saints, sages, heroes, and the martyrs of the Sikh Dharma reside.  I could feel the presence of many men and women, who had previously been just names in the pages of books. The vibration was pure, the mood was ecstatically devotional, and my mind was in a totally blissful state of peace.

The Siri Singh Sahib turned to me and asked, “Do you like it here?”  I nodded my head.  “You can come here anytime you like.  All you have to do is lose your ego.”  And the dream ended.

God has blessed me with other experiences like this, but perhaps it is not wise to dwell on this side of the Siri Singh Sahib.  The real miracles are very visible and tangible.  They walk around, and call themselves Singh and Kaur, and all carry the last name of Khalsa.

How can one insignificant man every hope to express his thanks, for so much that has been given, with the Siri Singh Sahib as the channel for these great gifts from God.