In this article from the winter 2005 Aquarian Times Magazine, Nirvair Singh recalls the day Yogi Bhajan sent him to Alaska.

This is how I became a “certified” yoga teacher:

One day, over thirty years ago, Yogi Bhajan sent my wife and me to Alaska.

Nirvair Kaur and I were living in the Guru Ram Das Ashram in Eugene, Oregon when Yogi Bhajan came for one of his visits, which were always charged with high excitement, non-stop teaching, divine counseling, and unpredictable changes for people. I distinctly remember Sardarni Premka Kaur (the editor of “Peace Lagoon”) greeting me in  the hallway of the ashram while we waited to see Yogiji, having no idea what lay in store for us.  She smiled playfully: “You will like the air, it is very pure and clean.”

I remember thinking, “What air? Where? Are we being sent out?”

Shortly thereafter, we had our interview with Yogiji.  He had been to Alaska on an extended lay-over the year before, and had taught a couple of successful classes.  In order to continue his work, he wanted someone to open an Ashram and pioneer the teachings of Kundalini Yoga and the 3HO lifestyle in Alaska.  That someone was me. He concluded by  saying, “You  will be a great man, a very great man, if you stick with your foundation.”

Without hesitation, we said, “Yes, Sir.” We considered this a Divinely appointed mission.  I remember feeling spotlighted, slightly shaken, and filled with energy.  However, after the initial excitement, the reality of moving out of our cozy situation to a place very far away, was daunting.  The Eugene Ashram was a hard place to leave. 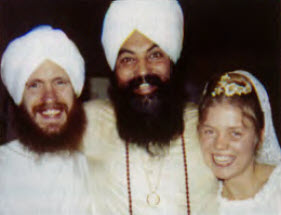 But in the seventies, that’s how it was.  Yogiji sent many people out to establish Ashrams and teach Kundalini Yoga in faraway places.  It was really a bold move on his part.  Instead of consolidating students and teachers in one place, like many contemporary spiritual teachers, he wanted to have his teachings available throughout the world.  The result is evident today.  3HO is a truly global family.

We arrived in Anchorage, not knowing anyone, with virtually no money and with Nirvair Kaur six months pregnant.  Upon arriving, we decided to do a forty-day sadhana*.  We did two and one half hours of the Morning Chant, Ek Ong Kar Sat Nam Siri Wahe Guru.  Before those forty days were over, we had been given a place to stay, a business, and I had a Kundalini Yoga teaching position at the University of Alaska.

Our trip to Alaska has turned into one of Yogiji’s favorite teaching examples.  The lecture titled “The Golden Chain of Teachers,” August I, 1996, from The Masters Touch, outlines our story, one that he’s told many times.  “If you would have asked me ten or twenty years ago to teach a Teachers Course, I would have refused.  Rather I would have said,’ We’ll teach a class, and Teachers will come out of it’.  Now we are certifying teachers and doing all that. But in the old days, I used to pick people in the class and say, ‘Okay, you two, go to Alaska.  You two, go to such-and-such a place.’  And they became Teachers.”

After we reached Alaska, I received a certification letter for teaching Kundalini Yoga from 3HO Foundation signed by Shakti Parwha Kaur. There was no formal certification at the time, but I needed a document for my employment at the University of Alaska.  However, we were already “certified” to teach Kundalini Yoga by the Master’s touch.

Nirvair Singh’s bio as shared in this 2005 article:

Nirvair Singh Khalsa has studied with Yogi Bhajan for thirty-three years and has taught accredited Kundalini Yoga classes at the University of Alaska for twenty-nine years.  He has authored four books and twenty DVD/ videos.  He co-directs the Kundalini Yoga Center of Alaska.