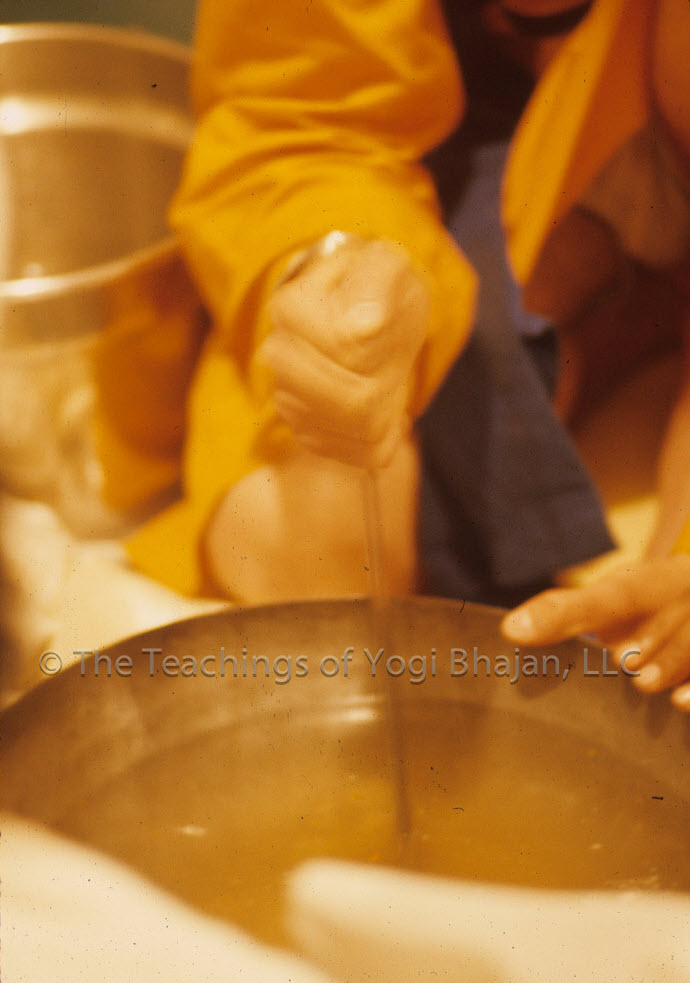 This poem is from page 196-199 of the book “Furmaan Khalsa: Poems to Live By” by Siri Singh Sahib Bhai Sahib Harbhajan Khalsa Yogiji, published in 1987.

Through the pure essence of water,
Our Father,
We come face to face
With Reality.

With the breath of life,
The five Banis are sung.
The Five Beloved Ones return again and again
To bring each Sikh
Into the presence
Of the Guru.

The Do’s and Don’ts are made known.
Each Beloved, purified,
Takes the support of the Eternal Khanda.
The Khanda rotates…
The Banis are sung…
Every Beloved meditates
Focused on the Guru,
Merging
In the Guru’s Light.

The Power of Gurbani, the essence of Virtue,
Is distilled into Amrit.

A radiant virgin
Or a chaste and prayerful wife
A woman of God,
Already baptised in the Amrit,
Makes herself ready.

Prayerfully,
By Guru’s Grace,
She puts in the sugarcakes.

Dissolving
In the Glory of the Inner Light,
Bathed in the Undying Ray of Purity,
By Guru’s Grace …
By Guru’s Kindness …
The Amrit Bowl
Is ready!

As Amrit rains on the Crown Chakra
Take the support of the Gurmantra: WaheGuru!

As the Amrit rains in the eyes
See God’s Infinite splendor.

As every mouth drinks
Merge in the essence of Amrit.

With all your power,
Til the day you fall,
At your final hour,
And merge with Akal,
Guru Gobind Ji has taken you as his son or daughter,
To be called Singh or Kaur in the world of men.

The Guru’s Word,
Alive!
Within you.

Dying,
Through the grace of Amrit,
One lives,
Transformed.

When God is merciful
The Gursikh is blessed
To drink the Amrit.

Armed with the five Banis
And a life of Rehit
Life is Bliss!

This poem is an exact description of the Arnrit Ceremony, the nectar baptism of the Khalsa.  The Amrit Ceremony was established on the annual spring celebration of Baisakhi in 1699, when Guru Gobind Rai came before the assembled Sangat with his sword drawn and asked for volunteers to offer their heads to him. Those five Sikhs who offered their heads to him on that day were the original Punj Piare (Five Beloved Ones). The Guru prepared the Amrit (Sacred Nectar) by stirring pure water in a steel bowl with a Khanda (double edged sword) whilst reciting the powerful vibrations of the Gurbani.  The pranically charged water was then sweetened by his wife, Matajeeto, with natural sugar cakes, and each Beloved was given the Gurmantra WaheGuru! as the Sacred Amrit was sprinkled on the crowns of their heads and in their eyes, and then given to each of them to drink.

In this poem the Siri Singh Sahib goes through the entire Amrit ceremony step by step and illuminates its inner meaning. As Guru Nanak says in the final slok of the ]apji Sahib, water is the Father. The pure essence of seed energy. This pure father energy of water is placed in the stainless steel bowl {the pure receptivity of the Earth Mother) and then charged with the life force (Prana) through the Infinite creative vibratory power of the Shabd.

The five Khalsa who are serving as the Punj Piare for the ceremony, after being questioned as to their obedience to the Rehit, gather around the Amrit Bowl and fixing their gaze and concentration on the water in the bowl they recite the five Nitnem Banis while stirring the water with the steel Khanda. The steel serves as a conductor of the Pranic energy as the fixed concentration of the Puni Piare channels the energy of Guru Gobind Singh directly into the water. A pure Khalsa woman sweetens the water to give the power of the Guru’s Grace and Infinite kindness to the Amrit.

As each aspiring Khalsa is given the Gurmantra, the Amrit is sprinkled on the crown chakra to open the tenth gate bringing extreme humility and gratitude. The Amrit is then sprinkled in the eyes of each aspirant to allow the eyes to see beyond the physical realm into the Infinite realms of God’s will.

Then, as the Gurmantra continues to resound over and over, each Khalsa-to-be drinks the Amrit to establish the Infinite brotherhood and sisterhood of Khalsa as one consciousness in many bodies, beyond the power of time and space.  Each Khalsa is then given the name of Singh or Kaur to be known in the world of men and women as a son or daughter of Guru Gobind Singh.  The ceremony ends with instruction in the practice of the daily Rehit and Nitnem Banis.

Transformed by the power of the Shabd and blessed through the power of Guru Gobind Singh, each Khalsa lives beyond birth and death, in the realm of 5achkand, the dear consciousness of Reality! (Note: In Sanskrit, Mrit means death. Therefore, Amrit in addition to meaning “Nectar,” means “beyond death” and is therefore synonymous with Akal.)