Home › Experiences › Our Stories › The Divine Play of God 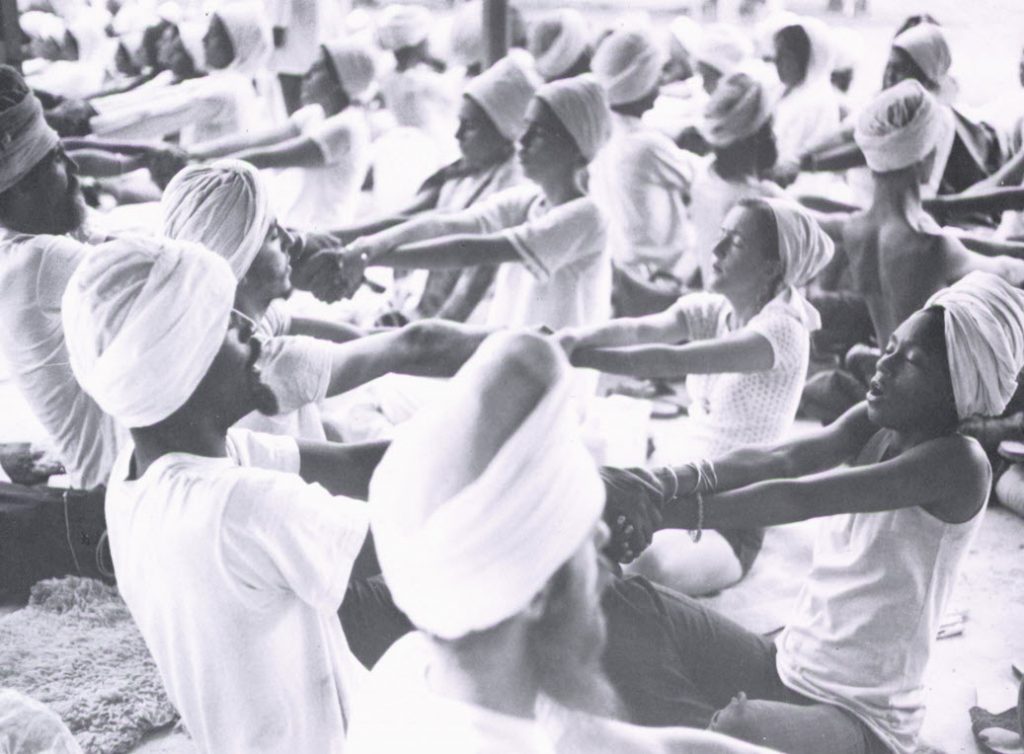 I cannot believe that I truly have been so blessed in this life to have found such a holy man!  One of the most intense moments that I can recall is that very moment in which I realized this blessing.  At that time, I had a realization that I had nothing whatsoever to fear and that no problem could overcome me because of this gift .It was a spring White Tantric Yoga course, the first one I had attended since I had made the great transition of moving into an ashram.  I was very insecure, very afraid of my future. I was leaving my past forever, for I had taken on a new name, a name which at first made me feel a deep anxiety, as I wondered if I could ever really say in confidence “I am Dev Bhajan Kaur Khalsa.”

The experience came after the very last White Tantric exercise of the course.  I had come a long way and had gone through much subconscious pain, and now felt the ecstasy of the wondrous growth process. Everyone was singing, hearts were open; it was a united family of Khalsa. I could not stop smiling, thinking of this new life of mine, until I looked up.  What I saw was the Siri Singh Sahib.

He was on the stage, almost unnoticed it seemed.  His body, which only a half hour before had been sitting tall and majestic before the crowd, was now bent over like that of an old man.  His face told of the immense pain he felt.  Two ministers were massaging his back and feet.  My elation quickly turned into a mixture of great sadness, awe, respect, gratitude, and love for this human being.  I could no longer think of myself or feel any pride for withstanding the minor growing pains I had gone through. In order for us small and feeble human beings to become closer to God in the White Tantric positions, he took on the pain of our weaknesses.  We can so easily forget him, just as we forget our Creator.  I wanted only to pray for him and thank God for him.

I sat quietly, thinking very deeply of all this, when I noticed he had gotten up to leave.  The White Tantric course was over.  I watched him walk in his powerful steady way past the line of people.  As he passed by me, I knew I was being enveloped by his aura.  He stopped and created with his face a most comical, incredible sight.  Scrunching up his nose, making his mouth round, and sticking out a long tongue, he produced a sound which I had never heard before.  An indescribable feeling took over my being.  I knew the message.  He was saying, “It’s okay.  It is all the Divine play of God.  We are only here by His will and shall inevitably make our exit from this short life.  Everything is okay.”  I knew it was true.

The Siri Singh Sahib has been to me a living example of a man who has gained control of his own life, because his life belongs not to him, but to God. His life, his being, has been perfected, and now he is here on this planet only to help carry out God’s plan, to be an instrument with which the “pure ones” can be carved.  His life was made a sacrifice, so that we too might become perfect.  He has given up everything, yet there is nothing he is without.  He is Truth, in the midst of falsehood. We have, by the Guru’s Grace, been reborn as his children, even though in the womb we were his children, and we shall travel together to the Infinite which has no end.

Home › Experiences › Our Stories › The Divine Play of God