Home › Experiences › Our Stories › The Fruits of Inner Searching 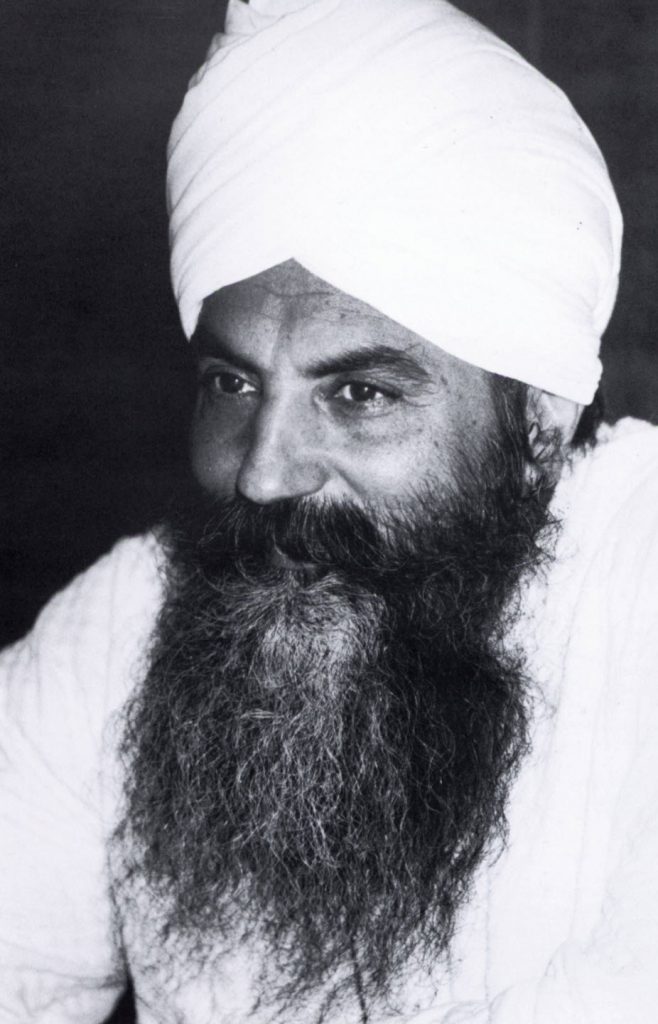 From page 44-46 of the book, The Man Called the Siri Singh Sahib, published in 1979 and written by Shamsher Singh, M.A., PhD; Division Chief, Commodities and Export Projection Division, World Bank, Washington, D.C.
May 23, 1979

India won its freedom from British rule in 1947; the same time it was dismembered.  The decision to partition the country had been made early in 1947, after the British Government acquiesced to the demands of the organized, vocal majority of the Muslims for a separate Islamic State.  The boundaries were not decided until the day of the transfer of power in August 1947, forcing the adversaries to militantly extend their claims as far as possible by pushing out the majority.  Civil disorders turned into looting, burning, rape and genocide.  Mobs ruled:  the administration had collapsed.  The casualties of the partition approached a million and about fourteen million people moved in caravans between Western Pakistan and India.  The scale of transfer of a population was unknown in history – fourteen million heartless, homeless, most penniless, landless, jobless, and honorless refugees from the Indus region.

Yogi Bhajan and myself, were teenage undergraduates at that time.  We both came from the surroundings of the town of Gujaranwala, though we had never met.  We became two of those numberless refugees.  Like a million others, both of our families wandered to safety, security and hovels in Delhi, a place completely alien to us in terms of environment and culture.  Punjab, the land of our forefathers, the cradle of our childhood and the habitat of our youth, had been left behind.

In 1948, the University of Punjab opened an evening Camp College in New Delhi, to cater to the Punjabi Students.  Neither did the Punjabi students wish to join New Delhi University, nor would they, perhaps, have been accepted.  This college for refugees, lacking premises, opened in a large high school building, which catered to upper middle class day scholars.  Camp College possessed nothing except a body (or more appropriately, bodies) of students, teachers, and classrooms.

There were hardly any offices the school could spare, there was no library, no meeting hall, no canteen, no hostel, and students had no tuition money.  Yogi Bhajan and myself were two of thousand-odd students.  Makeshift eating facilities opened quickly; the many shade trees, surrounding the school, were the place to meet and eat.  Yogi Bhajan and myself met under one of those trees.

The events of 1947 had radicalized the youth.  Defiance had become the mainspring of their attitudes towards almost everything.  We were too ill at ease to settle in classrooms.  Everything and everyone was challenged.  Window panes of the Principal, a haughty senior civil servant, were both the targets of student’s discontent.  Suddenly, we took on the Government of India, making two simple demands; tents to live in and loans to pay for college fees. We felt that since we had lost everything, we had a moral claim for necessities.  The Government, or at least the Ministry of Rehabilitation, seemed hostile to us, as did the established community.  The atmosphere became charged and highly politicized.

Every evening there would be gatherings around a makeshift stage under lush green trees in the front courtyard.  Loud speakers blared with songs and speeches.  Even those who went to the classrooms, could hardly study.  We were divided into self-styled clans and exercised informal group leadership.  These groups ultimately won the student demands that the Government establish a refugee camp.  The beautiful football grounds of the school became a hostel of tents – rows of small army tents each containing a cot and a few bare necessities.

This battle won, the attention turned towards emotional rejuvenation.  Our attention was completely diverted towards cultural activities.  We founded the Punjabi Sabha and periodically arranged symposiums under vast tents on the campus grounds.  One of the most popular songs sung was “Oh divided Punjab, Oh halved Punjab, I dream of thee, day and night, my love.”  The wounds of partition were still fresh and the hearts of everyone were still in their abandoned homes.  People wept openly as these songs were sung, as if to wash the grief out of their hearts.  Together Yogi Bhajan and I shared the jobs and ordeals of arranging these functions.

As I look back, Yogi Bhajan’s involvement in these activities and escapades, his tall, youthful figure, with barely sprouting beard, comes before my eyes.  Everyone called him “Bhaji Lamma” (Bhaji the tall”).  He was handsome, talkative and ever-present among the student groups, never a loner.  I can still visualize him in front of the college, by a tea stall, along the wide boulevard (Reading Road), standing by his bicycle, khaki clad, dagger dangling by his belt, a hockey stick on the carrier and sometimes in his hand, when he had a few books stuck on the carrier.  He seemed in a state of ever-preparedness to go on any errand, undertake any task, or assist anyone in need of help.  The needy one could be an underdog, someone who was being bullied, or someone who had a cause to expound, but not enough strength to do it.

We often traveled to the Punjab to participate in the meetings and elections of the All India Sikh Student Federation.  The journey by train involved two main problems.  Carriages were highly crowded.  Often one traveled standing on the footsteps, precariously hanging onto the outside handrails. Once in the compartment, there was a hassle, either for space or because someone was smoking.  We always demanded that there be no smoking in the compartment in which we travelled.  In these situations, Yogi Bhajan’s tall and strong physique came in handy.  He would pick up his companions one-by-one, and push them in through the compartment windows, successfully landing them on somebody or something.  He was also invariably able to stop the smokers from smoking without precipitating a fight.  So even then, he had quite an overpowering personality.

Having witnessed some gruesome events of partition, we had taken it upon ourselves to uphold the honor of the womenfolk.   The girl students saw in us brothers, ready to protect them.  We took pride in being the chosen ones with whom parents would let their daughters go on fund collection drives.

One boiling hot summer afternoon, both of us were standing in front of the College when a student friend came and informed us that a “bad character” was sitting with a girl in a curtained room of a nearby restaurant. He asked us to save the girl and so off we went on our bicycles.  We positioned ourselves in front of the restaurant.  Our informant, who in hindsight probably had his own personal grudge, went inside twice and came back to report that the couple was still having tea.  For two hours we stood there like mercenaries in the hot summer afternoon, only to discover that our prey had escaped through the kitchen.  So it was that our social roles sometimes took some comical turns, but this event also signified how bruised we had been by the rape of Punjab, and how ready we were to fight anytime, anywhere, if an appeal was made by our innermost feelings about the honor of our womenfolk.

I left India for studies abroad in 1953, carrying the memories of those few eventful years we had spent together.  In those days, we were both in search of our moorings.  I opted for education abroad, but Yogi Bhajan stayed behind to pursue his own search.  We were destined to separation for years to come, but the memories stayed fresh; warm remembrances kept us emotionally near to each other.

Then, one day, I learned that Bhajan was on the West Coast.  Soon thereafter, in the spring of 1969, he came to Washington D.C. and stayed with us   Fourteen years had passed since we met, but there seemed to be no gap.  We talked about our youthful days, but never about the years of separation, lest those events overshadow the years we had spent together.  He mentioned that he was starting a movement in the United States, to lead the youth onto the path of true living, and that he had a few followers in this area that he wanted to see.  In typical oriental fashion, I said that we’d invite them all over to an afternoon tea at our house.  My wife prepared tea for about fifteen persons, because this was the most we expected.  But as the time arrived, a most beautiful event unfolded.  Our guests, flower children, boys and girls in their teens, like we were in our days together, marched barefoot toward our house, each carrying a rose.  As they entered, they bowed with folded hands, gave the warmest smile and went in to deposit the rose in front of Yogi Bhajan and sat down on the floor.  There were so many of them.  We soon ran out of all the eatables- although theoretically one never runs out of tea.  I will always treasure this first encounter, this first rendezvous between Yogi Bhajan and his followers in Washington.  His modulated, soothing voice, his regally mannered ways, and his ability to relate to those before him were of the best I have seen in any man.

Yogi Bhajan had come a long way from his event-laden teens in India, to unfold himself before the teenagers of America in search of themselves, peace and happiness.  In the years that we had been apart, Yogi Bhajan had found his moorings. He had discovered himself.

Home › Experiences › Our Stories › The Fruits of Inner Searching