Home › Experiences › Our Stories › The Grace of God Movement 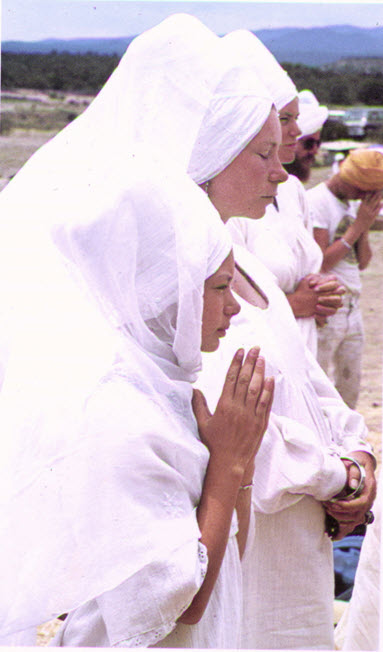 From page 204-205 of the book,The Man Called the Siri Singh Sahib, published in 1979 and written by SS Ek Ong Kar Kaur Khalsa of Los Angeles, California

In God’s great wisdom (and perhaps His supportive nature was also involved), He created a being of great light and beauty, and named this creation “human being” (“Hu” means light and “man” means mind).

He made the man the seeder of the race and created him with such a seeder’s wanderlust that, without creating his polarity as the most sophisticated of beings, human society would not be possible; so God fashioned woman of the highest caliber.

Woman is a flowing river of spirit.  On its bank dwells a male, a man.  If the flow of that river, that spirit, that woman is clean, healthy, and constant, the dweller shall not leave the dwelling.  That dwelling will turn itself into a city, a town, a capital.”

He gave her the full understanding of man, and complete knowledge of herself a woman.  She has a sensitive “woman’s system” of intuition with which to detect the merest thought of male intrusion upon her grace, and she has the intelligence to win every battle between the sexes without cost to herself.

She has the capacity to serve a man and cater to his spirit without damaging his ego.  Knowing that God lives in cozy homes, woman, it is said, can build a home with a needle and thread which man cannot destroy with a cannon.

Her sophistication is unparalleled; her inborn qualities include a purity so vast she can purify the world.  Through the force of her spirit, saints, heroes, and givers are born into the world.  Her good-humored tact can save any situation.  A man’s liberation is insured by the devotional service of a dedicated woman.

Woman is the gateway to godliness and deep within her heart every woman knows she is the Grace of God, longing to live in the purity of her own divine radiance.  Unfortunately, we live in a world that, having deliberately created the illusion that woman as God made her is insufficient, grows rich from the multimillion-dollar cosmetic-beauty industry, riding on her weary back.  Representing her as a flirt, the world she lives in has sent woman chasing down the endless avenues of fashion, reaping millions from her flight.

In gratitude, it holds her high above the rooftops in billboard splendor to sell, with her allure, everything from airline tickets and ale, to X-rated, grade Z movies.  And, as a tribute to her grace and dignity, woman is being bought and sold topless and bottomless in night-time cafes and theaters for sensory satisfaction, for seeing a woman naked.

Where does it end? For every path leading down to the depths of sorrow, a way exists back to the path of righteousness, where darkness does give way to light, and grace prevails.  But the way is difficult and the destination often hard to reach.  In His compassion, God sometimes sends a guide.

Through its special teachings, woman was given the tools to regain her self-respect.  These teachings enabled woman to emerge, quickly and easily from her ignoble past, into the radiance of her swan-nature.

By 1976 the women of GGMWA were ready to begin training themselves as a body.  Th stage for a woman’s training program had been set in the summer of 1975, when the Siri Singh Sahib had taught a two-month course under the blue skies of Espanola, New Mexico.

In July 1976, the first Khalsa Woman’s Training Camp catapulted GGMWA into its present stage of active training whereby grace is spun like a gold thread into a mantle of dignity, divinity, and ecstasy of consciousness.

Directed by the Siri Singh Sahib, Khalsa Women’s Training Camp provides the environments needed by noble women to relax into their godliness and grow in spirit, mind, and physical fitness.  It provides a focus of intelligence whereby humor and candor unlock the doors to long-forgotten kingdoms of the soul in which the meaning of life unfolds like a flower and sets the patterns of life by which God can flow into every action and fulfill the yearnings of 8.4 million existences.

Six years of special GGMWA teachings have given women the training to focus their tremendous power and creative energy and direct it to the Infinite in the true spirit of womanhood.  By His Grace in September 1977, it became GGMWW, the Grace of God Movement of the Women of the World, through the vision of its founder, Yogi Bhajan.

The work continued.  Training in self-esteem, and fearless leadership, developed new dimensions.  By 1978, 3HO Centers sponsored “survival” training seminars for women from coast to coast, opening up realms of consciousness and entering an age when women will be known as the “Grace of God”.

Home › Experiences › Our Stories › The Grace of God Movement