The Land of Miri Piri 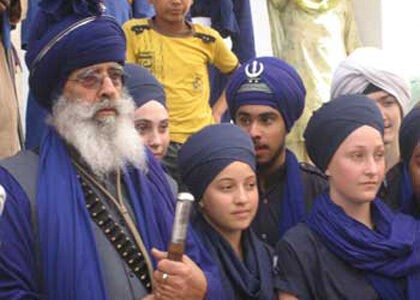 The energy of Guru Nanak passed through all of the Gurus and—while each one brings special qualities or essences into our lives—I think of a few of them more often than others. I feel the presence of Guru Nanak every morning while reading Japji and it was his Mul Mantra that led me to Sikhi.

Guru Ram Das was my Teacher’s Guru and by extension mine as well. My deepest meditations have been dipping over and over in his holy water with my heart thrown open in bliss. I gave my head to Guru Gobind Singh and he took me as his daughter. 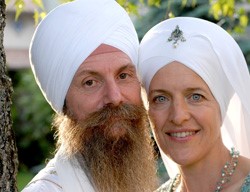 In 2008 I married Mahan Atma Singh, who worked at Miri Piri Academy. In doing so, I married into the Miri Piri Academy family. I visited Miri Piri Academy for the first time during our engagement, accompanied by the entire Khalsa Ladies Camp India Yatra. I returned to India with my husband shortly after our wedding and we created our first home together at MPA.

The staff and students of Miri Piri Academy live and breathe the life of the Warrior Saint. Forty-day seva with 40 days dipping in the sarovar of Harimander Sahib. Banis, kirtan and meditations. Running the 84 steps of Goindwal and climbing the path to Hemkunt Sahib. Gatka wars and kabbadi matches. The line between what is spiritual and what is worldly dissolves and it is one on the continuum of growth. The growth of the Khalsa. The blossoming of the spirit.

I grew as much there as any of the kids, as all staff do when they accompany the students throughout their rigorous days.  After three years I was a different woman. Stronger, braver, more deeply devoted. The energy of Guru Hargobind had seeped into my core.

When the time came for us to leave Miri Piri Academy, it was out of the blue and abrupt. We suddenly found ourselves in the US needing a home, work and a Sangat. We took up life at Hargobind Sadan in San Leandro, California. Right from the Guru’s land and into his ashram.

The Home of Guru Hargobind

While there are several Guru Ram Das Ashrams, we were in Guru Hargobind’s. It was while in his home that I took up my position on the front lines, on the units of a big city American hospital.

I’m a Chaplain Resident, and I walk as a Sikh Minister into the rooms and hearts of patients and their families. I have to be fearless and let myself rest in God’s hands and feel the light of the Guru shine through me as I accompany people through the hardest times of their lives and am called to witness their transition to death.

My lessons into the depth of Miri and Piri have increased and continue. The experiences I now have on a daily basis are possible because of this energy coursing through my veins, and the foundation created by waking each morning, once again, on Guru Hargobind’s Land.

“…Young Warriors rise and stretch their limbs.
The Khalsa Nation returns
To carry the Spirit beyond all burdens.

They bear the indelible mark
Of White Hot Steel.

Look!
In the sky…
A White Hawk is flying