Home › Experiences › Our Stories › The Legacy of White Tantric Yoga 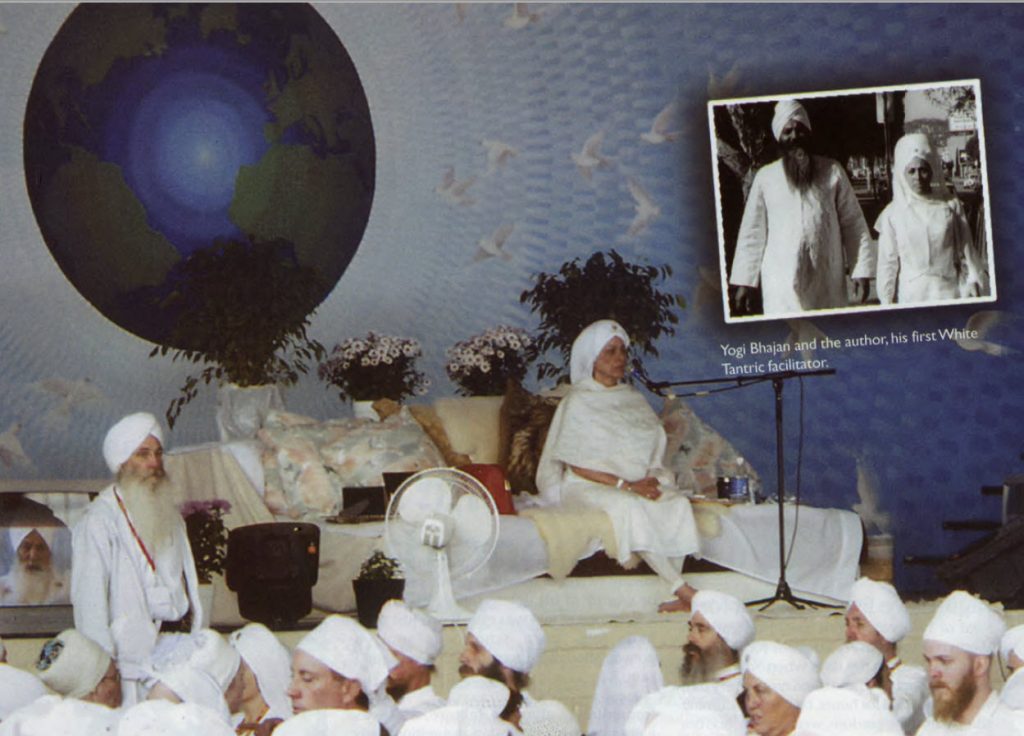 SatSimran Kaur describes how she became the first facilitator of White Tantric Yoga.

I had no idea when I sat down with my partner that summer day in 1971 that I would delve so much deeper into my essence. I could not explain it then, and can’t now, almost 33 years later.

Six months later, I was on Yogi Bhajan’s staff and began traveling with him as his tour secretary, as he masterfully guided White Tantric Yoga around the world. I sat with him,  watching as people underwent transformative experiences, they never thought possible. Sitting with Yogi Bhajan from 1971 through 1986, I was always in awe of the process-the way the Tantric energy came through him. He explained to me that although each workshop resulted in balancing all the chakras, each also gave an experience of either opening the heart center or the ajna. I recognized then and now that the experience of White Tantric Yoga, and the energy that is in the room during these times, is something very sacred, and I always feel privileged to just be there.

In 1986 after a summer of traveling to France, Spain, Sweden, Finland, and Holland, Yogi Bhajan’s stressful life began to catch up with him, and he was restricted from traveling for one year. This meant he couldn’t physically lead his White Tantric Yoga courses, and countless numbers of people wouldn’t have the opportunity to experience it. So, he figured out a way, as the Mahan Tantric, to be able to connect with students with his subtle body through the electronic media of video. At a time when he could have been putting more of his energy into healing himself, I saw how determined he was that people not miss the time and space for their own evolution into higher consciousness.

Because of my background in television, Yogi Bhajan discussed the technology with me and I helped him direct what were soon to be 126 video workshops.

But there was one more element to the new courses that Yogi Bhajan deemed necessary. Because he would now be appearing on the video screen rather than physically, he declared that there must be a ” facilitator”: someone who could monitor the participants and mediate the energy in the room.

When he told me that I was the person he’d chosen for that first White Tantric Yoga video course in Virginia, I had no idea what to expect. I must admit, I was skeptical at first. Would people really have an experience without his presence? What would I do, sitting there?  Yogi Bhajan told me not to block anything that came into my mind, and to know that he was doing the work through his subtle body.  Just relax, he said. He drew a diagram for me about how White Tantric Yoga worked when he was present, and how it would work now (if only I had saved that diagram!). He explained that before, he directly connected the White Tantric energy to each participant. Now the energy would go to them directly, because of the connection between the facilitator, the video, and his subtle body. He said the videos would be effective, even after he left his physical body.

My skepticism evaporated as soon as I witnessed the process.  It was as if he was right there in the room. Just as before, I saw passion turn to compassion; I saw fear relax; I watched angry faces turn serene. Of course, for those of us who participated in the days when Yogi Bhajan was present, we miss his charismatic personality.  But his mastery as the Mahan Tantric allows those who participate in the video workshops now to achieve the same benefits.

Since 1987, I have had the opportunity to visit around the world as a facilitator, meeting Kundalini Yoga students everywhere and watching people have better lives because of their experience in White Tantric Yoga. I am humbled to serve as one of the facilitators of this most amazing process, and I’ve never lost my excitement and awe. Even with the great body of work that Yogi Bhajan has given us, he has said that White Tantric Yoga is his greatest legacy.  I am witness to that.

There is only one Mahan Tantric at any given time. There is no job description, nor job for which one can apply. As Yogi Bhajan has said, the crown of spirituality cannot be conquered; it is bestowed.

The video courses he made over the last seventeen years will continue to be used throughout the world. He said, “Whenever you will come to these courses through the television, you’ll go through the energy, but your Subtle Body will tune in with my Subtle Body. So, death for that purpose will never ever mean a thing. But those who will believe that I am dead, I shall be dead for them. And those who shall believe that I live, I shall live a hundred times more powerfully, stronger in them than they have ever experienced.

With these words I would like to tell you that we have an everlasting, loving, beautiful relationship, here, hereafter, unto infinity, and even beyond that. Believe me. Even if you can’t believe it, it is true.”[/box]

SatSimran Kaur is General Manager of White Tantric Yoga worldwide. She serves on the Board of Directors of 3HO

and KRI. She served as Yogi Bhajan’s tour secretary and personal assistant for 17 years. She is the project leader for the Library of Teachings of Yogi Bhajan and supervises the transcription project that is ongoing in Bangalore, India.  SatSimran is a minister of Sikh Dharma and is Secretary of State for Sikh Dharma.

Home › Experiences › Our Stories › The Legacy of White Tantric Yoga