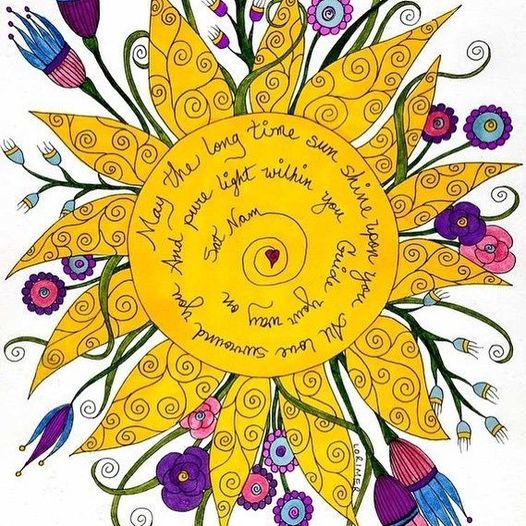 This was written by Robyn Knapton of Los Angeles, California and shared on page 113 of the book, The Man Called the Siri Singh Sahib, which was published in 1979.

In a tiny ashram eight years ago
A young girl sat beginning to grow,
At the foot of her teacher whom she loved so and
She thought she had naught to let him know.
She brought flowers to place at his feet,
And got high as he’d rant and raise high holy heat,
As overflowing crowds learned a new way to cope,
With their lives and their hassles without tricks or dope
They learned to change their “no’s” to “yes,”
And begin to clean up their cosmic mess,
Changed their jeans to purest white,
(Changed their darkness into light)
And she wanted to give him something as bright;
After searching her soul, she found she could write.
As words of devotion flowed from her pen
She knew what to give this king among men:
A gift from the heart given to uplift the world,
Is far greater than gifts that are gilded and pearled.

It’s been eight years and I still live that today,
And my heart still remembers and has more to say…

I remember him sitting surrounded by flowers,
And the faithful would gather and listen for hours,
Candles were lit, incense filled the air.
I remember the colorful shirts he would wear,
Bright as a rainbow, his eyes sparkled youth,
His delivery was funny, his message was Truth.
So simple, so pure and sometimes as a treat
He’d sometimes walk on your back or do a number to your feet …
Sometimes he’d play you a tune on his gong,
Or he’d smile and my world would burst into song.
He told us we would live as kings,
And I learned to eat some very strange things.
I lived around the corner and I’m sure he heard me yawn,
(He’s still the only one who’s ever gotten me up before dawn)

I remember his vision then, as now, pure and clear,
And he confided to a few of us who were gathered near.
He spoke of a time that was soon to come,
He would have a family as bright as the sun –
An army of white, their mission is solely.
Being aware, happy, healthy, and holy.
And some people thought it was nice but a dream.
But I believed in the vision he’d seen,
And as I look around me now,
I see he was right – Wha Guru! And how!

Though I’m not a Sikh and I don’t have a title
I’m alive with a force of love pure and vital,
That grew from a seed he planted eight years ago,
As he touched this young soul and it started to grow,

God, will you tell him what I’ve come to say,
I never left him though I went away,
Called on a mission, I know that he knows,
And wherever I go, a part of him goes,
In the soul of a young girl who still loves him so
And with all her heart wants him to know
She lives Ek Ong Kar and the Sat Nam glow,
Forever is there in her heart a gold “3HO”.