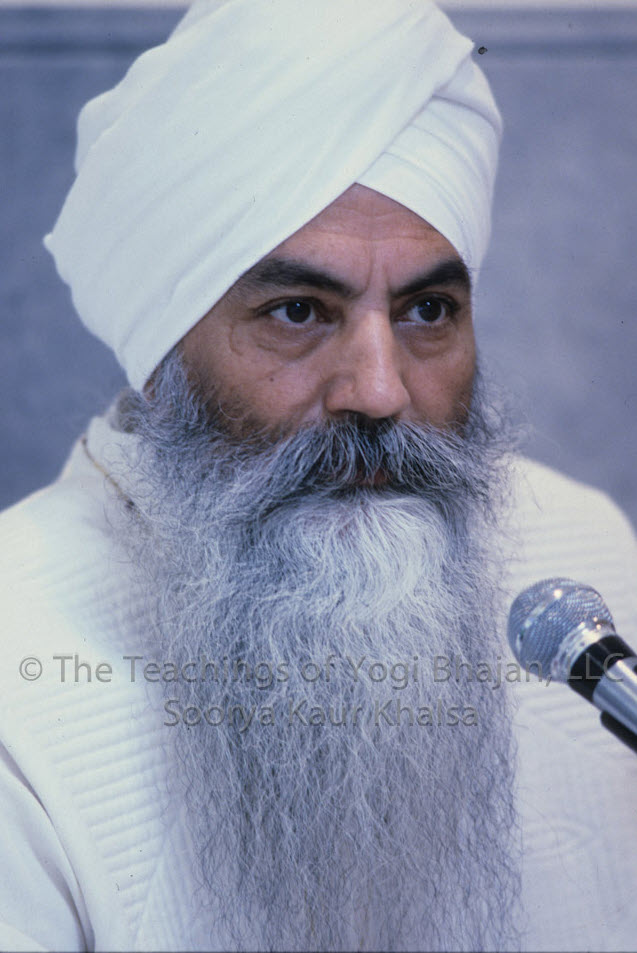 This poem is from page 94-95 of the book “Furmaan Khalsa: Poems to Live By” by Siri Singh Sahib Bhai Sahib Harbhajan Khalsa Yogiji and published in 1987.  Scroll down to see the original poem in Gurmukhi.

The Waves of Life roll on …
No one can ever stop them.
Life marches onwards …
There is no one who can stop it.

The Cosmic Laws of Life,
Come from the Heavenly planes.
Who could ever tire of living a Life like this?

But there are many travelers and many guides
Who have been left behind in the dust.

I, Narindar Pal, sustained by God, walk with steps that never tire.

The Golden Ray of the Inner Sun ever shines within me.
The Silver Ray of the Goddess Moon casts away all darkness.

My Light is God’s Light.
My Story is God’s Story.
The True Guru, the Guru’s essence, lives within my words.

My home is the Sound Current.
My Pranas come from the heavens.
I come from the Infinite One,
And, though all the world may try,
My story cannot be told.

Oh, People! Don’t try to stop me!
Truth is my profession.
Samadhi is my consciousness.

I am called Narsimha, Ravana, and Narindar Pal …
I bow my forehead wherever the True Guru lives,
And utter Har, Har!

Entering into Samadhi, the Yogi says:
We came into the world uttering Har! Har! Har!
Let us never have to visit here again!

Written in the first person, as “Narindar Pal”, this autobiographical poem is filled with a sense of irresistible and triumphant strength. Narshima was an incarnation of Vishnu, a fierce who killed the wicked king Harnaksh.  King Harnaksh forbade all worship of God in his kingdom. Harnaksh’s son was Prahlad, a devoted man of God who worshipped the Infinite One in the form of Lord Vishnu. It was just as the evil king was about to kill his own son that Narshima stepped in and saved Prahlad’s life.

Narshima is known as the “Man-Lion”, the symbol of one who has overcome his animal nature and turned to the power of his human consciousness. Ravana was the “Demon King” who stole Sita from Lord Rama (another of Lord Vishnu’s incarnations).

Ravana is the symbol of the violent, kinetic, unbridled ego. Here the Siri Singh Sahib is saying that people call him many things. Some see him as a hero, and some see him as a demon. But in the midst of it all, he simply bows his forehead wherever the True Guru lives and utters God’s Name!

Here is the original poem written in Gurmukhi