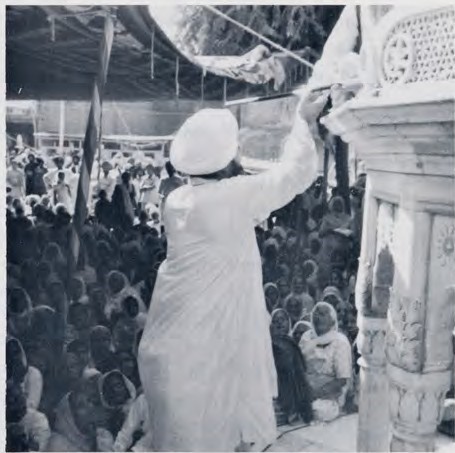 There is One Creator who has created this creation, Truth is His name, infinite, beyond description is His wisdom.  And in His wisdom, he sent a man to the western hemisphere in 1968, who would be the instrument to awaken in the hearts and souls and minds of thousands of people, the love of the Holy Nam and the aspiration to live as Khalsa, the Pure Ones.

One man, Yogi Bhajan, alone, unknown, as God willed, came to Los Angeles in December of 1968 and started teaching. By 1971, when he returned to India with a group of 84 Americans, he had endeared himself to the hearts of thousands of young people by his divine love and compassion, by his understanding of their problems and their needs, and his ability to give them not only guidance, but a concrete method to  work out their own solutions. His first job was to help to rescue the thousands who had fallen victim to drugs. He gave techniques of Kundalini Yoga to purify and strengthen   and heal this human body, which is, after all, the living Temple of God. He taught through his own example and through inspiring stories of Guru Nanak, Guru Ram Das, Guru Gobind Singh, Baba Deep Singh.

All the noble heroes, martyrs, saints and Gurus were introduced for the first time to the Americans who flocked to hear this unusual man teach. His words were so inspiring, his challenge to the youth of America so  stirring, that by the dozens, then the hundreds and soon the  thousands,  they took up the call, to live righteously, to rise early and chant the Holy Nam, to earn their living and share with others, and to go out and teach others what they had  learned.

They found that they had become Sikhs. From whatever background of pain and suffering, whether rich or poor, the young people of America found a reality instead of a ritual in what they learned and experienced about the Sikh way of life from Yogi Bhajan.

In 1971, after two years of loneliness away from his family and friends in India, after two years of struggle to earn a living and to help the young people who were sick in mind,  body and soul, he personally took a group of 84 Americans to India to show them the Holy City of Amritsar, and his beloved Golden Temple, where he had cleansed and  purified himself during four years of washing the floors every night. He brought them to the lap of Mother India, whose vast and ancient culture has preserved and protected all religions through thousands of years.

Humbly going to the House of Guru Ram Das in Amritsar, he was invited to the Akal Takhat, the ‘undying throne,’ chief seat of religious authority for the whole Sikh world. There, in the presence of the entire sadh sangat, a huge assembly, Sant Chanan Singh (President of the Shiromani Gurdwara Parbandhak Committee) bestowed upon Harbhajan Singh Puri (Yogiji) the title of ‘Siri Singh Sahib.’

Sant Fateh Singh (President of the Akali Dal) blessed him, and the Jethadar (head priest) of the Akal Takhat presented him with a Siri Sahib (sword of honor). He was charged with the responsibility to return to the West and establish the Sikh Dharma in an organized way.

The title of Siri Singh Sahib was an unprecedented honor, one which Yogiji was reluctant to accept. However, since the Holy Order came from the Akal Takhat, whose edicts are immortal and irrevocable, he humbly accepted both the title and its obligations.

Those who were present recall that there was a discussion about this unprecedented title, and it was suggested that simply the title ‘Singh Sahib’ should be given. But, Sant Chanan Singh with great foresight said, “No, Harbhajan Singh Yogi will create many Singh Sahibs in the West, so he must be called the Siri Singh Sahib”. And so, it was done. 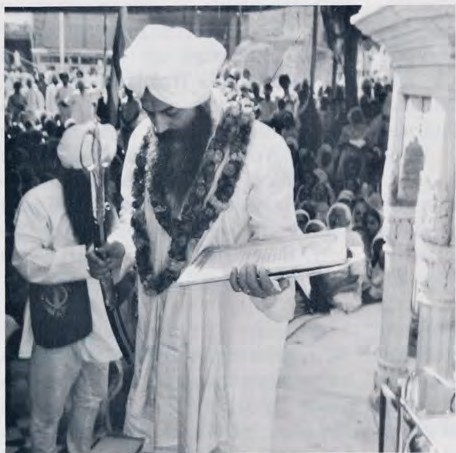 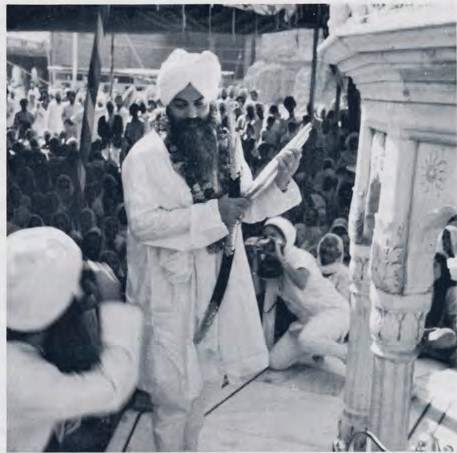 And on March 8, 1971, the letter of authority, empowering Siri Singh Sahib Harbhajan Singh Puri, not only to ordain ministers and perform marriages according to the Sikh rites, but also to administer the sacred Amrit, thus initiating Sikhs into the order of the KHALSA, the brotherhood of the Pure Ones, was duly signed and delivered by the S.G.P.C. The first official leader of the Sikh Dharma outside of India had been chosen at the Holiest of Holies.

In his humility, when Harbhajan Singh Yogi returned to America, he did not announce his new title, he did not proclaim himself as ‘The Siri Singh Sahib.’ Rather, he continued, simply as Yogi Bhajan to teach, to bring more and more people into a healthy, happy and holy way of life, whether they were Sikhs or not. He preached the simple, universal wisdom of Guru Nanak and he became more and more popular and sought after as a lecturer and teacher.

In the ashrams that had sprung up across the country, he taught the students how to conduct Gurdwara Services. He taught them how to hold Akhand Paths (continuous reading from the Siri Guru Granth Sahib). He encouraged them to learn to read and write Gurumukhi. He brought someone to teach Gurubani Kirtan. He analyzed every bit of their lifestyle and gave them the techniques to purify themselves, to transform themselves into Khalsa.

In 1974, when he returned to India for the second time, he had already established Sikh Dharma in the United States of America as a federally recognized religion. He had promulgated the principles of the Dharma and the model of standard behavior for Sikh Ministers had been set forth. He had established the Khalsa Council as the chief administrative body of Sikh Dharma for the Western Hemisphere, and in recognition and appreciation of his selfless service and his significant accomplishments in spreading Sikh Dharma and establishing the order of the Khalsa through his missionary work in the West, he was honored at the Akal Takhat. 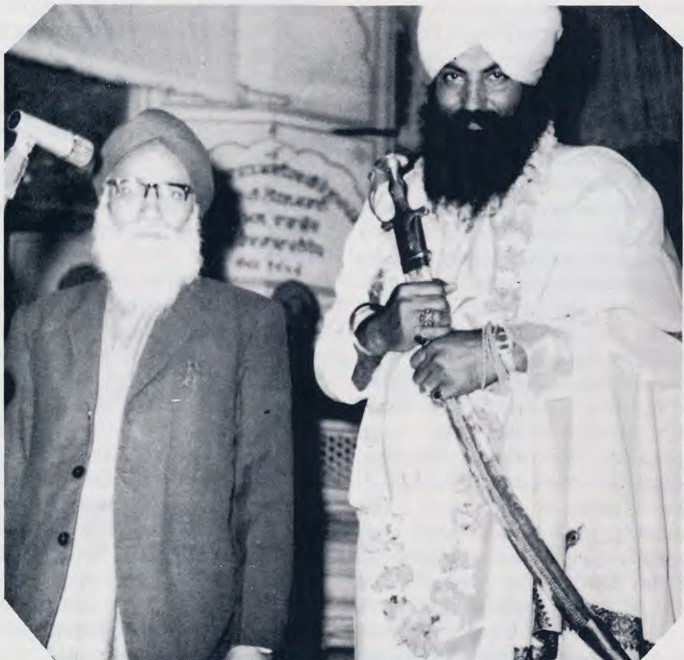 On November 14, 1974, at Akal Takhat Sahib, Singh Sahib Jethedar Sadhu Singh Bhaura (the head priest of the Akal Takhat) conferred upon Siri Singh Sahib Harbhajan Singh Yogi the additional title of “Bhai Sahib” (respected brother). To mark the occasion, the Siri Singh Sahib was presented with a beautifully engraved silver plate, which today holds a place of honor among the archives of the Sikh Dharma of the West and sits before the Sin Guru Granth Sahib at Guru Ram Das Estate in Los Angeles.

Many Indian Sikhs were concerned when they learned that  there  was, in fact, a ‘Chief Religious and Administrative Authority’, for they feared that some man, in that office  might try to become a ‘guru’, and to a true GurSikh, there can never be any man as a ‘guru’, for our only Guru is the Siri Guru Granth Sahib. However, their fears were totally unfounded and as time has revealed, Siri Singh Sahib Bhai Sahib Harbhajan Singh Khalsa Yogiji, in spite of his lengthy list of titles (which include his being Master of Kundalini Yoga and Mahan Tantric) has never imposed his personality or his personal leadership on any Sikh, rather, he has given himself to serving humanity in his capacity  as Siri Singh Sahib.

For the Sikhs in the Western Hemisphere, he is the Siri Singh Sahib. As he puts it, “I am the leader for the Sikhs, not the leader of the Sikhs.” His humility and desire just to serve is exemplified in this definition of the Siri Singh Sahib in action. He says, “My birth and my life and my end are meant to serve, to console, to inspire, to share the sufferings and to take the suffering and that all is the happiness.”

“I firmly, honestly and truthfully feel that I am much, much and very much lower than the dust under the feet of those who have uttered ‘Sat Nam’ once, and that too by mistake. Therefore, each one has the right to call and ask, and it is my privilege to serve.” (reprinted from Beads of Truth, No. 24, September 1974)

As history records, there has always been opposition to truth, always been a battle whenever a great spiritual light emerges on the horizon. In September of 1977, TIME magazine, with malicious intent to damage, to slander and to defame, did print an article about the Sikh Dharma which is full of outright lies (they quoted people who have never been interviewed), false allegations, vicious insinuations and derogatory innuendoes.  The article is an insult to the entire Sikh world, and Sikhs throughout the world are outraged. In London, in a public demonstration in front of the TIME offices, 2000 GurSikhs publicly burned copies of TIME magazine. Letters and telegrams of protest and condemnation of TIME’s unwarranted attempt to tarnish the image of the Siri Singh Sahib have poured in.

We are a very strong nation and we must protect and cherish our religious heritage and preserve it for our children, and our children’s children, and for that reason, to bring the  light of truth to bear, we call upon every one of you to write to TIME magazine your personal protest, and send us a copy for our records. Let us leave a legacy of Truth and honor for our future generations that may blot out TIME’s infamous misuse of journalistic privilege.

Let us not forget that this one great holy man, Siri Singh Sahib Bhai Sahib Harbhajan Singh Khalsa Yogiji, has changed the consciousness of the American woman from a ‘chick’ to an eagle! He has brought decency and dignity into the lives of hundreds of thousands. He is a fearless champion of woman’s right to self-respect and through his teachings has provided her with the ability to live in her grace as a true woman.  In 1970, September 22, he established the Grace of God Movement for the Women of the World. Women from all over the world have enthusiastically acclaimed the annual Women’s Training Camp, which he conducts under the auspices of the 3HO Foundation in New Mexico each summer. In two four-week sessions this year, they listened to the Siri Singh Sahib’s lectures, practiced and perfected the exercises he taught them, learned the arts and skills of self-defense, riflery, marching, sang songs and played musical instruments in sheer joy and celebration of God’s blessings manifesting through them. They have conquered obstacle courses, not only of six-foot walls to scale, but have conquered those inner fears and insecurities that are native to the American woman’s subconscious mind.

Father, guide, counselor, mentor and friend, the Siri Singh Sahib has elevated woman to her rightful place as Grace of God, the mother of mankind, the bearer of heroes, saints and givers. Sat Avatar Singh, aged five, was overheard scolding a little two-year-old girl who had wandered out of her tent at Summer Solstice without any clothes on. “Siri Singh Sahib says no Khalsa woman goes around without clothes!” Her lip trembled, tears came, but she went back in and put on her clothes!

In the world of insanity, the Siri Singh Sahib is teaching people to live in cozy homes, not crazy homes. Is it any wonder that he is slandered? Each day we become more and more aware of God’s hand guiding us through all the negativity to strengthen our devotion, to test our commitment, to challenge our understanding.

God is great. We give our humble thanks to Him for sending Siri Singh Sahib Bhai Sahib Harbhajan Singh Khalsa Yogiji to us. God Bless him. Wahe Guru Ji Ka Khalsa, Wahe Guru Ji Ki Fateh! (The Pure Ones belong to God; all victory belongs to God!)