The Unstruck Melody: Understanding the Science of Naad Yoga 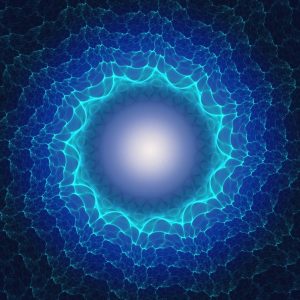 The word Naad simply means sound. The word Yoga means union or “to yoke.” Union with sound is the goal of Naad Yoga. To understand what that means we have to think about the nature of sound itself.

In yogic terminology there are two kinds of sounds in the Universe, Ahad sounds and Anahad sounds. Ahad sounds are sounds created by something striking something else. If I pluck the “A” string of my guitar, it will vibrate 440 times per second, creating a vibration in the surrounding air that transfers that exact vibratory rate into the surrounding environment.

Anahad literally means the un-struck melody. In yogic cosmology and science it is said that the Universe is made of sound. All matter is vibrating at certain frequencies. Rocks and stones have a very slow and low frequency. Color and light have a high frequency and can travel through the vacuum of space.

Beyond all physical phenomena and matter is the primal creative sound vibration that began the creation. In Christianity it is called The Word. Sikhs call it the Naad. It is what scientists call “Cosmic radiation”—the constantly creative sound left over from the Big Bang. Yogis call it Anahad. Whatever one calls it, it is constantly vibrating, creating, and expanding the Universe—infinitely, endlessly.

Beyond the mind to grasp, one can only surrender to hear the Anahad sound and contemplate it with wonder. As Guru Nanak, the first Sikh Guru, said, Keeta Pasao, eko kavao, tis teh hoe lakh dhariou. Kuderat kavan kahaa veechar varia na javai ek vaar, which means: “One Gesture and One Word, and the ten thousand rivers of life began to flow. How can I speak or reflect on this power?”

Oh my ears, you were meant to hear only the True Name,
And for this reason were you given to a man—that
You might hear the Word (anahat),
Which having heard, the mind and body blossom forth,
And the tongue is filled with the nectar Name.

The human body is designed for Naad Yoga. The ears are designed to carry the exact pattern and frequency of sound vibration which is funneled through the outer ear and strikes the eardrum, creating a perfect replica of that vibratory rate and frequency. This vibration is then transferred to the three bones of the inner ear, and then to the inner ear canal and its mechanism, and then directly to the neuro-endocrine systems of the brain and physical body.

By meditating deeply (sunia) on the primal sounds—sacred mantra, and poetry (Gurbani), we can experience a profound awakening of human potential.

The interplay of the tongue on the meridian points of the upper palate and the action of the lips, nose, throat, and the air passages of the body are directly linked to chemical and hormonal secretions in the brain and glandular system. Through sound, speech, chanting, singing—communication—we can directly and scientifically affect our own level of consciousness, as well as our physical health and well-being and that of others.

One time in my early stages of yoga practice, I was in a very un-balanced state of mind. It was a stage of complete doubt called Shakti Pad. In those days we would have said simply that I was “freaking out.” I had an opportunity to speak with my spiritual teacher, Yogi Bhajan, about it. He was in town leading a White Tantric Yoga course, which I did not attend, and he asked where I was. “He is freaking out,” my friends told him. “Get him,” he said.

They were able to find me at work and I pulled myself together and hastened in to see him. “What is happening?” he asked. I told him, “Sir, I am in total doubt and cannot meditate or do yoga.” He looked at me and said, “All the planets, moons, stars, and solar systems are revolving in cycles and patterns in a perfect rhythm and harmony. Just take up any of your instruments and play melodic rhythmic patterns on them and you will come into balance and harmony.”

He then told me that as a teenager in India he used to practice a martial art called Gatka, and that he was always getting hit on the head by his opponents during practice. His teacher told him to study tabla (Indian drum) and that by mastering rhythm, he would master the art of fighting. Yogiji then sent me to Punjab, India, and suggested that I study Gatka, tabla, and kirtan (singing divine poetry), which I did, and I’ve been grateful ever since for that opportunity.

That very complete study of rhythm called Taal, as well as the study of melody called Raag, is another very important component of Naad Yoga. Together they make up what we know as music. The power of music to heal has been well documented in recent years as well as illustrated in the Bible in the famous story of David healing King Solomon with the music of the harp. The ancient seers of India understood this power to transform, and it was common for mantra and scriptures to be sung as a way to increase their meditative power. 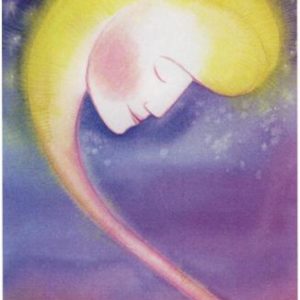 For a moment imagine the human body as a musical instrument, especially one of the Indian instruments like the Sitar or Sarangi, which have playing strings that are struck or bowed, and also have 40-odd strings which are never played but are sympathetic strings. When the playing strings are struck, they set up vibratory frequencies that begin to sound the finely tuned but un-struck sympathetic strings.

These strings pick up the frequency and vibratory rates of the struck notes and begin to sound and create incredible overtones without being physically touched. It is this design that gives these instruments their unique and meditative sound.

The human organism has a similar design. In Yogic terms, we have the central pranic energy channel (shushmana) corresponding to the spinal column. To either side of it are the ida and pingala, the energies of the sun and moon. Think of these as the playing strings.

These energy channels then connect with 72,000 nadis (energy channels) loosely corresponding to the nervous system, that extend throughout the body. Think of these as the sympathetic strings. Whatever we vibrate in the shushmana begins to set up a sympathetic vibration in the ida and pingala and throughout the nadis that transfer that vibration to all the cells of the body.

If we are unconscious in our speech and what we are vibrating, we can set up waves of negativity, self-doubt, and disharmony. These things lead to a deteriorating state of health and well-being. On the other hand, we can consciously choose mantra, scripture, harmonious communication, and musical sounds that elevate, heal, and balance us. Naad Yoga is the practice and experience of all this on a very practical and scientific level of self-exploration.

Each Jap, or repetition, of these sacred sounds brushes off a layer of unreality that causes us to falsely identify with the ego and opens up our inner channels to the Divine energy of God. It is a question of awareness, brain chemistry, vibratory rates and frequencies, and the Grace of God. 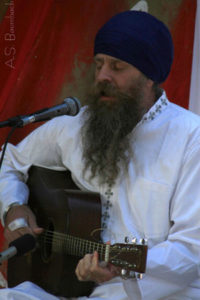 Mata Mandir Singh has been a student of music since the age of 7 and began the study and practice of Kundalini and Naad Yoga with Yogi Bhajan at the age of 19. He has recorded about 20 CDs of meditation and mantra music, plays concerts, and teaches Naad Yoga workshops all over the world. His web site is www.yogaofsound.com