Written by M.S.S Gurutej Singh Khalsa, as it appeared in the Winter, 1983 Beads of Truth.

The three arrived from the East that day.
They had come to gather the people to say:
“We’re here in order to take a stand,
We’re here in order to change this land.
This nation is sick, its direction wrong.
We three have come to gather the strong.”
What three could make a statement so bold?
Their presence had left you with nothing untold.
These three that stood and walked as one:
Magnificence of spirit; sons of the sun.

The Siri Singh Sahib spoke with words of fire
That lit the pure and burned the liar:
“I warn you this day, don’t challenge my might.
I’m Saturn, I’m Judgment, Quintessence of Right.
I’ll hammer, confront you ’til ego submits.
My job is to shatter your wrong into bits.”

“My vision sees past your limited being,
Your Infinity, your glory, your future I’m seeing.
Stand to my fury; your spine becomes steel,
Follow my judgment; your life becomes real.
I know who you are and demand your best,
It’s only in that that your future will rest.” 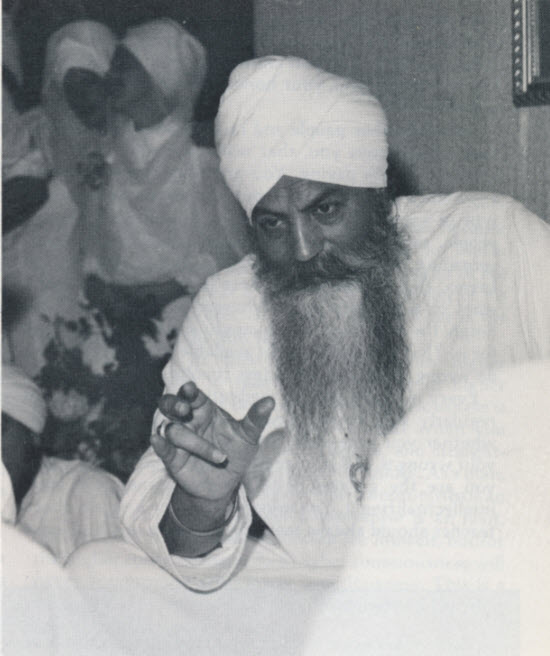 As the Siri Singh Sahib finished, Yogi Bhajan began,
Flowing together as if by plan.
“You all have eyes as well as me,
The times ahead are plain to see.
Master yourself and learn to relax
Or suffer and struggle, then pay death’s tax.”

“Fly or crawl, it’s up to you,
Though you must account for all that you do.
I’m here as your servant to give this Science.
It’ll heal your wounds and end your defiance.
Leave it or take it, my heart pleads the latter,
Your courage and grace will make your life matter.” 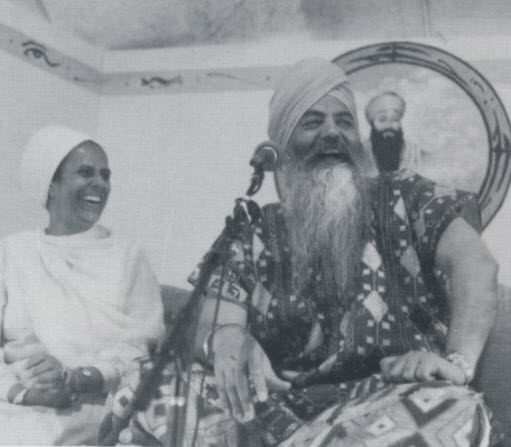 Harbhajan Singh began as Yogiji ended
With voices that seemed to be perfectly blended.
“You may do what you may, but it’s all God’s will.
Play out your karma, so you can be still.
Everything’s fine, so let yourself go.
God is your friend, though you think Him your foe.”

“God is your essence, Guru your soul.
You are the pure one, a part of the whole.
Just walk together and don’t let go,
We’ll make it, it’s written, just let your love flow.”

Stillness descended as all three stood still,
Three gazing together with great strength of will.
The master had spoken, the yogi had taught,
The man was the man that everyman sought.
But who are these giants of such noble birth?
These words of power, clarity and worth?

History is writing the answer to this.
That answer will lead our children to bliss.
But we know now these three men are one.
This warrior prince of the Longtime Sun.