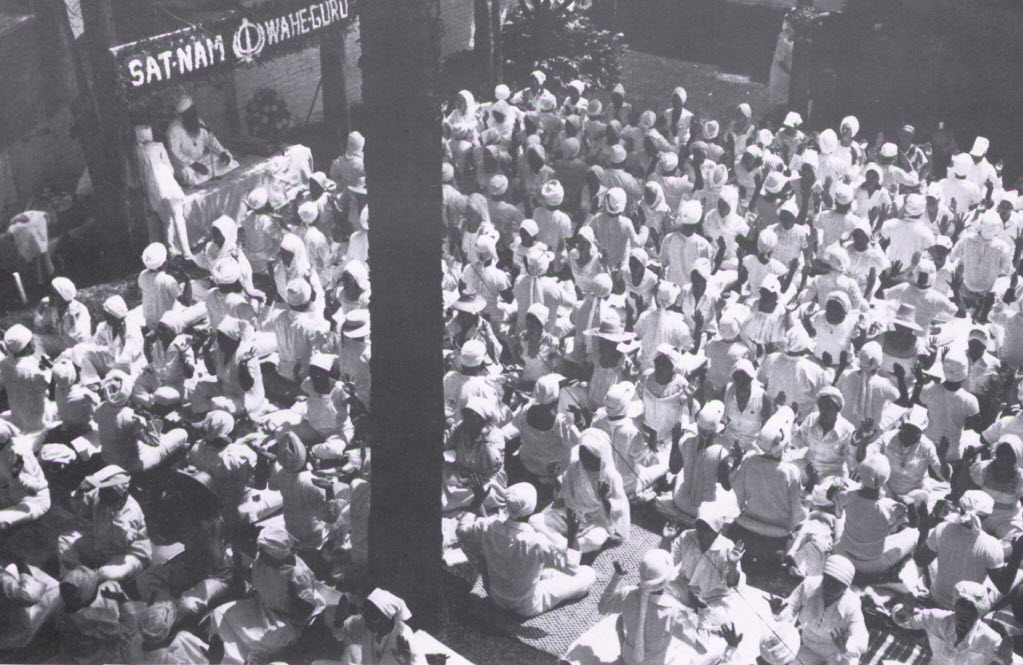 Written by Siri Tapa Kaur Khalsa and shared on page 163 of the book,  The Man Called the Siri Singh Sahib, published in 1979.

My first direct contact with “Yogi Bhajan” was during a five-day fall white Tantric Yoga course in Washington, D.C. I’d been taking Kundalini Yoga classes for about a year, and I was greatly anticipating the “White Tantric Experience.”

Ever since my teacher first mentioned White Tantric Yoga – the “yoga between men and women”, I’d wanted to do it.  And there I was finally, in a turban and white clothing, lining up with all those other people, waiting to look into a man’s eyes and truthfully communicate.  After at least an hour of chanting, the Siri Singh Sahib arrived, and the course began.  The exercises were, of course, incredible, but the Siri Singh Sahib was even more amazing.  After all, he was the one directing the whole scene.  More impressive than his actions, were his words.  He talked to us all in such a strong, yet close and warm way.

I remember my teacher asking me after the course, “Well, what do you think of Yogi ji?  My response was, “I’ve never listened to anyone like that before.”  There was something so magnetic about his words, I couldn’t daydream or fall asleep, even though I’d never previously managed with only four hours of sleep a night.

Although he lectured to a whole group of different people, I felt the Siri Singh Sahib was talking directly to me.  It seemed he knew what was on my mind and therefore could end all my confusion, which was great, as I was for the first time intensely experiencing Sikh Dharma and the 3HO lifestyle.

I went to the White Tantric course as a yoga student from Smith College. I returned as a newly inspired member of 3HO.  Wahe Guru! I was high in the bliss on the teachings the Siri Singh Sahib shared with us and the chanting of the Nam.

Now, more than two and a half years later, I’m married and expecting a child, to be raised according to those and many more teachings of Yogi Bhajan and Sikh Dharma.  I’ve made the commitment to live as Khalsa and raise my children as Khalsa, all thanks to Siri Singh Sahib Harbhajan Singh Khalsa Yogi ji.  May he be blessed!