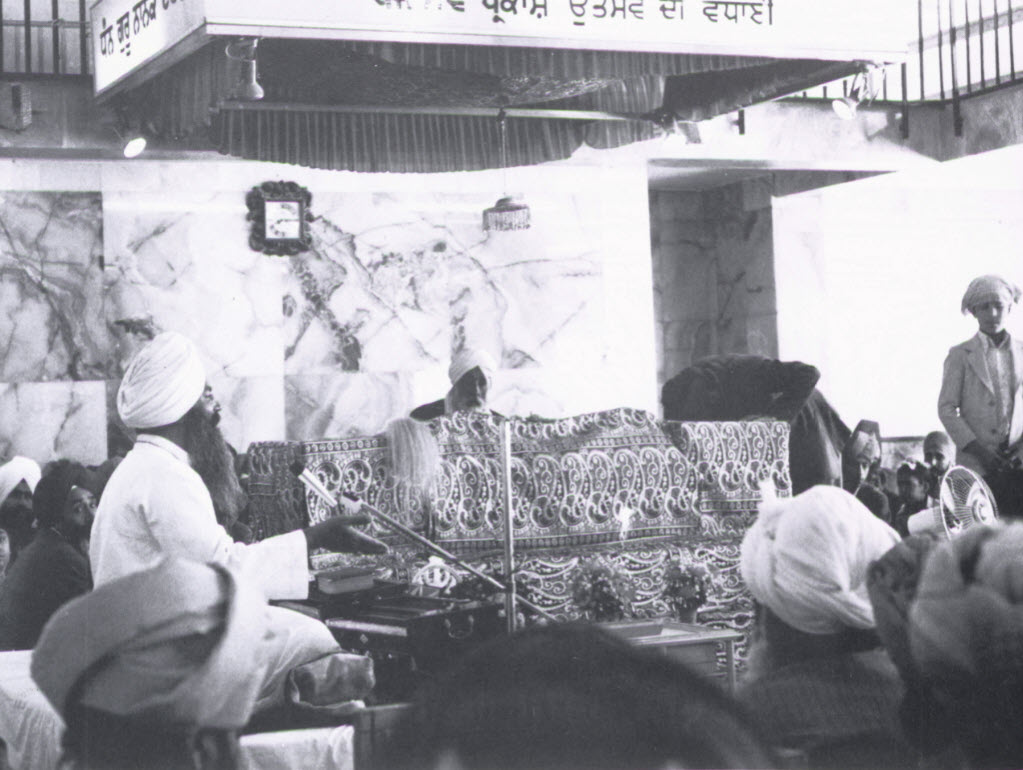 These two letters are from page 131 of the book, The Man Called the Siri Singh Sahib, published in 1979.

Everything is fine here, and it is a joy to be in Tucson.  I wanted to share with you something that came into my consciousness tonight as I was meditating:  There was a large Gurdwara, completely filled with Sikhs who were listening to the divine Keertan of the Raagees.  A young man was sitting as Guru Granthee, waving the chauree over the Guru and moving his lips in the repetition of Wahe Guru.  The smells of Guru-Kaa-Langar floated in with the breeze.  And in this blissful union came the ten Gurus bowing humbly before the living Guru, the Word of God, and Truth of Truths, the Guru Granth Sahib.

Nanak Dev Ji brought a vision of a world filled with love.
Angad bore the Gurmukhee script, God’s praise with which he sung.
Amar Das Guru Ji carried the burden of feeding the poor.
Ram Das Ji laid the dust of the saint’s feet before the Lord.
Arjan Dev placed down his holy task, a perfect collection of Truth.
Hargobind gave his two swords, ignorance and doubt they smote.
Har Rai bought his wisdom bowing low before the Lord.
Harkrishan’s self-sacrifice was placed beside his hope.
Teg Bahadur gave a lesson for all mankind to see.
Gobind Singh submitted his strength, bowing low he looked so tall.

As Guru Gobind Singh sat down amongst the Sangat, my mind and heart looked for you because I had not seen you come in with them.  I looked over the entire sangat but could not find you.  Finally, I found you at the entrance to the Gurdwara, receiving the shoes of all those who came and placing them neatly on racks, dusting them off and caring for them totally.
You had taken the shoes of the lowliest dishwasher and the sandals of Guru Ram Das, they were one and the same to you.  Many came, many went, yet each pair of shoes was like God’s Name to you.  But this Gurdwara, unlike others, would never end.  It was bound by no earthly ties…

The swords were still dripping and our hands are still bleeding, but our hearts and minds have been placed safely before the Lord.

As you spoke at Gurdwara last Sunday, I couldn’t help but ponder on this one thought: why has the Siri Singh Sahib chosen this baanaa of his, and yet inspired us with the baanaa of the tenth master?  Before, I have always understood it from the standpoint that the Siri Singh Sahib is beyond the laws of time and space.  There was never any doubt in my mind and there isn’t now.  But during Gurdwara, I thought I saw another answer.  That is, that your baanaa is the form of the founder of our Dharma, Guru Nanak Devji.  That your mission like his was and is, to instill the true values of what it means to be a seeker of Truth.  And yet you also carry with you the guidance of Guru Ram Das and the spirit of Guru Gobind Singh.  And you have projected us, your students, into the ultimate reality of being Sikhs, of being Khalsa in the image and form of Guru Gobind Singh.

Through the simple correlation of form, yours into that of Baba Nanak and ours into Guru Gobind Singh, you have initiated our destinies and then made us to live to their final outcome – giving us the wisdom and experience of all our ten Gurus and the living Guru, the Siri Guru Granth Sahib.  Perhaps not since the actual time of our Gurus, has such an opportunity been afforded to a Sikh.  I feel totally blessed and very grateful.  My prayer is that Guru Ram Das shall never leave your side as He guides this mission and grants you His protection.